The Treasury yesterday tweeted duty-free goods are ‘coming back’ if the UK crashes out of the European Union without a deal.

The move could slash the price of a bottle of wine bought at Heathrow Airport duty-free on the way to the EU by £2.23.

But Mr Hancock told critics to ‘leave it with me’, after he was challenged about the announcement at the Public Health England conference. 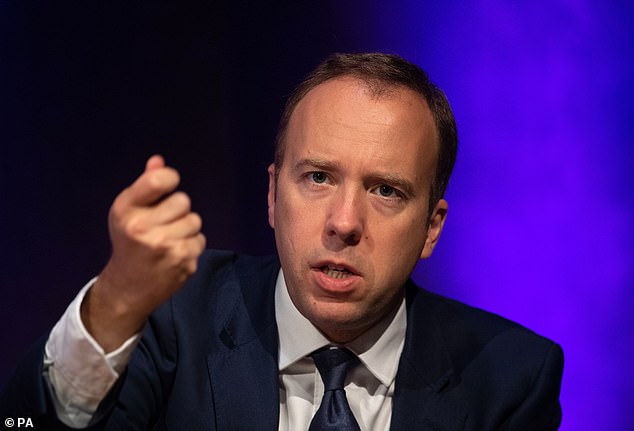 Health Secretary Matt Hancock worries the promise of duty-free goods even if the UK leaves the EU without a deal may be bad for public health. He is pictured at the Public Health England Annual Conference at the University of Warwick today, where he made the comment

Matthew Ashton, director of public health for Sefton, questioned Mr Hancock about the post by Treasury.

‘There appear to be some differences in approach, between your vision for health and social care and the one taken by the Treasury,’ Mr Ashton said.

‘Your vision around smoke-free by 2030 – an incredibly important message – to the narrative coming out of the Treasury, around post-Brexit and duty-free; the ability of communities to access cheap booze and fags and how great that will be.’

‘How can you get your vision for public health and prevention across to the whole of Government, including Treasury, and how can we support you to do that?’

WHAT ARE DUTY FREE GOODS? AND HOW WILL BREXIT AFFECT THEIR SALE?

Most often at airports, travellers who are leaving a country can save on items like alcohol, tobacco, cosmetics and fragrances.

The prices are based on where the store is and exchange rates.

In September 2019, the UK Government announced that even in the event of a no-deal Brexit:

Mr Hancock, who earned laughs from delegates attending the conference, said: ‘Yeah, I saw that tweet. We’ve got to keep winning this argument.

‘Look, I don’t think the return of duty-free was really seen from within a public health context, shall we say, before publication.’

In front of the crowd at the University of Warwick, he added: ‘Certainly, I didn’t see it before publication but – leave that one with me.’

‘Duty-free shopping with the EU is coming back, if we leave without a deal,’ it read.

‘People travelling to EU countries will be able to buy beer, spirits, wine and tobacco without duty being applied in the UK.’

As well as the tweet, Chancellor of the Exchequer Sajid Javid announced yesterday the return of duty-free shopping with EU countries.

‘As we prepare to leave the EU, I’m pleased to be able to back British travellers,’ he said.

‘We want people to enjoy their hard-earned holidays and this decision will help holidaymakers’ cash go that little bit further.’

The changes are possible because, if Britain leaves without a deal, we will no longer be subject to EU single market rules which have been in place since 1999.

The Treasury added it will shortly be consulting on its long-term strategy on duty-free.

One asked why we were ‘celebrating’ the news given ‘smoking kills 1,000s’, while another questioned the message this was sending the public. 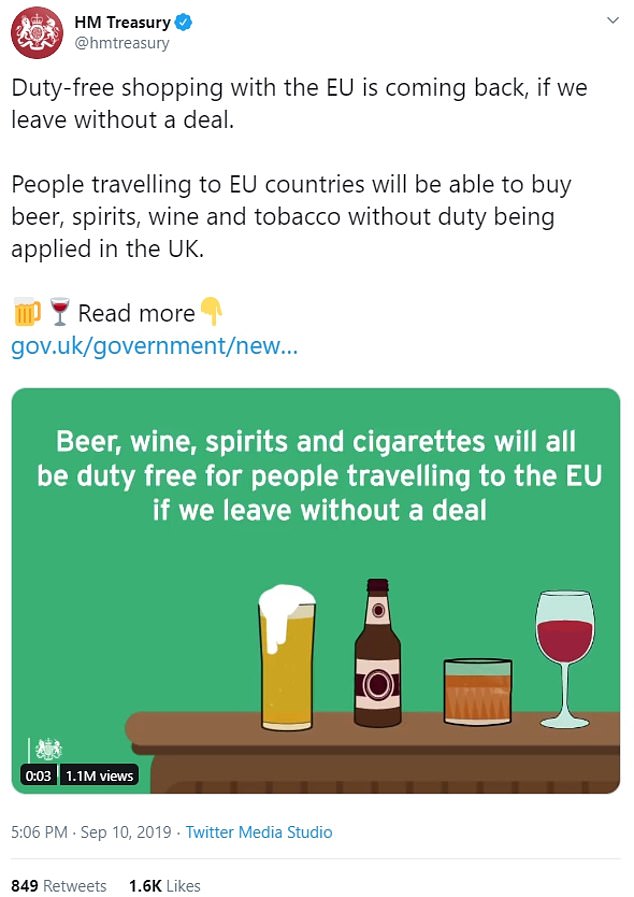 The Treasury’s official account posted yesterday ‘duty free shopping is back, if we leave without a deal’. The post attracted 1,600 thousand likes and more than 800 retweets

In an earlier keynote speech on the final day of the conference, held at the University of Warwick, Mr Hancock said ‘marginal gains’ in public health could lead to big advances in the 2020s.

Turning his attention to the 14 per cent of Britons who smoke, he called the habit ‘the leading cause of illness and early death’.

‘So how do we get that 14 per cent closer to zero?,’ Mr Hancock asked.

‘Our Prevention Green Paper sets an ambition for England to be smoke-free by 2030 and I believe we can get there.

‘Ten years to get people to give up cigarettes or switch to less harmful alternatives.

‘It’s a big ask. I am confident we can do it but we have to work together to get there.’

In a later statement, Professor John Newton, PHE’s director of health improvement, added: ‘Accessibility and affordability makes a huge difference to consumption of tobacco and alcohol and that will remain our advice to Government.’