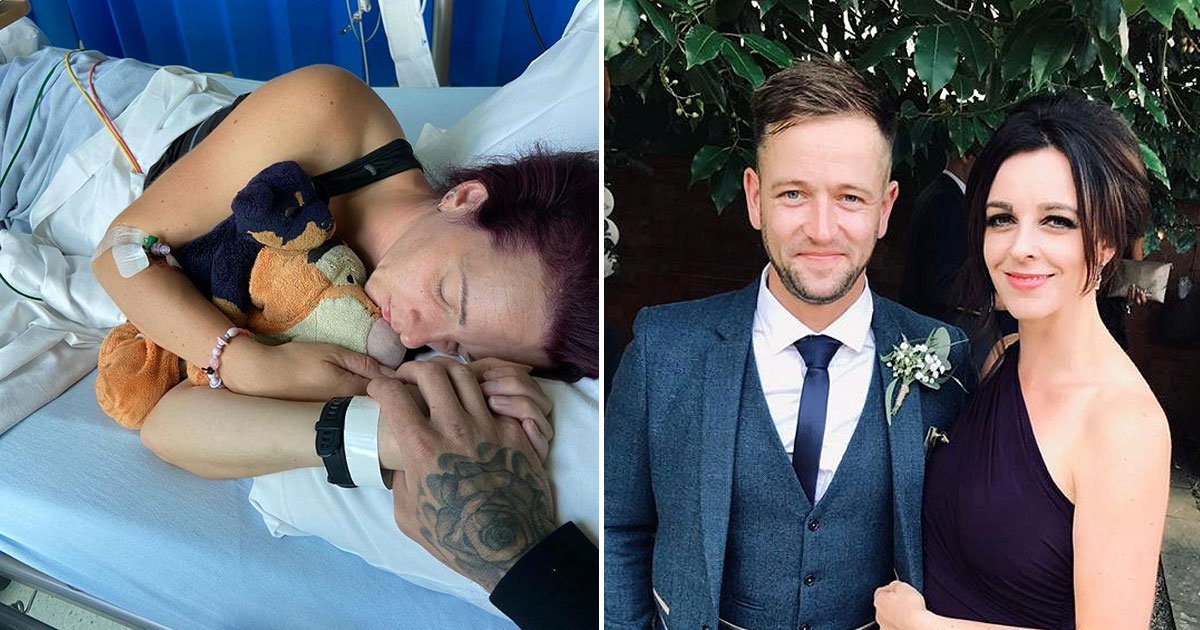 Everything was normal when Catherine Fahey, a 34-year-old university administrator from Lincoln, went to bed on the night of her 13th wedding anniversary.

It was only when her husband, 34-year-old Kyle, a lead maintenance engineer, came up to bed that he realised something was wrong.

Catherine’s mouth was sagged significantly on the left side and her speech was slurred – she was having a stroke.

‘I had absolutely no idea, in my head I thought I was talking and acting fine, but I wasn’t,’ said Catherine.

‘[Kyle] got me to try and stand up and put both arms out in front of me, but I had zero mobility in my left side.

‘I even tried drinking water but it just fell out of my mouth.’

Recognising her symptoms thanks to adverts by the Stroke Associations, Kyle acted quickly, first calling an ambulance and then, in the face of a two hour wait, driving his wife to the nearest hospital at 1am on 19 September 2022.

The pair had to leave their children Alfie, 14 and Bella, 11, behind, not wanting to worry them.

‘He literally had to fireman’s lift me down the stairs and into the car,’ said Catherine, who arrived at Lincoln County Hospital in the early hours of Monday morning.

‘When we got to A&E Kyle just dumped the car and didn’t realise he was in the ambulance bay.

‘He ran in to get a nurse and it was when I saw her face I knew something was really wrong.’

Catherine got a CT scan straight away and was treated for a stroke.

The medication she received, alteplase, works most effectively within the first four-hour window.

‘Luckily because he acted so fast, the doctors were able to treat me really quickly,’ she said.

‘I was on the medication within an hour.

‘I didn’t really feel scared but I felt so confused.

‘I saw Kyle was upset and the nurse said to him, “this is all down to her now – how she recovers”. I just gave it everything.

‘Looking back I never thought I wouldn’t be able to walk again, I’m really stubborn.’

Alfie and Bella went to visit their mum on the critical stroke unit the following day and, after a miraculous recovery, Catherine was discharged on 21 September, 2022.

‘My mouth on the left-hand side is still a tiny bit sagged, and I have some blurred vision, but I have been completely discharged from physio and speech therapy,’ said Catherine, a fitness enthusiast.

‘I’m on cholesterol tablets and blood thinners for life, and because my vision is blurred I now how to wear glasses.

‘I can’t push myself exercise wise as much as I used to, and I’ve been advised to make sure when I go on runs I’m not alone.

‘I have to keep an eye on my heart rate zones when I’m exercising too.’

While it can be ‘frustrating,’ not being able to do the things she’s used to, and being told what she can and can’t do, Catherine is ‘grateful’ to be alive.

Now, she wants to help raise awareness of stroke symptoms, which she plans to do while running, now that she’s been cleared to build up to light exercise.

‘I’ve got another race booked for July 2022 to give me something to work towards, and I’ll be wearing a top with the Stroke Association’s details on there.

‘Me and Kyle were joking the other day about 13 being unlucky for some, and how it all happened on our 13th wedding anniversary.

‘The reason he knew what to do was because he’d seen the Stroke Association’s adverts recently.’

She said the fact that her life was saved is a credit to how well her husband knows her.

‘Kyle absolutely saved my life – and on our wedding anniversary too.

‘It’s just amazing how he knew.

We’ve been together since we were 19 and married at 21, so I feel like he just knows me so well.

‘If it had been anyone else around me they wouldn’t have known the way Kyle did.

‘It means the world what he did for me.’