London Marathon runner, 53, was left fighting for her life after drinking too much water during the hottest race on record

A London Marathon runner was left in a coma after drinking too much water during the race.

Johanna Pakenham, 53, drank more than a dozen bottles of water to try and cope with the heat, and has no recollection of crossing the finish line.

The mother-of-four later suffered a seizure at home, with her partner being forced to perform CPR to keep her alive until the ambulance arrived.

According to The Met Office, the latest London Marathon was the hottest on record, hitting highs of of 23.2 C.

Now fully recovered, Ms Pakenham is speaking out to raise awareness of the dangers of drinking too much water while running. 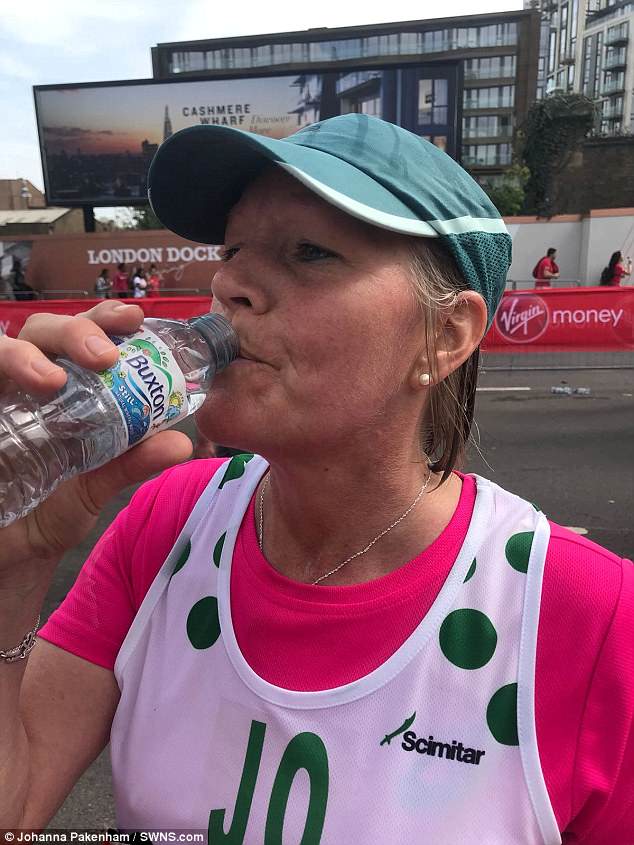 Johanna Pakenham was left fighting for her life in a coma after drinking too much water during the London Marathon. This caused her to suffer from abnormally low sodium levels 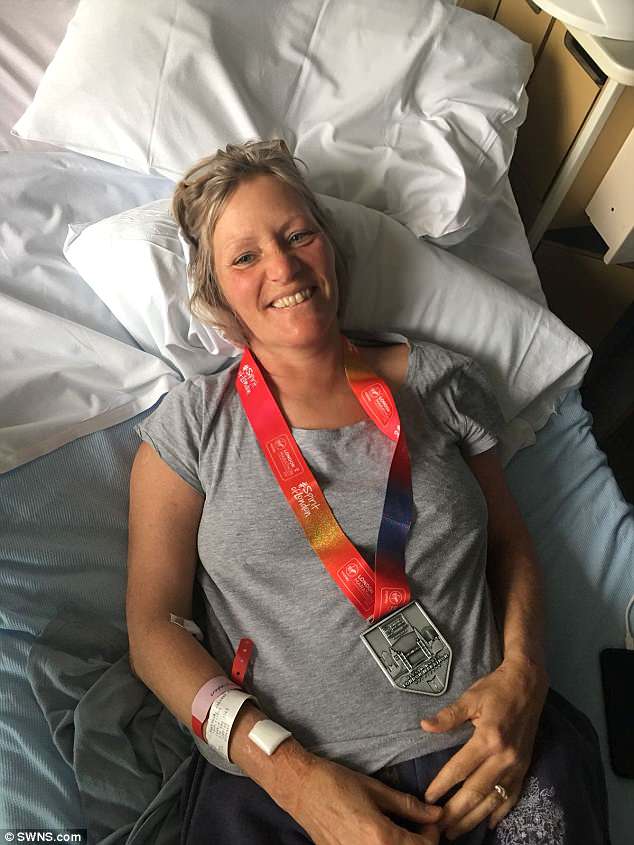 After suffering a seizure at home, her partner performed CPR until an ambulance arrived 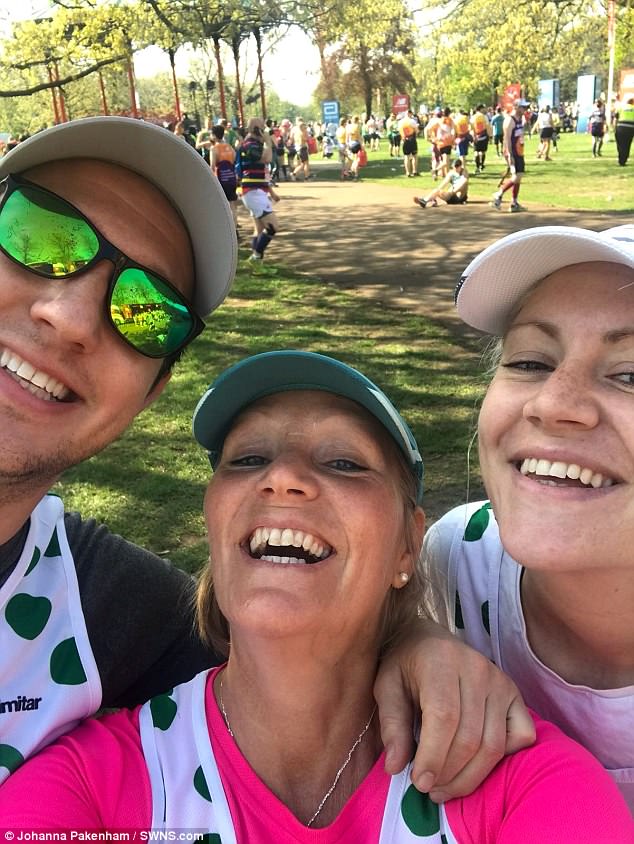 ‘There is such a thing as too much water’

Ms Pakenham said: ‘I love running and I’ve been doing it for years. I’ve taken part in four marathons, although this was my first one in 15 years.

‘I remember starting the race but around half way through is when things start to get hazy.

‘I saw my family at the beginning and apparently, I saw them three times throughout, but I have no recollection of that.

‘I remember my dad’s voice in my head saying “make sure you stay hydrated” but without the electrolytes, the water was doing more harm and making me worse, there is such a thing as too much water, which I learnt.’

‘I have no recollection of it’

Ms Pakenham believes she drank a small bottle of water at around 20 stations along the route but was not replenishing the electrolytes she lost with ‘energy’ drinks.

She said: ‘I had about 400 metres to go and I remember saying “I’m wobbly” and my family couldn’t believe I wasn’t going to cross that finish line.

‘There’s a picture of me taken at the starting line and I look fine, then I had a photo taken at the finish line, I have no recollection of it being taken.

‘I don’t recognise that woman in that photo.’ 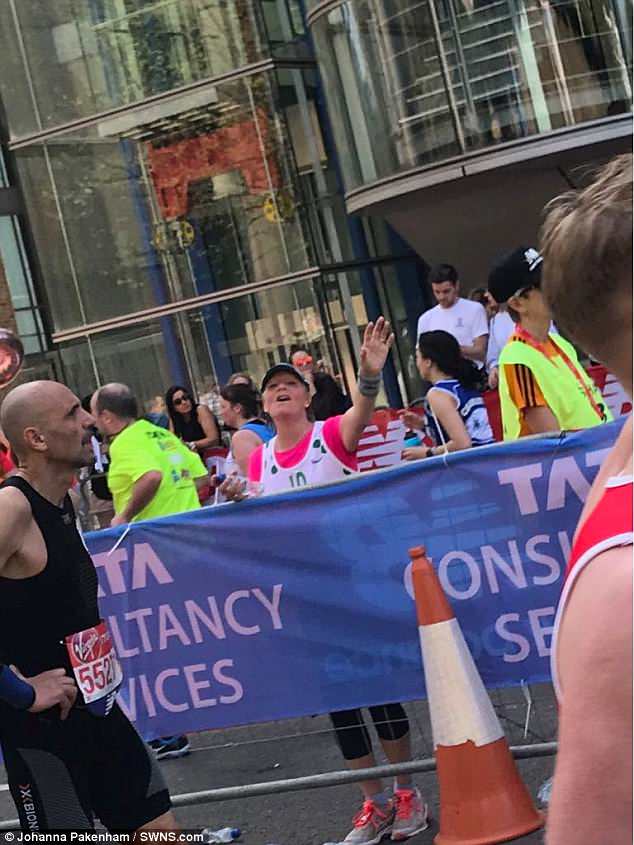 Sodium regulates the amount of water in and around people’s cells.

Hyponatremia causes the sodium in people’s bodies to dilute, which leads to a rise in water levels and swollen cells.

Causes can include drinking too much water, particularly during endurance events when sodium is lost through sweat.

Other causes may include taking certain medications, like antidepressants, as well as heart failure, extreme vomiting or taking the recreational drug Ecstasy.

Treatment focuses on addressing the underlying cause, if possible.

In non-serious cases this may include people altering their diets to include less water.

‘I had a massive seizure’

Ms Pakenham completed the race in six hours 35 minutes but is unable to recall much until waking up in hospital several days later.

She said: ‘The plan was to go out for pizza but apparently I said I was feeling sick.

‘I started driving back with my daughter Emma and my partner, Richard, when they noticed how unwell I was in the car.

‘When we got back they called 111 but by the time we’d gotten through all the question they were asking, I had a massive seizure, which is a common reaction to hyponatremia.

‘My family immediately called 999 and Richard was the one who administered CRP until the ambulance arrived, I think they managed to get me breathing by that point.’

‘I lost about a week altogether’

Ms Pakenham was taken to Winchester Hospital and kept in intensive care, where she fell into a coma for the next couple of days.

She said: ‘I remember nothing from that Sunday right through to Tuesday.

‘I think I woke up and spoke a little on Wednesday, to be honest, even the next few days were blurry until Saturday. I pretty much lost about a week altogether.’

Ms Pakenham has since seen a heart specialist and had follow-up tests. There is no sign of her being permanently affected by the incident.

She said: ‘From what we can tell it was just a one-off, the doctor says I’m perfectly fine to go running again.

‘I just want people to make sure they’re taking in the right electrolytes as well as water so this doesn’t happen to anyone else.’