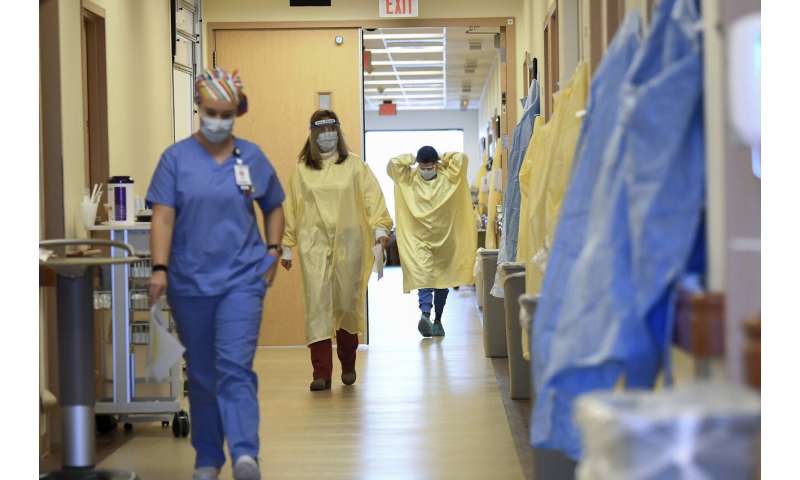 Ten beds normally used for less severe cases were transformed into intensive care rooms, with extra IV machines brought in. Video monitors were set up to enable the staff to keep watch over patients whenever a nurse had to scurry away to care for someone else.

The patch did the job—for the time being, at least.

“We’re kind of like a bathtub that’s filling up with water and the drain is blocked,” the hospital’s chief medical officer, Dr. William Smith, said last week.

Alabama, long one of the unhealthiest and most impoverished states in America, has emerged as one of the nation’s most alarming coronavirus hot spots.

Its hospitals are in crisis as the virus rages out of control in a region with high rates of obesity, high blood pressure and other conditions that can make COVID-19 even more dangerous, where access to health care was limited even before the outbreak, and where public resistance to masks and other precautions is stubborn.

In another sign of how readily the virus can spread, the first reported U.S. case of the COVID-19 variant that’s been seen in the United Kingdom has been discovered in Colorado.

The variant was found in a man in his 20s who is in isolation southeast of Denver and has no travel history, state health officials said Tuesday. Scientists in the U.K. believe the new variant is more contagious than previously identified strains.

In all, the coronavirus has killed more than 335,000 people across the U.S., including over 4,700 in Alabama. Places such as California and Tennessee have also been hit especially hard in recent weeks. 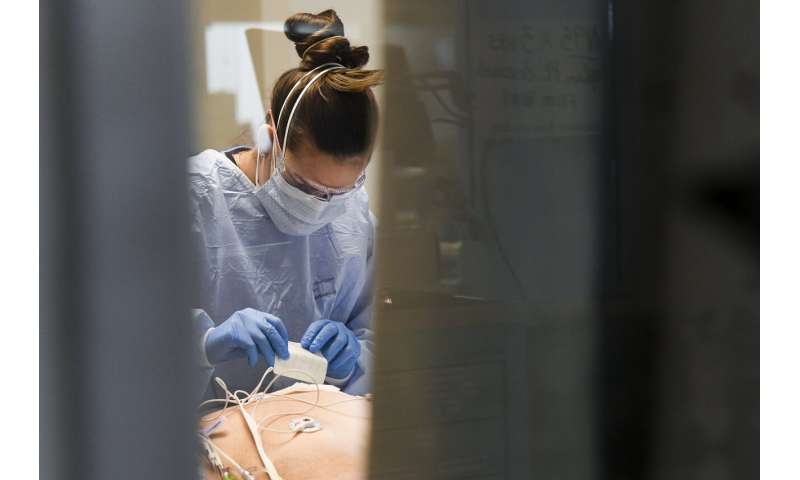 At Cullman Regional, a midsize hospital that serves an agricultural area 55 miles north of Birmingham, the intensive care unit as of last week was at 180% of capacity, the highest in the state. Other hospitals are also struggling to keep up with the crush of people sickened by the virus.

While a typical patient might need ICU treatment for two or three days, Smith said, COVID-19 patients often stay two or three weeks, causing the caseload to build up.

Alabama ranked sixth on the list of states with the most new cases per capita over the past week, according to Johns Hopkins University. Alabama’s latest average positivity rate—the percentage of tests coming back positive for the virus—is almost 40%, one of the highest figures in the country. And the state is seeing an average of 46 deaths per day, up from 30 on Dec. 14.

While ICUs nationwide were at 78% capacity during the week of Dec. 18-24, Alabama’s were 91% full, according to the U.S. Health and Human Services Department. As of last week, 15 Alabama hospitals had intensive care units that were at or above capacity, and the ICUs at six more hospitals were at least 96% full.

On Tuesday, 2,804 people were in Alabama hospitals with COVID-19, the highest total since the pandemic began.

Experts worry the strain will only increase after the holidays because of new infections linked to travel and gatherings of family and friends.

“I think we are in dire shape. I really do,” said Dr. Don Williamson, head of the Alabama Hospital Association. “I fear our Christmas surge is going to be much worse than the Thanksgiving surge.”

Alabama Gov. Kay Ivey, breaking at the time with some of her Southern counterparts, imposed a statewide mask mandate that has been in place since July, but health officials have struggled to get people to comply. The Republican governor also issued a stay-at-home order early in the pandemic but has staunchly opposed doing so again, saying, “You can’t have a life without a livelihood.”

California, in contrast, has issued strict stay-at-home orders in recent weeks in areas where ICU occupancy has reached 85%. 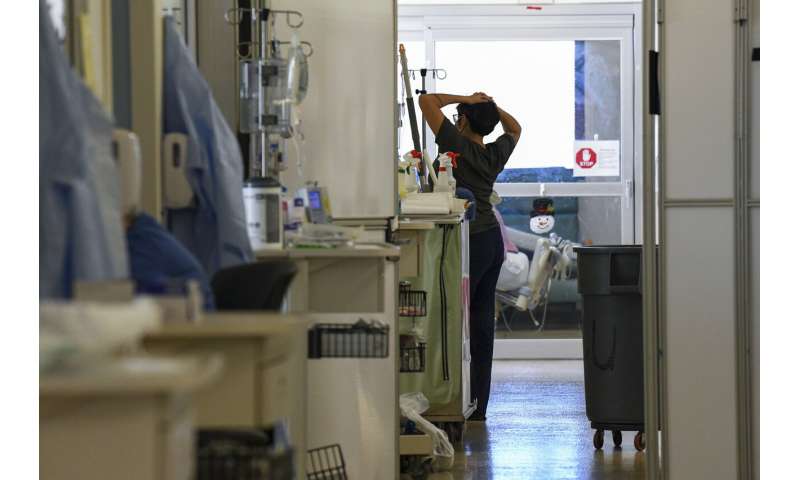 “We have, unfortunately, people who are still getting together in groups, traveling for the holidays, doing things that are unsafe,” said Dr. Scott Harris, Alabama’s state health officer.

The Deep South state has some of the highest rates of certain chronic health conditions that increase the risk of death or serious illness from the coronavirus. Alabama has the sixth-highest rate of adult obesity in the U.S. and ranks third in the percentage of adults who have diabetes.

Alabama is also one of a dozen states that did not expand Medicaid under the Affordable Care Act and thus has large numbers of uninsured. About 15% of people ages 19 to 64 have no coverage, the 13th-highest percentage in the nation, according to the Henry J. Kaiser Family Foundation.

The state has seen the closing of 17 hospitals, mostly small rural ones, in the last decade, a trend that left regional facilities to pick up the slack.

At Decatur Morgan Hospital, COVID-19 deaths have tripled since September and the intensive care unit is full, said Dr. James Boyle. The pulmonologist struggled to maintain his composure, pausing and pursing his lips, as he discussed the possibility of having to ration care in the new year.

“I’ve been practicing in this county since ’98. I’ve never had more than two or three people on ventilators with the flu in the last 20 years,” he said. “We always have a lot of patients in the ICU in the wintertime. To have 16 patients on ventilators with an illness that we don’t usually have is unprecedented.”

UAB Hospital, which is affiliated with the University of Alabama at Birmingham, has brought in retired nurses and dozens of teachers and students from its nursing school to help.

Hospitals in Alabama are getting calls from neighboring states such as Mississippi and Tennessee as doctors seek extra space for COVID-19 patients, but they are not able to help as often as they did in the past. The same is true within the state, with hospitals that might help care for patients after a disaster like a tornado unable to assist right now.

With thousands of people already vaccinated with the first of the two doses needed to guard against COVID-19, the end of the pandemic is in sight. But the toll on medical workers in the meantime is mounting.