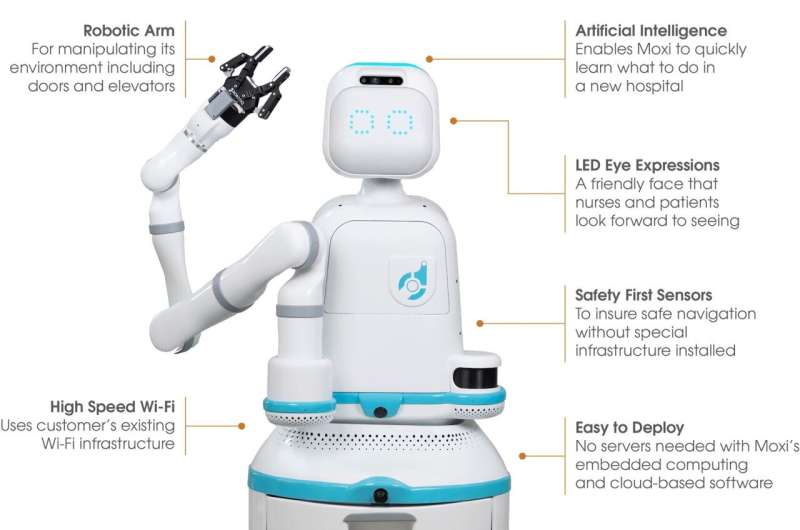 It’s not polite to stare. Especially in the hospital.

But nearly everyone who passes Moxi the robot at Elmhurst Hospital in Elmhurst, Illinois, can’t help but goggle at it, as it slowly rolls through hallways and corridors. The robot is roughly human-shaped, stands about 5 feet tall and, perhaps most strikingly, has big blue eyes, reminiscent of circles on a Lite Brite screen, that occasionally blink.

“That’s technology these days,” said David Crisp, of Westchester, Illinois, laughing, as he waited for an appointment with his mother at the hospital on a recent day. He sat there as the robot rolled up to the infusion center door, delivering medication to a nurse. “These are the times.”

For months, Moxi robots have been roaming the halls of at least three Chicago-area hospitals: Elmhurst, Edward Hospital in Naperville, Illinois, and MacNeal Hospital in Berwyn, Illinois. They deliver medication and shuttle supplies and small pieces of equipment across the facilities. It’s the latest strategy aimed at dealing with a nationwide shortage of nurses and other medical workers that has left many hospitals scrambling for help.

“With the staffing shortage, we’re always looking for ways to take non-clinical tasks away from the clinical staff, especially repetitive tasks,” said Dr. Kimberley Darey, Elmhurst chief medical officer. She noted that Moxi does not work with patients.

The idea behind the robots is to give nurses more time with patients and perform higher level care, rather than asking them to take 10 or 15 minutes to walk an item across the hospital. Many hospitals, including Elmhurst, have pneumatic tube systems for delivering certain items across the hospital, but not all medications and equipment can go through the tubes, either because they’re too bulky or must be handled with care.

That’s where Moxi comes in.

When nurses want to use Moxi, they can summon the robot by entering a request into an app on a tablet, similar to the way a person might request an Uber ride.

When the robot arrives, a nurse or worker then holds their badge up to a detector that sits about bellybutton level on Moxi. That allows the worker to open any of the three drawers on the robot, and the nurse can place medication, supplies or equipment into a drawer. Moxi then scoots away.

When Moxi arrives at its destination, a written message appears on its face screen, momentarily replacing its eyes: “Hello, I’m here for a drop-off.”

A nurse can then flash their badge at Moxi’s detector, prompting the drawer to unlock so the nurse can retrieve the delivery.

Each month, the two Moxi robots at Elmhurst Hospital perform about 1,800 deliveries, said Hiral Patel, innovation program manager at Edward-Elmhurst Health, which merged with NorthShore University HealthSystem in early 2022. The two robots at MacNeal completed more than 4,800 deliveries between August and November, said Jennifer Moore, a nurse manager at MacNeal.

“At MacNeal, we have a lot of people moving supplies and equipment around,” Moore said. “Our nurses are leaving the floor, leaving their patients’ bedsides, to return (telemetry boxes),” she said, referring to devices used to monitor patients’ heart rhythms. “Moxi was a great way to help keep those people in their departments and be able to still move the medications and equipment and supplies from point A to point B.”

Plus, she said, the robots are fun.

“I grew up with ‘The Jetsons’ and Rosey (the robot),” Moore said. “I think it’s really exciting.”

At first, when Moxi arrived at Elmhurst, some of the nurses were nervous, said Heather Johnson, a nurse and clinical leader at the hospital. They worried about what would happen if the robot broke down while trying to deliver medication, or got stuck in a hallway. But after a successful trial run, nurses began to feel more optimistic about the robot’s usefulness.

“If we didn’t have Moxi, then that means nurses are running off the unit themselves,” Johnson said. “As nurses, we want to be by our patients at all times.”

For the most part, the robots now wheel through the hospitals by themselves. They’ve been programmed to know their way around. When the robots first start at hospitals, workers with the company that makes them, Diligent Robotics, accompany the robots throughout the hospitals to help them learn where to go.

Small sensors line the robots’ waists and dot other areas of their bodies, helping them to sense their surroundings and avoid obstacles.

When Moxi needs to get through a closed security door, the robot holds its right wrist up to a detector on the wall, the same way a human might flash their badge. At Elmhurst, workers are still training Moxi on how to use elevators, a skill it’s learned to do at other hospitals. For now, at Elmhurst, Moxi will wait by an elevator, and ask aloud for assistance.

When the robots are between tasks, they head to charging stations at Elmhurst. Otherwise, the robots operate most of the day, seven days a week.

The hospitals don’t own the robots. Rather, they pay Diligent Robotics subscription fees, depending on how much they use them. Patel declined to say how much the robots cost the hospital but said, “It’s cheaper than hiring human help for the same amount of time.”

Diligent Robotics co-founder and CEO Andrea Thomaz also declined to say exactly how much the company charges hospitals for Moxi.

She and her former Ph.D. student Vivian Chu founded the Texas-based company in 2017 and have, so far, deployed dozens of robots to hospitals across the country, Thomaz said.

They developed the robot based partly on research they did, in which they followed nurses and other medical workers through hospitals in Texas. “You would see so much hunting and gathering for stuff and supplies and all the things that we have Moxi robots doing today,” Thomaz said.

They intentionally designed the robots to look a little—but not too much—like humans.

“A big part of what makes someone more comfortable with working closely with a robot is if it has a head and a face and eyes and … can express its intentions,” she said. Moxi, for example, will turn its head slightly to the right if it’s about to turn right down a hallway, and it will tilt its face toward a badge reader on a wall before lifting its wrist to the reader.

But at the same time, Moxi’s creators didn’t want it to look too human. They didn’t want those working with the robot to expect it to have human, adult-level intelligence or to speak a lot.

“We were definitely going for a friendly, socially acceptable” robot, she said.

She said it’s fun to see people’s reactions. “We do hear a lot of people tell us it’s just nice to bring a smile to a stressful environment,” Thomaz said.

At Elmhurst Hospital, patients often grin as Moxi rolls by. Some stop to take selfies with it.

“It’s absolutely adorable,” said Alex Lugo, of McKinley Park, while waiting for an appointment on a recent day. “So cute.”

Pam Altman, of Villa Park, said she first noticed Moxi months ago, when her husband was in the hospital.

“I was like, ‘What the heck was that?'” Altman said of her first reaction.

“These nurses are really busy, so it frees up time,” she said.