Deaths spiked in the midst of England’s summer heatwave which saw the country bask in heat usually seen in Florida, official figures show.

Data from the Office for National Statistics reveals 382 more people died than average between June 26 and June 30 in the country this year.

Another two day period in April, when temperatures reached 29.1C (84F) in the capital – well above usual for the month, also saw 243 more deaths than average.

An expert has warned British buildings are not well prepared enough to cope with hot weathers and may have contributed to the deaths of vulnerable people.

Summer 2018 saw the UK’s longest heatwave since 1976 and the driest season in 225 years, prompting regular heat warnings from the Met Office. 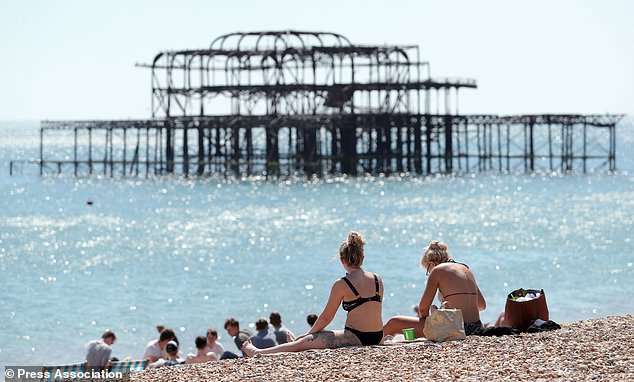 Figures released by the Office for National Statistics (ONS) revealed the number of deaths recorded between April and June in England.

Although there were fewer deaths than the five-year average for the entire period, mortalities suddenly spiked toward the end of June.

And from those two days, temperatures in England exceeded 24.5C (76F) – the level at which PHE warns of a risk of heat-related deaths – until the end of the month.

Official statisticians hesitated to blame the heatwave for the deaths, but one expert said many could have been partly due to ‘overheating’.

Bob Ward, of the Grantham Research Institute on Climate Change and Environment at London School of Economics said: ‘It is likely that many of the people who died during the hot weather suffered from underlying illnesses, such as respiratory disease.

‘Nonetheless, many of these deaths may have been prevented if buildings were better adapted to prevent overheating.

‘The Government has been warned by experts for a number of years that the awareness of the public needed to be raised about the increasing risks of heatwaves due to climate change.

‘This summer was the warmest on record in England, and analysis by the Met Office shows that the incidence of heatwave conditions is rising.’ 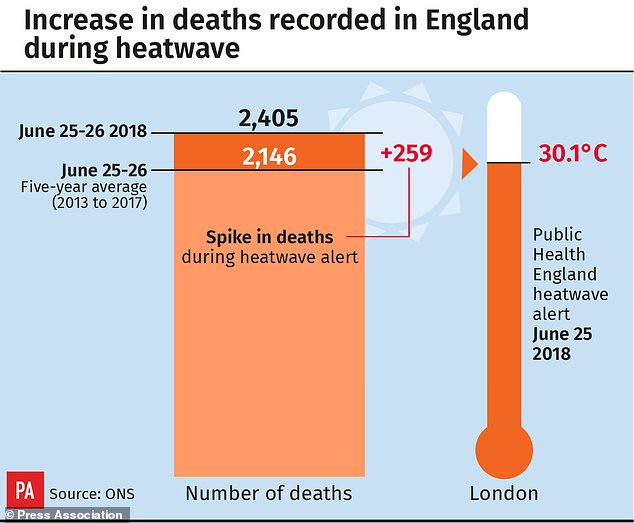 During a two-day period in June at the height of summer, the number of people who died rose by 259 above the five-year average, a spike which coincided with temperatures pushing past a scorching 30C (86F) in London

The spike in deaths at the end of June followed a short period of the month in which deaths were actually lower than average – between June 21 and 22.

A peak and fall in the number of deaths was also recorded in April, the ONS figures show, coinciding with another spell of hot weather.

There were 243 more deaths in England between April 18 and 19 than the five-year average across the same period, but 378 fewer between April 21 and 23.

Annie Campbell, an ONS statistician said: ‘Although the provisional data currently available appears to show a high number of deaths at the end of June, we can’t confirm the heatwave is the cause.

‘The question of deaths which might be attributable to a heatwave will be addressed in our next quarterly release, due to be published later this year.’