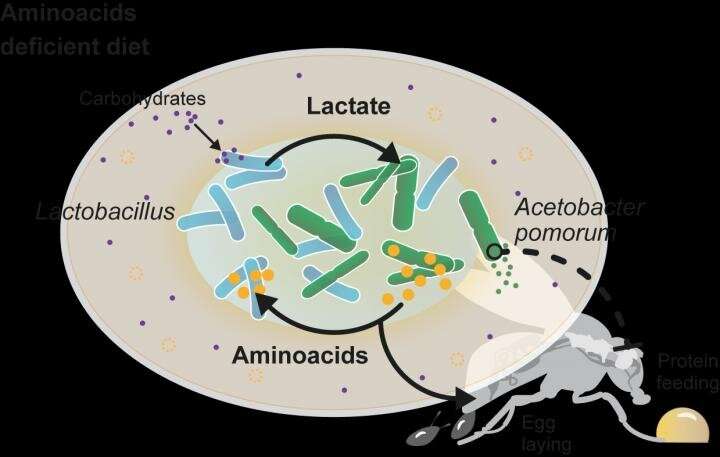 To study how the microbiome affects their host behavior, a group of researchers at the Champalimaud Center for the Unknown, in Lisbon-Portugal, used the fruit fly combined with high-tech tools to show that two gut bacteria establish a metabolic cross-feeding that enables them to grow in diets that lack the nutrients that are essential for their growth and to allow them to change host decision making and reproduction. Results reveal a mechanism through which the right combination of bacteria can lead to microbiome resiliency to dietary perturbations and changes in brain function.

A balanced intake of essential amino acids is crucial to ensure the well-being and health of all animals. The essential amino acids are the building blocks of proteins but they also influence how much offspring animals produce, and what animals decide to eat. Intriguingly, researchers at the Champalimaud Center for the Unknown had previously shown that the microbiome plays an important role in dictating how amino acids affect the brain. What was most puzzling was that bacteria could only affect the decisions of the animal when they were present in specific combinations. It is widely known that the microbiome often contains many different species of bacteria but why different types of bacteria are needed to influence brain function and alter host physiology remains a mystery.

This is the puzzle Carlos Ribeiro and his team at the Champalimaud Center for the Unknown set out to tackle: “To study how bacteria affect their host physiology is a daunting task in organisms with very complex microbiomes. This is where the fly and its less complex microbiome emerges as a powerful tool. It allows us to precisely dissect the mechanisms used by the microbiota to change the host’s feeding decisions,” says Sílvia Henriques, post-doctoral researcher and author of this study published today (August 25th) in the journal Nature Communications.

Researchers led by Carlos Ribeiro, principal investigator and senior author of this study, previously found that flies deprived of single essential amino acids develop a strong appetite for protein-rich foods. However, in flies that were associated with two bacteria that are very abundant in the microbiome (Acetobacter pomorum and Lactobacillus plantarum) their preference for protein was drastically reduced and they prefered to eat sugar. “Interestingly, the association of flies with any of these bacteria alone could not reduce yeast appetite. Thus, in this new study, our main focus was to understand why these two particular bacteria need to be present to change the feeding behavior of the fly,” says Ribeiro.

Work from several groups studying the microbiome, including the Ribeiro Lab, has shown that it is typically necessary for a community of bacteria, rather than isolated bacteria, to produce an effect on the host behavior—and this was most likely due to specific substances bacteria produce, so-called metabolites. Therefore, the team set out to measure the metabolic interactions established between the bacteria within the microbiome and to map how specific bacteria and their metabolites affect the animal.

To tackle these, the authors ran a series of elegant experiments. To follow the feeding choices of the flies, the researchers took advantage of a sensor developed in the lab—the flyPAD—and used it to measure with great detail the feeding pattern of individual flies. Then they used bacterial mutants to understand the impact of specific functions of the bacterial cells in the behavior of the host. And with collaborators at the University of Glasgow, they also used a sophisticated technique called isotope-resolved metabolomics that enabled them to track the metabolites that were exchanged between the two different bacteria.

“We found that the two bacteria exchange metabolites, and that this cross-feeding (syntrophy) enables them to grow and act on the animal even if diets lack the nutrients that are essential for them. Specifically, we now understand that Lactobacillus strains produce lactate, which is used by the Acetobacter strains to synthesize amino acids and other metabolites. These are then used by the Lactobacillus strain which cannot synthesize them to continue to produce lactate. Furthermore, these bacterial amino acids are very likely used by the animal for egg production. But most importantly, we now understand that the lactate is also used by the Acetobacter bacteria to change the behavior of the fly,” explains Darshan Dhakan, post-doctoral researcher and author of this study.

By establishing this cross-feeding relation, the bacterial community becomes resilient to drastic dietary changes enabling their growth in the intestines of animals that ingest diets that lack nutrients that are essential to their survival. Ribeiro adds, “It is well-established that our diet affects both the microbiome and our brain. What makes it complicated is the microbiome then in turn affects how diet affects us, and what animals decide to eat. This makes it a very complex puzzle to solve. But by combining the right technologies with the right experimental system we can get at the heart of the mechanisms by which the microbiome interacts with our diet to affect our brain and our body. Importantly, we show that the right associations of bacteria can make the microbiome resilient to dietary perturbations, explaining why some animals and people might be more sensitive to the nutrient content of food than others. It is also a beautiful example of how nature establishes circular economies where nothing gets wasted and everybody gains.”