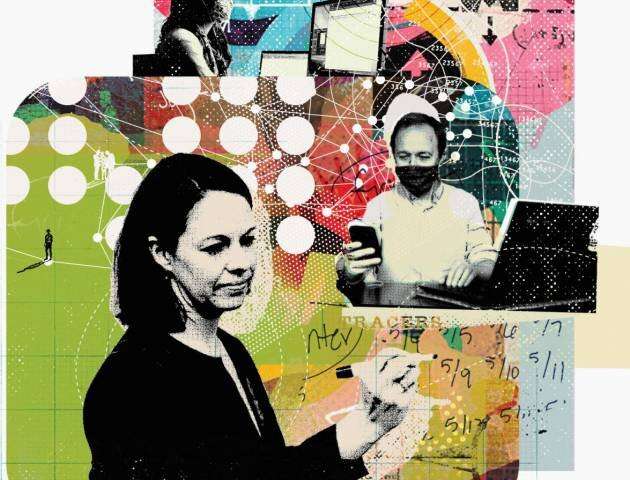 In May, the patient had hosted a party for a dozen friends in Salt Lake City, fallen sick, and tested positive for SARS-CoV-2.

The next day, Salt Lake County contact tracer MacKenzie Bray, MPH ’19, asked the patient for names and phone numbers of all the guests. The patient told Bray: “If I’d known I was contagious, I’d never have been around other people.” It’s something she hears often.

Bray notified the guests. One had quickly gotten a test, and it was negative. He declined to quarantine, but Bray kept calling. Then the man got sick. This time, he tested positive, and so did his family, though only he had symptoms. “If people test too soon and are negative, they think they’re fine,” says Bray.

On average, one person with the novel coronavirus infects two or three other people. If a person passes the virus to three others and that same reproduction rate continues, 10 generations of infection could lead to more than 88,000 infections in fewer than two months.

Social distancing had slowed the spread of the virus in Bray’s county in May, however; at that point, people with the virus were likely infecting one or two others. Assuming a reproduction number of 1.5, the party guest’s hypothetical family of four could have infected more than 600 people by July. Even if the case-fatality rate was just 1%, six of those people might have died.

Contact tracing is one of the few available strategies we have to stop the chains of coronavirus transmission, and ultimately reduce the number of cases and deaths,” says epidemiologist Kelly Henning, who leads the public health program at Bloomberg Philanthropies. “It will also allow us to continue to slow the spread of the virus while safely reopening the economy, and keeping it open.”

It’s a simple but difficult process. After calling patients who have recently tested positive and asking them to stay home and isolated from others in the household until they recover, contact tracers then call their recent close contacts and urge them to quarantine themselves for 14 days. Health departments in the U.S. have used this strategy since the early 20th century—originally for tuberculosis and syphilis. Globally, it contributed to the smallpox eradication effort in the 1960s and ’70s, has helped South Africa control tuberculosis since the 1990s, and played a role in ending West Africa’s 2014 Ebola outbreak.

Before COVID-19 arrived, the U.S. had only about 2,000 credentialed contact tracers, mostly for sexually transmitted diseases. In a national plan published on April 10, the Bloomberg School’s Center for Health Security called on health departments nationwide to hire an “army” of 100,000 contact tracers.

Their work will be crucial as people return to work, schools, restaurants, hair salons, and gyms. “In theory, if we are able to find the vast majority of cases, trace their contacts, and ask them to quarantine at home, that will limit the amount of surge that we experience,” says epidemiologist Crystal Watson, DrPH ’17, MPH ’09, lead author of the Center’s plan.

Watson and colleagues recommend that Congress provide $3.6 billion to help state and local health departments hire those 100,000 contact tracers for a year at $17 per hour. In comparison, Congress passed four bills by mid-May that, together, allocate $3 trillion to businesses, individuals, and government programs.

Other countries have already used contact tracing successfully against COVID-19. South Korea is one of several nations that have controlled the virus without extended lockdowns by using widespread testing and contact tracing. When the virus flared there in early May after nightclubs reopened, South Koreans traced thousands of contacts, says Watson. “They had the capacity. That’s what I want to have for the U.S.,” she says.

These new hires would learn the basics from an online course developed by Bloomberg School epidemiologist Emily Gurley, Ph.D. ’12, MPH, and several colleagues. In designing COVID-19 Contact Tracing, Gurley drew on her 15 years’ experience using contact tracing against everything from acute hepatitis to Nipah virus, mainly in Bangladesh. Gurley’s team designed the five-hour course to be understandable to anyone with a high school diploma. Lectures teach SARS-CoV-2 basics, explain how to trace contacts, and address ethical considerations. A segment on interviewing cases and contacts includes a video of mock phone calls with two actors: an elderly, coughing patient, and a woman who’d sat near him at choir practice.

When it went live on May 11, the course caught fire. Within three weeks, 345,000 students enrolled, and 35 million people viewed the Coursera landing page. Of the first 40,000 applicants for the New York jobs, 5,000 had completed the course before applying.

Emails poured into Gurley’s inbox. The media asked for interviews nonstop. Some people wrote to tout their contact tracing apps, while others let Gurley know they were translating the course into Portuguese, Spanish, Nepali, Arabic, and Ukrainian. A public health official in Louisiana wanted everyone in her parish to take the course so they would understand contact tracing’s power and be more likely to cooperate.

By early May, NPR reported that 44 states and the District of Columbia expected to hire a total of 66,000 new contact tracers. When Massachusetts posted 1,000 contact tracing jobs, 15,000 people applied. “I do think there’s a real sense of ‘how can I help?’ People feel that they want to be part of something; they want to be part of reopening our communities,” says Adriane Casalotti of the National Association of County and City Health Officials.

Contact tracing requires more than knowing the coronavirus’s natural history and details about transmission. “There are a lot of interpersonal skills that are important to make it through those interviews,” says Tyler Shelby, a contact tracing supervisor in New Haven, Connecticut. When calling an index patient, “you’re not really sure what you’re getting into until you’re on the phone. Some of these individuals are very sick.”

Initial calls to patients last from 30 to 40 minutes, says Shelby, an MD/Ph.D. student at Yale School of Medicine who oversees 170 volunteer tracers (all graduate students in health-related programs at Yale).

The calls often require persistence and people skills. Utah contact tracer Bray (whose account has been altered to protect anonymity) said patients and contacts are often worried about scams and can be reluctant to answer calls. Some have told Bray they can’t stay home because they lack sick pay or fear losing their jobs if they call in sick. She also sometimes worries that patients haven’t told her the truth—for instance, when a person says she’s quarantined but Bray hears children playing nearby. “You’re not responsible for your patients’ actions,” she says. “But it still weighs on you.”

It’s not easy work, concedes former CDC director Frieden. “You have to really explain to people that they may be spreading [the virus] without knowing it. You have to put it in personal terms: ‘This could be your neighbor’s kid with leukemia who dies, or your coworker’s wife who has breast cancer,'” he says. “This really is about people’s lives.”

He also suggests that health departments make sure that people entering isolation or quarantine have what they need, such as medical care, medications, groceries, and supplies like masks and trash bags. Best practices, Frieden says, include stipends to replace lost income. “If people who are infected, and their contacts, are safer and stay isolated, we will all be safer,” Frieden says.

As states, cities, and towns experiment with ways to live with the virus in our midst, says Watson, “investing in contact tracing can prevent communities from yo-yoing between controlling the virus and having it spread unchecked.”

Contact tracing, she says, can reduce suffering and death while we wait for a vaccine.

Here’s how contact tracers work to break chains of transmission: