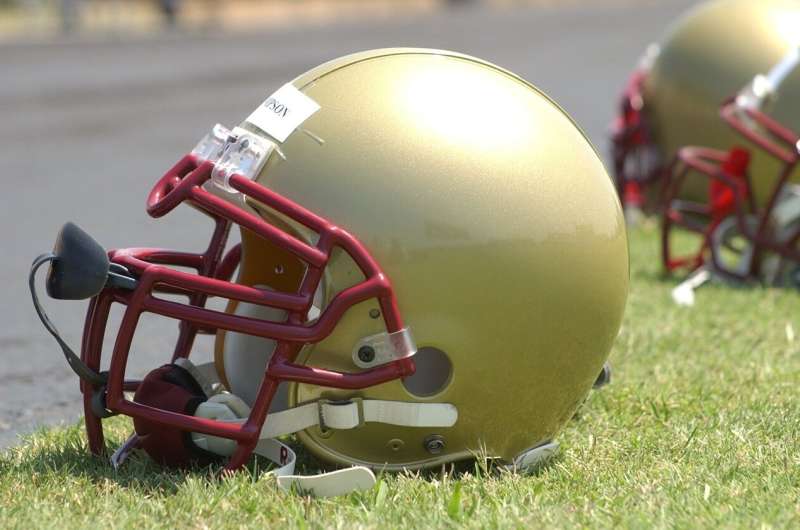 The pouring rain and blustery wind gusts are brutal. The crowd is bone-chillingly cold, but they don’t care.

Their favorite football team is on the field.

Suddenly, a player turns up the tempo, plowing full force into the opponent. Cheers erupt in the stands.

The player jumps up, shakes off the hit, ready for the next play. But he’s suffered a sub-concussion—a critical component of chronic traumatic encephalopathy (CTE), a traumatic brain injury that often goes unnoticed during play.

The head impacts he experiences are causing sub-clinical brain damage. Experts refer to these sort of impacts as a sub-concussion—a traumatic brain injury that does not present with the signs and symptoms of concussion. Sub-concussions often go unnoticed during play, but have been shown to play a critical role in the risk for developing CTE.

This unsettling scenario plays out frequently on football fields, basketball courts, and other sports venues. The Centers for Disease Control and Prevention estimates between 1.6 and 3.8 million sports- and recreation-related concussions occur each year in the United States. While the prevalence of sub-concussive injuries is not well-quantified because of the nature of the injury, the occurrence is likely exponentially greater.

To address this, Virginia Tech researchers in the College of Agriculture and Life Sciences are studying how docosahexaenoic acid (DHA), a type of omega-3 fatty acid, usually inadequate in collegiate athletes’ diets, helps protect the brain from trauma in a proof-of-concept study.

“This would be such an important finding if a nutrition or dietary supplement intervention can make a difference in athletes’ risk of brain injury,” said Michelle Rockwell ’97, ’99, and ’19, an adjunct faculty member in the Department of Human Nutrition, Foods, and Exercise and the principal investigator of the research project.

The research funding was originally awarded to Texas Christian University, but Virginia Tech’s College of Agriculture and Life Sciences was awarded the final two years of the three-year, $1.13 million grant from DSM Nutritional Products and will combine findings from both sites.

The research team selected football because of the repetitive head impacts, which have been shown to exceed 500 per college season and 5,000 in an NFL career. Ultimately, they chose linemen as the study group. The research was conducted from June through December 2020, covering football’s summer camp and the entire football season.

“This is the first time that a randomized, controlled DHA supplement trial with in-depth measures of head impact and brain damage has been conducted in football players,” said Rockwell, also a senior research assistant with the Department of Family and Community Medicine at Carilion Clinic and an assistant professor with the Virginia Tech Carilion School of Medicine. “DHA has shown to be effective in reducing traumatic brain injury in mice, but we don’t watch mice play on Sunday afternoons.”

The ultimate goal of the research is to identify dietary or supplement strategies that athletes or teams could implement to protect the brains of their athletes as one of many measures put in place to protect their health.

Picking up during the research right where the TCU researchers left off in 2020, the Virginia Tech researchers studied Hokie football offensive and linemen for an entire season. Approximately half of the linemen received daily DHA supplementation and the remaining participants received a matched placebo, with the research conducted in a double-blind scenario.

The dose of DHA, commonly found in foods such as fatty fish and other seafood, given to the athletes daily was in the ballpark of two grams—a hefty amount but understandable given the average body weight for the participants was more than 250 pounds.

Before the players took the field, functional magnetic resonance images were conducted in Stephen LaConte’s lab, a faculty member in the Fralin Biomedical Research Institute, to evaluate both the structure and function of the brain in conjunction with collaborators at Harvard University and the University of Munich. These scans were repeated part-way through the season and again after the football season. Ben Corl, an associate professor in the Department of Dairy Science was also a collaborator. Corl’s lab worked with the researchers to analyze blood fatty acids.

Donning GPS trackers embedded in their helmets, the players had a plethora of motions analyzed, including gravitational forces of impacts, the maximal force, and rotational forces. Each of these impacts could contribute to microdamage to the brain. Biomarkers in the bloodstream have been shown to reflect this brain damage in previous studies. Researchers measured the following biomarkers in this study: neurofilament light (Nf-L), total tau, glial fibrillary acidic protein (GFAP), and ubiquitin carboxyl-terminal hydrolase L1 (UCH-L1). A series of neurocognitive tests were also administered to evaluate functional changes associated with the season and supplements.

From master’s committee to research

To help keep the data collection team small during the COVID-19 pandemic, just a handful of students assisted with the research, providing support for the main research team, monitoring supplement compliance, processing samples, administering tests, and managing data. In total, three graduate students and five undergraduate students were involved with the project in 2020 and seven students are involved in the data analysis phase of the project.

Peter Ritz ’19, from Plano, Texas, is one of those students. He first met Rockwell as a sports dietitian graduate assistant at Virginia Tech in 2017 and worked full time overseeing the nutrition programs for the football, women’s lacrosse, and tennis teams while also completing his master’s in applied nutrition and physical activity through Online Master of Agricultural and Life Sciences Program in the College of Agriculture and Life Sciences. Ritz was the first graduate of the Applied Nutrition and Physical Activity concentration.

The relationship began with Ritz asking if Rockwell would serve as his master’s committee advisor because of her background in sports nutrition.

“I was interested in omega-3 fats, like fish oil, because I read some research connecting it to brain health and was surprised that the NCAA supplement rules at the time didn’t allow schools to provide it to athletes,” Ritz said. “My initial proposal was to survey and take blood samples from 50 of my athletes at Virginia Tech to learn more about their overall omega-3 status.”

Ultimately, Ritz received funding from the Collegiate and Professional Sports Dietitians Association and his project ended up involving 1,500 athletes across eight other Power 5 schools across the country. This project, published in PLoS One in 2020, helped demonstrate that athletes weren’t getting adequate levels of omega-3 in their diets, and, ultimately, the NCAA changed the rules around omega-3 supplements during the research process.

“I volunteered to help with this project after completing my master’s as a side gig because I am passionate about sports science research and see how important it could be for the long-term health and well-being of thousands of athletes,” Ritz said. “One of the things I appreciate most about Michelle is that she treats everyone regardless of education level as an equal member of the research team. She truly believes in every student that she comes in contact with and wants to see them succeed.”

Ritz initially helped to set up the project within the Virginia Tech athletic department, getting approval from coaches, administration, and sports medicine staff. More recently, he shifted his efforts to data analysis and helping Rockwell plan and write publications on the results.

“Essentially what began as asking Michelle to be one of my master’s committee members turned into the most impactful professional relationship I have,” said Ritz, now a football sports dietician at Northwestern University.

The research is in the final phase: the analysis of results. And so far, Rockwell said, these results are promising. For example, some biomarker concentrations and neurocognitive measures were better in the participants who took DHA supplements compared with those who took a placebo.

“Sometimes we make recommendations to athletes about nutritional supplements that are in the category of ‘probably helpful’ and unlikely to be harmful. Our current evidence certainly points in this direction,” Rockwell said.

The important next steps for the research involve the full analysis of the results, including MRI findings, which are expected in the next month. The research team will then submit results to peer-reviewed journals while designing future work to repeat the study over a much larger group of athletes to confirm the findings.