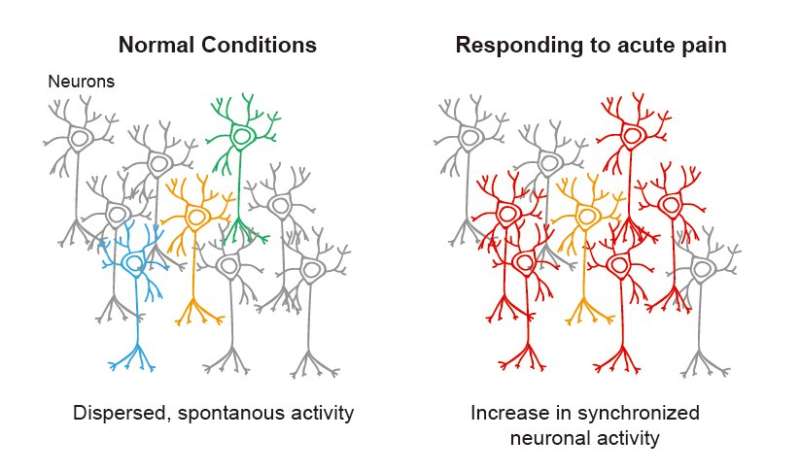 In a world first, a cross-institutional research collaboration has used a two-photon microscope with a combination of calcium imaging and holographic stimulation to reveal that the functional connectivity between neurons located in the primary somatosensory cortex is increased in response to acute pain.

Pain occurs as a result of injury, such as peripheral neuron damage or inflammation stemming from peripheral tissue violation. Research findings have been published on the involvement of central nervous system abnormalities in the onset of pain and sustained pain. The primary somatosensory cortex in the cerebral cortex plays an important role in identifying the strength and location of pain. Research carried out using fMRI and two-photon microscopy has shown that activity in this part of the brain is accelerated when acute pain is experienced. However, it has yet to be revealed how the functional connectivity and synchronization between neurons changes over time, and what kind of effect these alterations have on pain.

The researchers conducted experiments using inflammatory pain model mice and the results revealed that both the spontaneous activity of the neuronal population and the synchronized activity between neurons in the primary somatosensory cortex increased during acute pain. Furthermore, they discovered that when a single neuron was stimulated with holographic light, there was an increased response from the surrounding neurons. As the pain was ameliorated, the neurons gradually returned to their original state. The researchers also showed that expression levels in N-type calcium ion channels are involved in this mechanism, revealing that the pain threshold could be restored when inhibitors that blocked these channels were administered. It is hoped that these discoveries can contribute towards treatments for patients with chronic pain.

These research findings will be published in Science Advances on March 19, 2021.

Pain occurs as a result of injury, such as peripheral neuron damage or inflammation stemming from peripheral tissue violation. It is an unavoidable sensation that everyone has experienced, but the detailed mechanism for the onset and sustention of pain has yet to be illuminated. Vital research into pain has been conducted that focuses on the activation of neurons and glial cells in the dorsal horn of the spinal cord. With the development of imaging technologies, there has been increased research into the relationship between pain and regions of the brain in recent years. 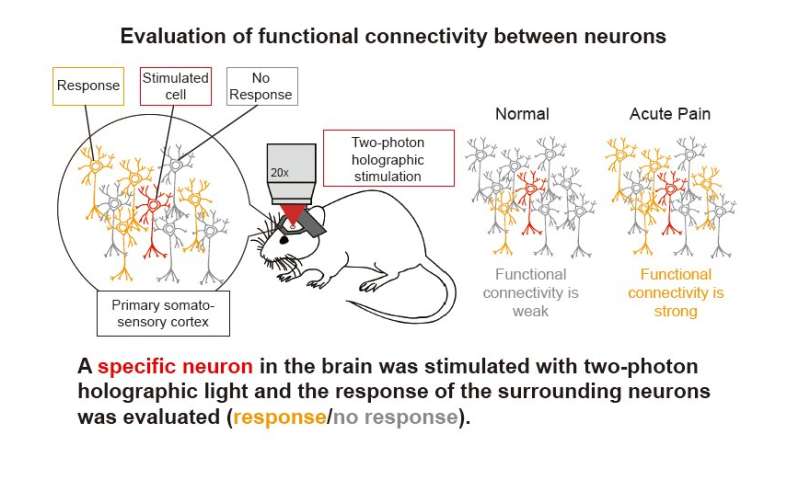 The cerebral cortex’s primary somatosensory cortex (S1) is an area of the brain that plays in important role in distinguishing pain. Research conducted using imaging technologies such as fMRI and two-photon microscopy have shown that the neuronal population in S1 is aggravated during acute pain; however the detailed, underlying neural networks in S1 that are involved in generating and sustaining pain have not been clarified.

The research team used a two-photon microscope to conduct calcium imaging to track identified neurons, illuminating increases in both spontaneous neuronal activity and synchronization between S1 neurons during acute pain. Furthermore, they revealed that when a single neuron was stimulated with holographic light, there was an increased response from the surrounding neurons and as the pain was ameliorated, the neurons gradually returned to their original state. In addition, the expression of N-Type calcium ion channels was found to play a role in this mechanism, and the researchers showed that when this expression was corrected, the pain threshold could be effectively restored.

The researchers conducted calcium imaging using a two-photon microscope. This method enabled them to monitor the activity of neurons in a living brain. Inflammatory pain model mice were developed by injecting Complete Freund’s Adjuvant (CFA) into the hind paws. During acute pain, the spontaneous activity of neurons in the 2/3 layer of S1 increases, as does the synchronization between neurons. The research group also showed that the neurons returned to their original state once pain was ameliorated. Moreover, they discovered that the higher the level of synchronization between neurons, the lower the pain threshold.

To verify the above results, an experiment was conducted using a combination of two-photon microscope calcium imaging and holographic stimulation. It was discovered that when a single S1 neuron in an inflammatory pain model mouse was stimulated, the response from the surrounding neurons increased during acute pain. Conversely, when pain was ameliorated, the response from the surrounding neurons decreased. In summary, it was shown that synchronization between neurons increased as a result of strengthened functional connectivity between neurons in S1 during acute pain, and that when this pain was ameliorated, this synchronization decreased.

Flow cytometry was used to investigate the molecular mechanism relating to these results. The expression levels of each ion channel in the S1 neurons of inflammatory pain model mice that had experienced acute pain were compared with those of wild-type mice that had not been exposed to pain. The results showed that in the inflammatory pain model mice, there was increased expression in the N-type calcium channels, and that by administering calcium channel inhibitors (either as an intraventricular injection, or as an ointment on the surface of S1), the pain threshold could be restored.

The primary somatosensory cortex (S1) is an area of the brain that plays in important role in distinguishing pain, and research up until now has shown that neuronal population activity in S1 is accelerated when acute pain is induced. The current research study revealed that not only was this activity accelerated in response to acute pain but that there is also an increase in functional connectivity and synchronized activity between the neurons.