Non-smokers that take up vaping are at risk of developing inflammation that is linked to cancer, a new study has revealed.

The changes were evident in vapers who heavily use the devices.

More than 1,300 people have developed lung damage from vaping that US officials are now calling EVALI. Nearly 30 have died.

Despite the widespread illnesses and deaths, scientists still know little about what e-cigarettes do to the human body in the short- or long-term, including how they are making Americans deathly ill.

The latest research, from Ohio State University (OSU), found that despite claims vaping is ‘safer,’ using the devices causes the same kind of inflammatory cell changes linked to lung cancer as traditional smoking – and the changes start within a month. 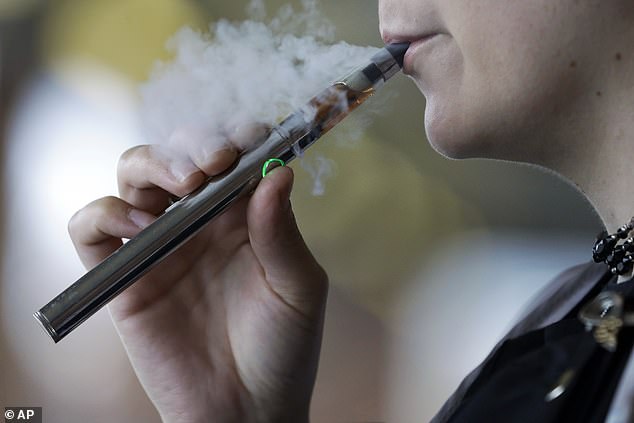 After just a month of using e-cigarettes – whether or not they contained nicotine or flavoring – non-smokers who became heavy users developed lung inflammation linked to cancer risks in smokers, according to a first-of-its-kind Ohio State University study

After just four weeks of using e-cigarettes, the 30 non-smokers who volunteered for the new study were already undergoing physical changes at the cellular level.

And it didn’t matter if the devices contained nicotine or not, or whether or not they were formulated with additional flavors.

The effects were small, but consistent.

When small samples of lung tissue and fluid from the volunteers who were instructed to take up vaping were compared to another 30 control participants who had never smoked or vaped, the researchers didn’t see any differences in inflammation.

But when they focused on people in the vaping group that had take longer, deeper inhales of the e-cigarettes, they found increased inflammation.

‘The implication of this study is that longer term use, increased daily use and the addition of flavors and nicotine may promote additional inflammation,’ said Dr Peter Shields, the study’s senior author and deputy director of OSU’s Comprehensive Cancer Center.

Since the spate of EVALI started sweeping the US earlier this year, scientists have been frantically searching for an explanation for vaping’s harmful effects.

Some have zeroed in on the flavoring added to some e-cigarettes.

Another recent study suggested that it wasn’t oil but toxic fumes that appeared to be marring lung tissue in so many people.

And the CDC’s latest focus has been on often-adulterated THC e-cigarettes.

But because the new study tested e-cigs with and without nicotine and with and without flavoring, and saw the same effects of short-term use, the authors are pointing their fingers at another ingredient: glycerine.

Though few published studies have focused on glycerine, a number of experts have been suspicious of the ingredient.

Glycerine is approved and considered ‘generally safe’ to use in food and cosmetics by the FDA.

But prior to the rise of e-cigarettes in the past decade, the substance had never been heated and inhaled.

So scientists simply don’t know what this new way of ingesting the oil-derive substance might do to us.

‘The general perception among the public is that e-cigs are ‘safer’ than cigarettes,’ said Dr Shields.

‘The reality is the industry is changing so fast – and with minimal regulation – that usage is outpacing the rate of our scientific understanding.

‘It’s becoming a public health crisis we should all take very seriously from a general pulmonary health, cancer risk and addiction perspective. E-cigs may be safer than smoking, but that is not the same as safe, and we need to know how unsafe they are.’