If breaking news feels like it’s beginning to break you, you may be experiencing headline stress disorder. Here’s how to cope. 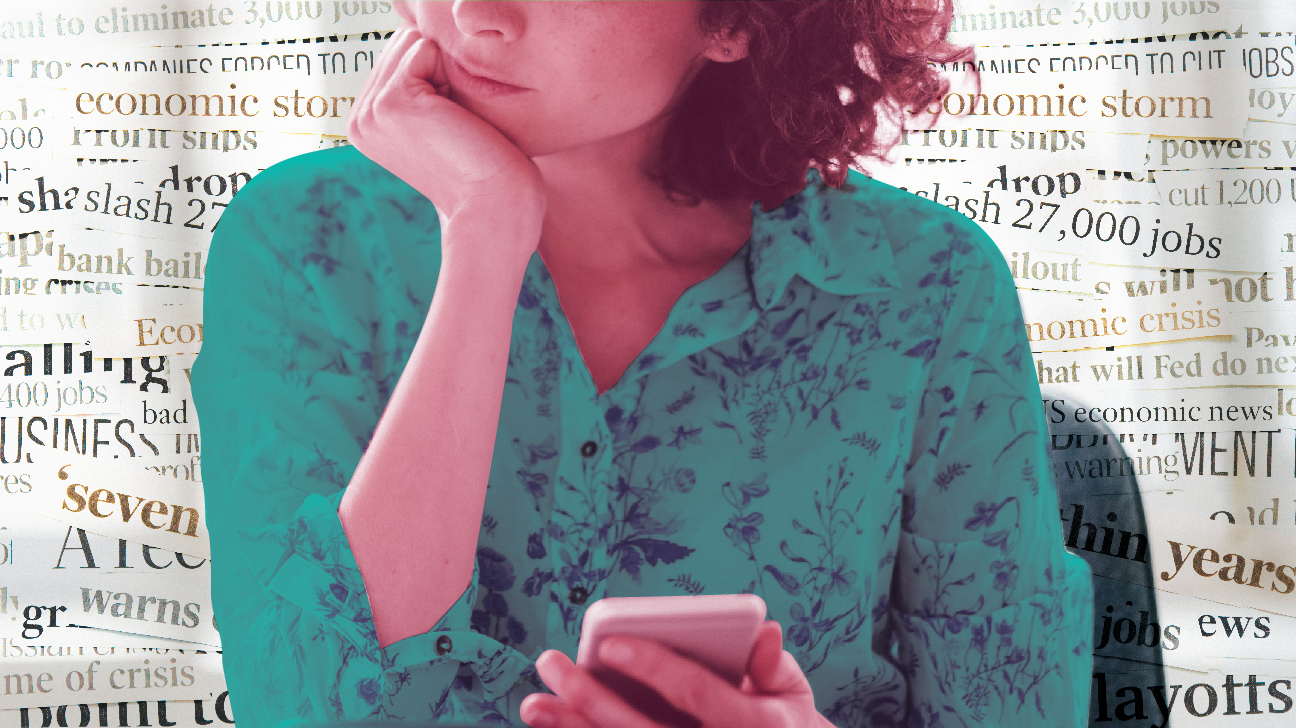 Like many of her friends, Charlene Jaszewski, a freelance editor living in Portland, Oregon, grabs her phone the minute she wakes up to see “what fresh hell happened” overnight.

One morning, the self-professed “digital nomad” was on her way to a coffee shop to do some work when she had what she calls “a little breakdown” in her car. She had been arguing politics that morning with people she (strongly) disagreed with, and suddenly started crying.

“I felt angry and helpless at the same time,” she recalled, though she wasn’t sure exactly why she was being so affected.

Glenn Garber, a retired city planner living in a small town outside Boston, says he quickly turns on CNN or MSNBC or NPR when he wakes up in the morning.

“Even though I know there’s going to be news that make me crazy, I can’t seem to break the habit,” he explained. “It’s a low-grade nervousness that affects me every waking hour, and I know so many people who feel the same way.”

At night, Garber says he shifts focus from the “daily outrage to the long-term worry.” That’s when he broods.

The things Jaszewski and Garber are describing aren’t unique, they are symptoms of headline stress disorder — and it affects millions of people around the world.

Headline stress disorder is not something you’ll find in the DSM-5 (Diagnostic and Statistical Manual of Mental Disorders) alongside schizophrenia and bipolar disorder. The term was coined by Steven Stosny, PhD, a couples’ therapist in Maryland, who first wrote of election stress disorder.

“I predicted that it would be done by December 2016,” Stosny said with a chuckle, “But election stress immediately morphed into headline stress.”

“The effect is an increase in general anxiety, worry, intolerance, and lowered frustration activation,” Stosny explained.

It affects people across the political spectrum

While headline stress disorder may sound like a euphemism for "I don’t like the current president and his policies,” a version of it does cross the aisles.

According to a Pew Research Center survey released in early June, close to 7 in 10 Americans said they felt “worn out by the amount of news” that’s available.

Republicans and right-leaning Americans, in fact, reported feeling being overwhelmed by news: three quarters of Republicans versus 6 in 10 Democrats.

Since 2006, the American Psychological Association (APA) has regularly surveyed Americans on stress, generally finding that money, work, and the economy were “very” or “somewhat significant” sources of stress. For the first 10 years, the surveys found stress levels were decreasing, according to “Stress in America: Coping With Change.” But in the latter half of 2016 and in early 2017, that trend began to change direction.

In August, the APA commissioned a Harris Poll survey on the election. The following January, the organization added a second survey with questions on the future of the United States, the political climate, and the outcome of the election.

Stress levels had risen. More than half of Americans reported that the current political climate is a “very” or “somewhat significant” source of stress. Two-thirds checked those boxes indicating concern for the “future of our nation,” and 49% checked them for stress over the election’s outcome. An additional study conducted later in 2017 — “Stress in America: The State of Our Nation” — showed 59% of responders saying that the United States was at “the lowest point in our nation’s history,” and 72% said the media “blows things out of proportion.”

“The whole country is intolerant of disagreements,” says Stosny.

It can strain relationships

“I’ve never seen so much anger,” said Elaine Ducharme, PhD, a clinical psychologist based in Glastonbury, Connecticut. “In family therapy, people are literally screaming at each other and refusing to listen; nobody digests what the other says.”

Just as it’s not in the DSM, headline stress disorder is generally not a condition for which patients, or clients, enter therapy. However, once they’re there, it has been emerging as a source of insomnia, lack of energy, anger, irritability, as well as the precipitant to fights with families and co- workers.

She says when patients come to her describing these symptoms and they begin to try to identify the cause, some might say something like, ‘Well, actually, my spouse thinks it’s because I stay up too late, watching CNN and MSNBC.”

She says people in her practice have talked about dreading going to family events, explaining to her, “Uncle so-and-so will be there, and I know we don’t agree.”

“Everything we see is so provocative,” Ducharme said. “It leaves people feeling very anxious. With other kinds of anxiety, say, a fear of flying, we’d say, ‘we want you to fly’ [to treat it]. That doesn’t work with this.”

It can also affect your mental health

Mary McNaughton-Cassill, PhD, a psychology professor at the University of Texas at San Antonio who’s studied the effects of the media on people’s mental health after such events as 9/11 and major hurricanes, said, “The human brain is not made to process as much information as we’re getting now. We like to categorize, we like answers.”

She added, “I don’t actually think the world is any better or worse than it ever was. There’s always been inequity and injustice, and a lot of people were poor [before]. But because of the Internet and the [media’s] pressure to advertise the negatives, everyone knows about it [now].”

While turning to like-minded souls on social media outlets such as Facebook may provide temporary solace, it isn’t a solution. In fact, it can often make things worse.

The APA survey found that nearly 4 in 10 people reported political and cultural discussions on social media as causing stress.

But what can you do to treat headline stress disorder?

Channeling that stress into action is a good place to start.

Stosny says he’s sent clients to protest marches and suggested writing letters to their Congressmen as forms of treatment.

“The problem with headline stress disorder is [a feeling of] powerlessness,” he said, explaining that taking some form of positive action helps reduce that feeling.

It’s an approach that Glenn Garber says has helped him. He got involved in political campaigns at the state level and also reduced his news consumption time.

“You have to, it’s too much bad news,” Garber said. “Continually checking on the news is like your team is getting slaughtered in a game and you keep going back to get sneak peaks in the rout.”

Charlene Jaszewski says she’s also taken similar steps to reduce her headline stress and recommends the same to others who may be feeling it. She points out that even small efforts can make a big difference, such as supporting a local business you know hires immigrants if current immigration policies are upsetting you.

McNaughton-Cassill, suggests volunteering with a local organization that helps children can be an excellent way of channeling stress in a positive way as well.

Sometimes stepping away can be the breath of fresh air you need. Take a social media break and avoid absorbing news before you go to bed.

If you feel headline stress is affecting your life, Joan Rubin-Deutsch, a retired therapist in Massachusetts, advises looking at how you usually find balance in your life. She says everybody has a coping mechanism that works best for them. Meditate or use your time to do something you enjoy. Go out and catch a fun film or listen to music. Exercise or delve into your favorite hobby.

“What can you do to get yourself more in control?” she asks.

Rather than releasing cortisol — the body’s stress hormone — doing something pleasurable like eating a good meal, cuddling with a loved one, or going for a nature walk releases “happy hormones”— dopamine, serotonin, oxytocin, and endorphins.

Seeking support from and spending time with friends and loved ones is crucial for a person suffering from headline stress disorder.

The APA “Stress in America” survey noted that while 7 in 10 people reported having someone they could turn to for emotional support, half of those responding said they could have used a little more support than they received. And in recent years, a number of studies have documented how social isolation or loneliness can be detrimental to your health, not unlike smoking and obesity.

Jaszewski says realizing she could do things locally to channel the stress she was feeling about larger issues was the epiphany that helped her most after her “breakdown” in the car that morning.

Today, she works on keeping a headline of her own in mind every day: “Work on what you can and try not to be so upset about things you can’t change.”