The Government has banned pharmaceutical companies in the UK from selling the measles vaccine to other countries.

This move makes MMR – a vaccine which protects against measles, mumps and rubella – the latest to have been added to a ‘no export’ list.

It comes after a list of another 27 medications were banned in October from being parallel exported by firms in the UK.

Parallel exporting is when a company buys drugs brought into the UK for patients in this country and then sells them to other nations and ships them back out.

This won’t affect the NHS’s supply but only people with private healthcare. 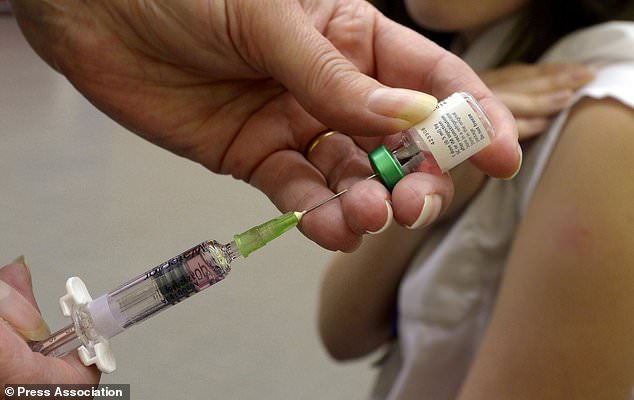 Supplies of the measles, mumps and rubella vaccine for private patients have been ‘protected’ by a Government move to ban UK-based companies from importing supplies just to sell them to other companies (stock image)

The Government’s move comes as measles cases across Europe have skyrocketed this year and global demand for the jab is rising.

Private British stocks of the vaccine will be ‘protected’ by the move which stops companies buying them just to sell them to clinics overseas.

The NHS, however, has its own direct supply which cannot be interfered with by other wholesalers in the UK.

Health minister Nicola Blackwood said: ‘These restrictions will ensure those who don’t qualify for the national NHS programme or with private healthcare can also receive protection from the MMR vaccine.

‘We have an outstanding national vaccination programme and the vast majority of people are eligible for free immunisation on the NHS.

‘There are no issues with the national NHS programme.’

The rule will affect fewer than one per cent of the total number of MMR jabs – more than a million are given out by the NHS every year.

Other drugs which have been restricted by the Department of Health include hormone replacement therapy (HRT) for menopausal women, and epipens.

The Government’s decision has been motivated by a surge in global demand for the vaccine as measles cases have rocketed this year.

By the end of June the World Health Organization had already recorded 364,808 cases worldwide, more than triple the entire of 2018 and the most since 2006.

Experts say this is because not enough children are being vaccinated, meaning communities are losing their en masse protection.

The UK was one of four countries to this year lose its measles-free status, along with Albania, Greece and the Czech Republic.