Breastfeeding rates fall across England, official figures reveal (so, how many children are fed the ‘natural way’ in your area?)

Breastfeeding rates in England have dropped, official figures have revealed.

Figures show 57.3 per cent of English mothers stop breastfed their baby before they turned two months old in 2017/18.

Experts have warned the decline in breastfeeding rates may be depriving thousands of babies of important health benefits.

The data, released today, also revealed a wide variation around the country.

More than eight in 10 children in the London borough of Tower Hamlets are still breastfed after six weeks, whereas only 18 per cent are in Knowsley, Merseyside. 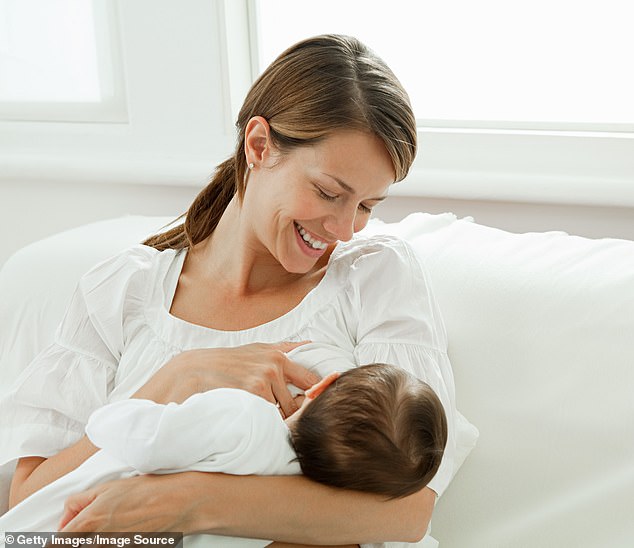 Less than half of women continue to breastfeed their baby after six to eight weeks in the UK, potentially meaning both mother and baby are missing out on health benefits

Other areas with low levels include Halton, Cheshire, and Sunderland, where fewer than a quarter of new mothers continue to feed beyond six weeks.

More than half of the 150 areas in the figures did not have percentage data available.

The World Health Organization says children should be fed only breast milk for the first six months of their lives, and feeding should continue until they’re at least two years old.

And breastfed babies also have a lower chance of cot death, childhood leukaemia, allergies, diabetes or becoming overweight when they grow older, the NHS says.

‘England could be doing better when it comes breastfeeding,’ said Carmel Lloyd, head of education at the Royal College of Midwives.

‘Typically the number of women who start breastfeeding in the UK is at around 80 per cent, but unfortunately after a couple of weeks this number falls dramatically.

‘Low breastfeeding rates in parts of the UK unfortunately indicate a much bigger social and cultural problem that needs to be tackled.

‘There are some areas where many generations of women haven’t been given the example of breastfeeding or offered the right support to enable them to initiate and sustain breastfeeding if they choose to breastfeed.

WHERE THE MOST BABIES ARE BREASTFED FOR MORE THAN SIX WEEKS

WHERE THE FEWEST BABIES ARE BREASTFED FOR MORE THAN SIX WEEKS

‘For women who choose to breastfeed it is so important that they feel supported not only by midwives, but by their family, friends and wider society too, particularly when it comes to breastfeeding in public.’

Breastfeeding is also beneficial to mothers, and can reduce their risk of breast cancer, ovarian cancer, osteoporosis, diabetes and cardiovascular disease.

Previous research has estimated that five per cent of breast cancer cases in the UK are caused by not breastfeeding.

Among the areas with the most children who are breastfed beyond eight weeks are the London boroughs of Lewisham and Kingston upon Thames – where the figure is higher than three quarters.

Professor Viv Bennett, chief nurse at Public Health England added: ‘Breastfeeding provides the best nutritional start in life and is something that mothers and babies learn together.

‘We know some mothers may need support and encouragement to help them start and continue with breastfeeding.

‘That’s why we offer trusted advice to parents through our Start4Life campaign resources and to midwives and health visitors through professional guidance.’