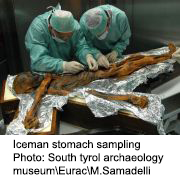 The oldest naturally preserved ice mummy was discovered in the Eastern Italian Alps in 1991.

Researchers said their analysis of Otzi’s stomach contents offer important clues about the eating habits of people in Europe going back more than 5,000 years, and also reveal clues about their food preparation.

Otzi’s last meal showed a “remarkably high proportion of fat in his diet, supplemented with wild meat from ibex and red deer, cereals from einkorn, and with traces of toxic bracken [ferns],” said researcher Frank Maixner. He’s with the Eurac Research Institute for Mummy Studies in Bolzano, Italy.

The study was published July 12 in the journal Current Biology.

The high-fat diet was unexpected, but “totally makes sense” due to the extreme environment in which Otzi lived, according to the researchers.

“The Iceman seemed to have been fully aware that fat represents an excellent energy source,” Zink added.

The wild meat consumed by Otzi was eaten fresh or perhaps dried. The presence of toxic bracken particles could be due to Otzi taking bracken as a way to treat intestinal problems caused by parasites, or by using the leaves to wrap food.

The researchers also discovered traces of Otzi’s original digestive bacterial community and plan to try to reconstruct it.

The South Tyrol Museum of Archaeology has more on Otzi.