Kate Gibbs's life, at 78kg, is everything her surgeon promised her it would be. She can keep up with her six-year-old daughter Misty at a playground. She can walk up a set of stairs without heaving to fill her lungs, and she can sit comfortably in movie and aeroplane seats.

But there are many, many unexpected side effects of losing 50kg that Kate didn't expect – some amazing, some alarming.

Like how she went for a job interview and the interviewer complained to Kate how "morbidly obese" the previous candidate had been. 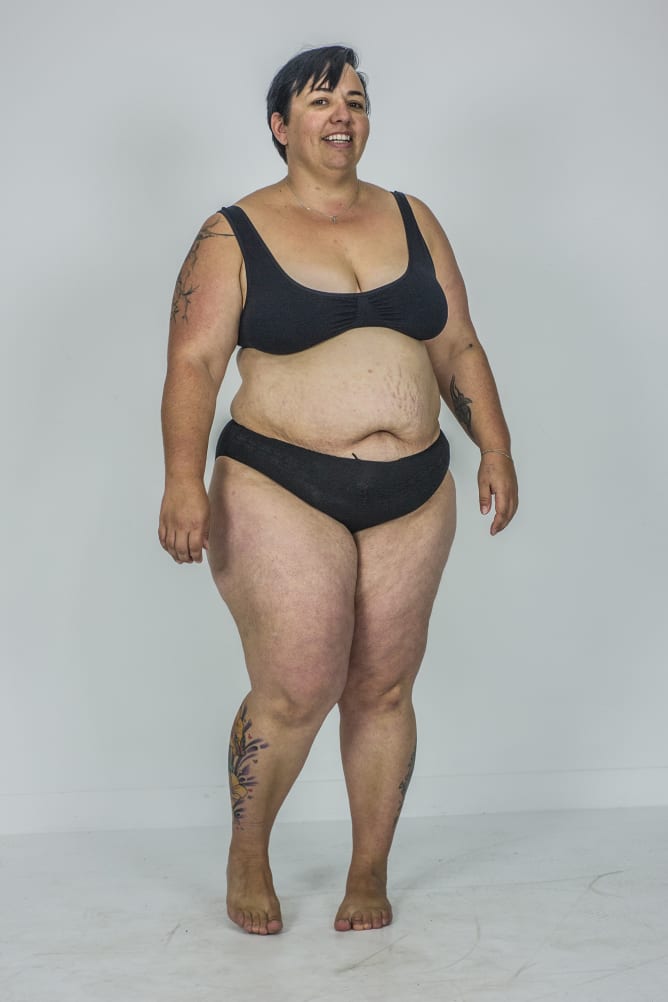 And how she now gets stared at by both women and men.

She no longer has to spend the line-up for a rollercoaster ride on the Gold Coast stressing about whether the safety bar is going to extend down over her large breasts, or she'll be forced off the ride in front of a crowd.

But one of the biggest – and most pleasant surprises – has been good news not just for 37-year-old Kate, but also for her partner Jeremy. Kate never realised, but at 128kg, her stomach was always getting in the way during sex.

"Our sex life used to be OK, but it's a hell of a lot better now," Kate says.

"A lot of it is about just having more energy." 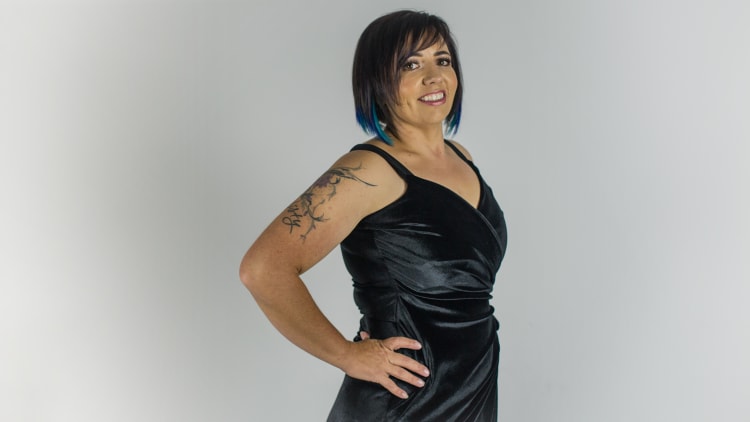 A better experience in bed was an unexpected win for Kate and partner Jeremy. Photo: Karleen Minney

Early last year, after more than a decade of dieting, exercising, Michelle Bridges-ing and Jenny Craig-ing, Kate made the extreme decision to undergo bariatric surgery – weight loss surgery for the obese. She'd never been an overweight child or teen, but put on 26kg rapidly in 2016 when she quit smoking.

Kate, an aged care case manager, had 85 per cent of her stomach removed during a vertical sleeve gastrectomy, known colloquially as a "gastric sleeve".

The surgery, which left Kate $9000 out of pocket, was performed by Canberra bariatric surgeon Dr Charles Mosse, one of the early adopters of gastric sleeve surgery in Australia after witnessing its success with obese patients overseas. Between 2010 and 2018, gastric sleeves were the fastest growing bariatric surgery procedure in the US.

The objective of a gastric sleeve operation is to significantly reduce the capacity of the stomach, and therefore the level of ghrelin, or "hunger hormone" being produced. During the two-hour operation, the bulk of the stomach is removed, leaving a long thin passage "or sleeve" for food to be processed in.

Everybody overeats massively. We have a tendency to go, 'There's still food on my plate so I need to finish that'.

The stomach is cut with bariatric scissors and repaired with titanium staples. Great care is taken to oversew the staple line with one long single suture; leakage of gastric acid from the stomach through the staples and into the body can be fatal.

About 200 Canberrans have the gastric sleeve operation each year, and the demand is growing, especially among men. 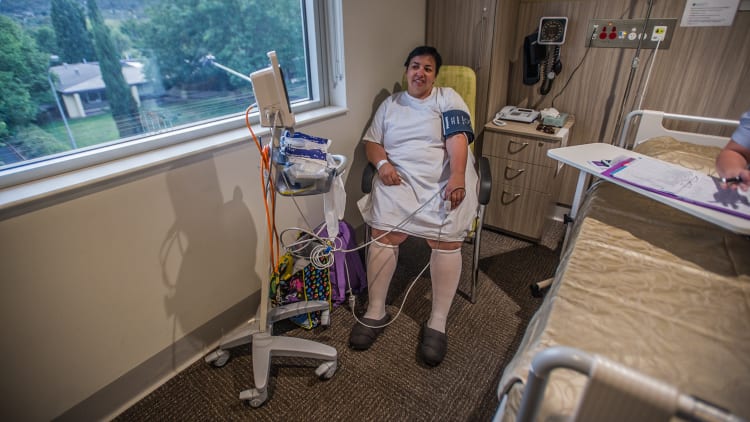 Kate awaits the removal of 85 per cent of her stomach at the National Capital Private Hospital. Photo: Karleen Minney

According to Dr Mosse, the sleeve gastrectomy is considered a metabolic operation which assists, in particular, people with diabetes. He said the surgery was recommended for people with a body mass index (BMI) over 40 or patients with a BMI over 35 with comorbidities.

She was placed in the "morbidly obese" category, a term that made her flinch every time she heard it.

Pre-surgery diet involves three weeks of drinking protein shakes and eating lean meat and vegetables, mostly in an attempt to reduce the size of the liver to make access to the stomach during the operation easier.

Post-surgery diet is all about allowing the new, smaller stomach to heal. Patients work their way up from water and broth in week one to fish and mashed potato in week four. 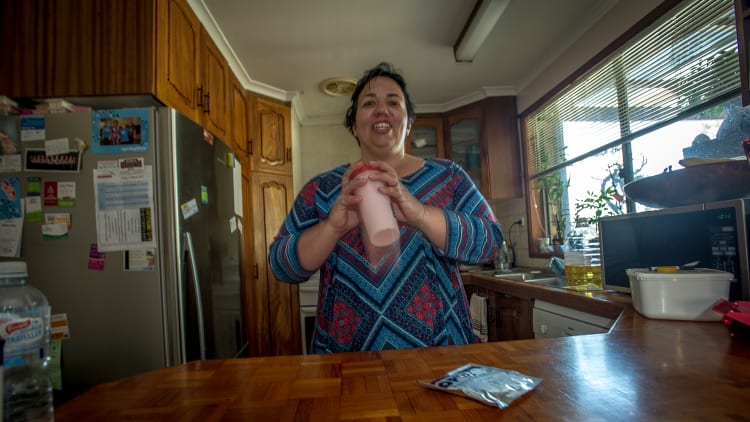 Nutrient-rich shakes were the basis of Kate's diet for weeks after surgery. Photo: Karleen Minney

Maintaining her gastric sleeve – namely, how much she puts in it – is always top of Kate's mind. Given the incredibly limited capacity of her new stomach, she can't eat and drink water at the same time. It's one or the other. Bread is her mortal enemy, and steak has to be braised for hours before she can even attempt a mouthful.

Having too much food in her new, smaller stomach "is awful, like you've had three Christmas dinners in the space of 15 minutes" and she suddenly understands what people mean when they say, "I ate so much I could burst".

"I won't lie, it's sometimes painful," she said. "Every time I sit down to eat, I'm being very very careful." 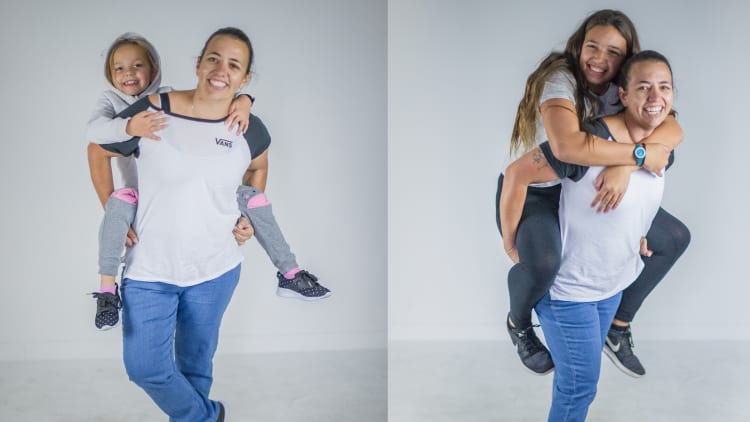 Eight weeks post surgery, Kate had lost the equivalent weight of her daughter Misty. Today, she's lost the same weight as 14-year-old daughter Charlee. 'I have no idea how I used to walk around being this heavy,' Kate says. 'No wonder I was in so much pain. I'd have to roll my feet on a tennis ball every night for relief.' Photo: Karleen Minney

While most people can pinpoint the exact moment they made the decision to have bariatric surgery, Kate describes her decision as "a build-up of moments". 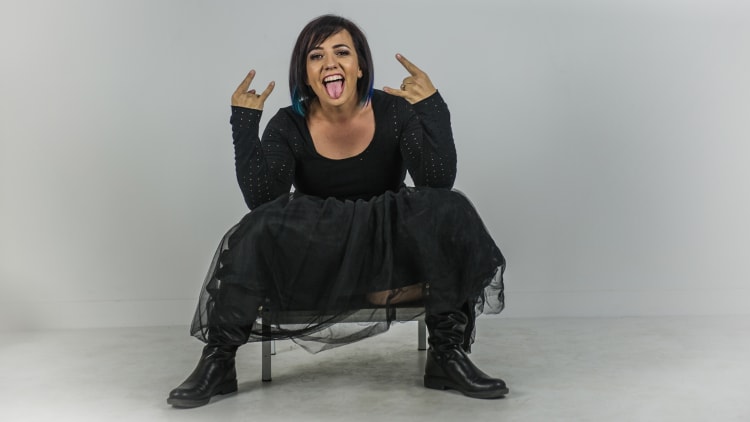 Kate's confidence – missing for more than a decade – is now back in spades. Photo: Karleen Minney

People ask her constantly about sagging skin – "it's actually dealt with the weight loss pretty well, I don't have any excess skin hanging at all" – and also ask whether she thinks she "cheated" by having such extreme surgery.

"It's far from easy having surgery. It's really bloody hard. Six weeks of eating basically water and moosh.

"And I just didn't have the money to continually invest in expensive diets and the gym.

"Now I've got all that weight off, it's just a matter of maintaining it, which is a lot easier to maintain than trying to lose 50 kilos." 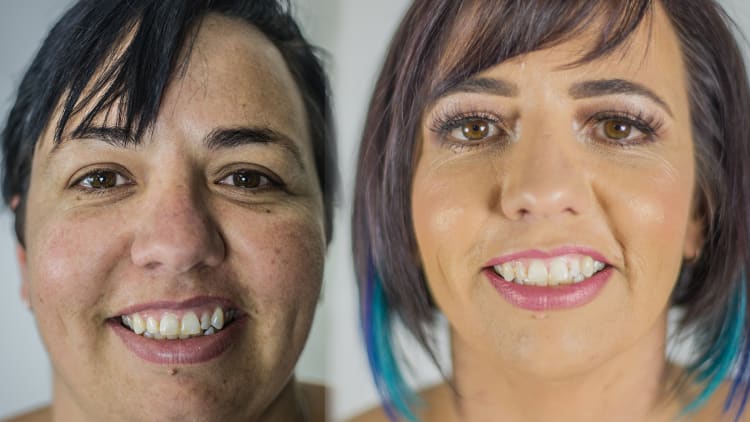 Where has she lost most of the weight from? 'My bum, my boobs and my face,' Kate says. Photo: Karleen Minney

Meat and three veg and roast lamb were her favourite dinners before surgery.

Now Kate eats one or two vegetables and a piece of meat the size of a flattened tennis ball from a tiny child's bowl featuring Ana and Elsa from Frozen. She no longer skips breakfast but one habit has remained; a penchant for late-night eating.

She manages this habit by having healthy snacks on hand; muesli bars and fruit instead of salt and vinegar chips and entire blocks of Cadbury Top Deck. She also goes to bed early to avoid her former propensity for eating mindlessly while watching Netflix. 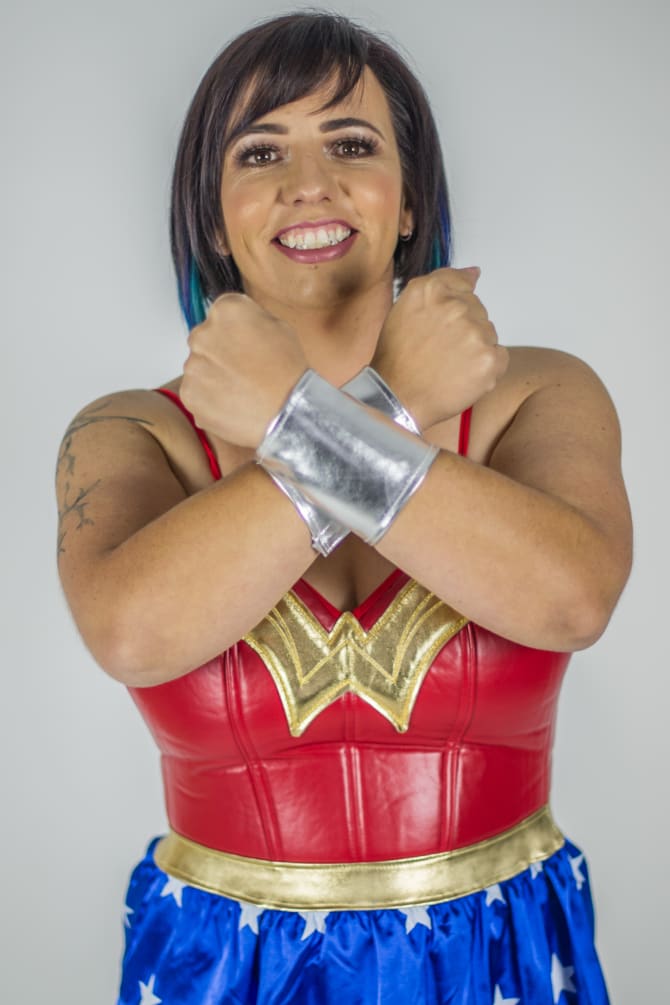 'I thought I was OK when I weighed 128kg, but I wasn't conscious of just how miserable I was,' Kate says. Photo: Karleen Minney

"A lot of people say to me, 'How did you lose the weight?' and I'm always honest and say I had surgery," she says.

"And since my operation, it's just opened my eyes to the fact that we all overeat.

"Everybody overeats massively, ginormously. So I'm eating out of a kid's bowl now, and I don't push myself.

"It's a matter of you know, not pushing. We have a tendency to go, 'There's still food on my plate so I need to finish that'."

I didn't realise how depressed I was and how that depression affected everything I did in my life.

With a teenager in the house susceptible to messaging around food, weight and body image, Kate says she's transparent and honest with the girls about her weight loss journey. Charlee and six-year-old Misty were there to greet Kate after the operation and have seen their mum transition from eating almost an entire marble cheesecake on her birthday to a tiny bowl of fruit. They love her new energy levels.

Both daughters watched on as Kate undertook her final photo shoot with Fairfax Media. A proud Charlee even gave mum an impromptu hug of pride between shots. 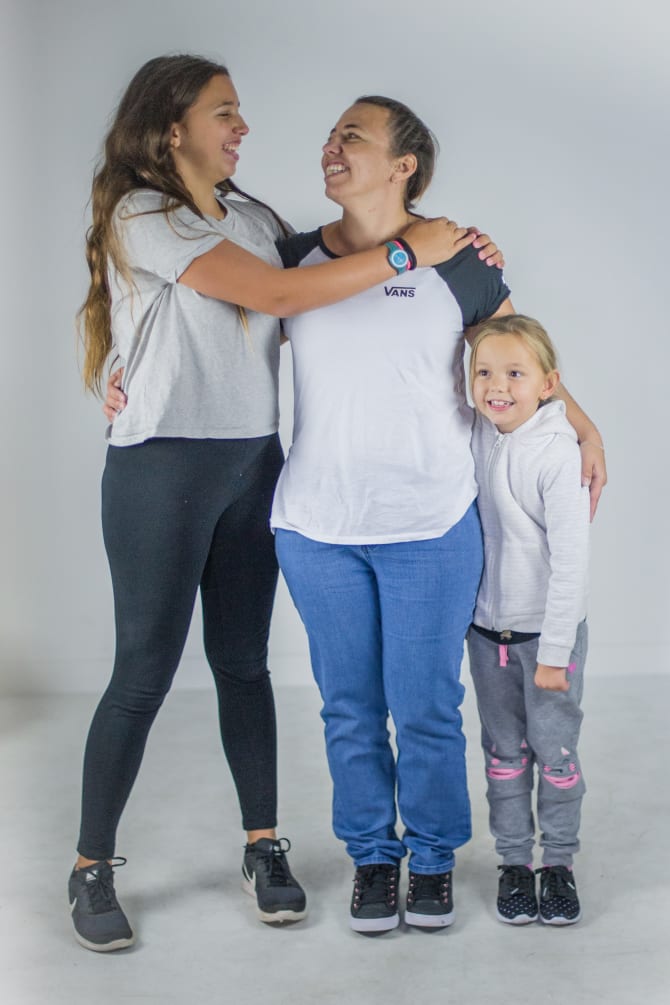 Kate's daughters Charlee, 14, and Misty, 6, have 'been with me every step. And we had some shocking days, but also lots of amazing days'. Photo: Karleen Minney

"It's so great for the girls to see the shoot, to see how far I've come," she says.

"When you're together day-to-day, you don't realise that 50kg is a massive amount of weight to lose and just how drastically it's changed your life.

"I think they're thankful their mum is so much healthier now and in their own way I think they can tell I'm going to be around for a lot longer than I maybe would have been otherwise." 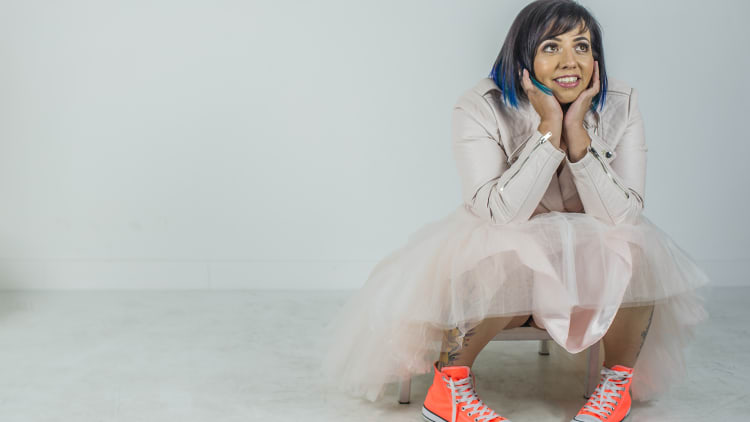 "It's something that I'd highly, highly recommend.

"You're very confident in yourself. And you know what? It's not until now that I've lost all the weight that I finally realise just how miserable I was at my heaviest.

"I didn't realise how depressed I was and how that depression affected everything I did in my life.