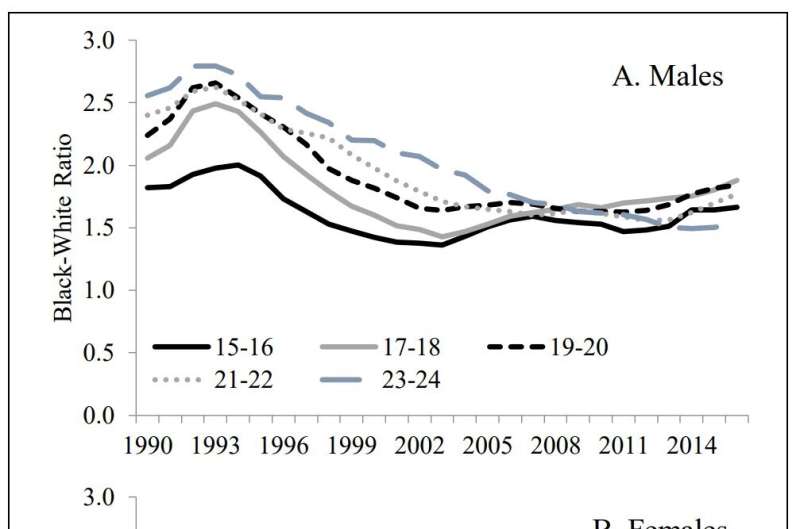 Preventable causes of death are driving early-life disparities in black and white young adults in the United States, according to a new study led by Oxford’s Leverhulme Centre for Demographic Science, published in Demography.

Conversely, young white males and females were more likely to die from suicide, transport, and drug-related deaths. Mortality rates for these causes of death have been consistently higher for the white population.

Dr. Andrea Tilstra, lead author of the study and postdoctoral researcher at the Leverhulme Centre, notes, “With the exception of cancer, the most common causes of mortality for young adults are almost entirely attributable to external events, which could be prevented with appropriate interventions.”

The study analyzed the five most common causes of mortality for 15-24 year olds in the United States from 1990 to 2016—transport accidents, suicide, homicide, drug-related deaths, and cancer. Whilst the gap in life expectancy reduced slightly over this time, life expectancy is still lower for young black adults, and large disparities across the most common causes of mortality remain unchanged.

Dr. Tilstra adds, “Previous studies have taught us that racism gets ‘under the skin’ and leads to persistently worse health outcomes for the black population. Our study adds to this by highlighting how ‘outside the skin’ factors can prove harmful for both black and white young adults. More needs to be done to understand why there are differences in mortality between black and white Americans at younger ages.”

The paper concludes that, acknowledging and addressing the harmful social exposures and experiences that result in these preventable and external causes of death, is of paramount importance for reducing early-life mortality in the US once and for all.