A new experimental HIV vaccine may prevent infection from dozens of strains of the virus, new research has revealed.

Current treatments for HIV require patients to take several different drugs that control the virus from multiplying and spreading.

But, if successful, this would be the first vaccine available that protects people from contracting HIV. 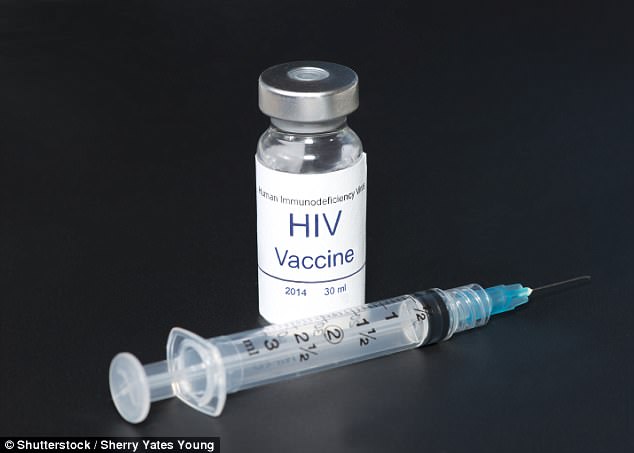 A new experimental HIV vaccine may prevent dozens of strains of the virus, new research has revealed

Worldwide, more than 35 million people are infected with HIV, the virus that leads to the potential deadly disease AIDS.

Once a person contracts HIV, the virus sets about attacking and destroying immune cells that normally protect the body from infection.

Understanding of how to control HIV, a disease whose death rate has plummeted since its peak in the early 1980s, has increased over the last several years.

You can get or transmit HIV only through specific activities, most commonly through sexual behaviors and needle or syringe use.

They’re often broken into six groups because they work in different ways.

Doctors recommend taking a combination or ‘cocktail’ of at least two of them.

Called antiretroviral therapy, or ART, it can’t cure HIV, but the medications can extend lifespans and reduce the risk of transmission.

NNRTIs bind to a specific protein so the virus can’t make copies of itself.

These drugs block a protein that infected cells need to put together new copies of the virus.

These drugs help block HIV from getting inside healthy cells in the first place.

This stops HIV before it gets inside a healthy cell, but in a different way than fusion inhibitors. It blocks a specific kind of ‘hook’ on the outside of certain cells so the virus can’t plug in.

These stop HIV from making copies of itself by blocking a key protein that allows the virus to put its DNA into the healthy cell’s DNA.

Researchers have discovered that naturally occurring antibodies can prevent multiple strains of the virus from infecting human cells.

The trouble has been that half of all people living with HIV make these antibodies, and only do so after several years of living with the virus.

Scientists have pinpointed the sites, or epitopes, on HIV where these antibodies bind to prevent the virus.

For the current study, the researchers looked at an epitope called the HIV fusion peptide, a short string of amino acids that sits on the surface of the spikes that the HIV virus uses to bind to the cells it infects.

According to the scientists, they chose this epitope because its structure is the same among most HIV strains and the immune system generally makes a strong response to it.

Researchers created several different immunogens, or proteins which cause the immune system to respond, in order to make the vaccine.

Using a collection of antibodies that target the fusion peptide epitope, the scientists studied which immunogens most successfully sent antibodies to the epitope.

They discovered that the best immunogen that evoked a strong immune response was a protein consisting of eight amino acids.

The researchers tested several combinations of the injection on mice infected with HIV and looked at how the antibodies worked.

After the antibodies attached to the fusion peptide epitope, they neutralized as much as 31 percent of viruses from a panel of 208 HIV strains.

The same results were rendered after the scientists also tested the process in guinea pigs and monkeys. The researchers hope to begin preliminary human trials of the new vaccine regimen by mid-2019.

‘NIH scientists have used their detailed knowledge of the structure of HIV to find an unusual site of vulnerability on the virus and design a novel and potentially powerful vaccine,’ said NIAID Director Dr Anthony Fauci.

‘This elegant study is a potentially important step forward in the ongoing quest to develop a safe and effective HIV vaccine.’