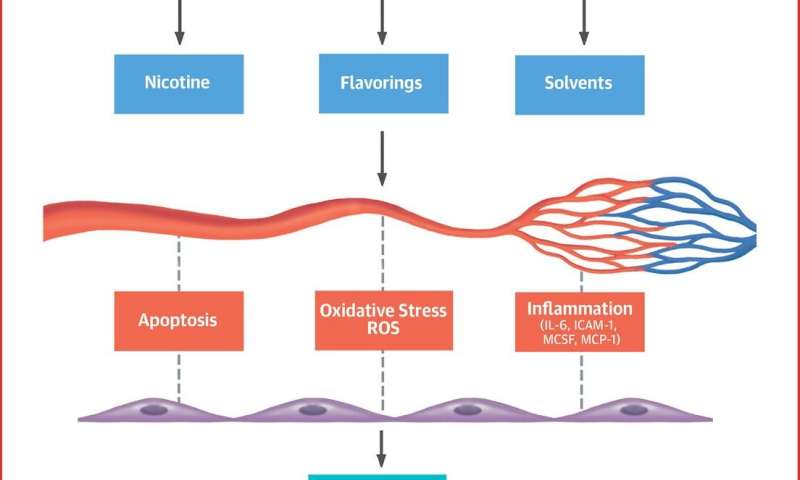 The flavoring liquid for electronic cigarettes, or e-cigarettes, may increase the risk of cardiovascular disease when inhaled, according to a study led by researchers at the Stanford University School of Medicine.

The scientists investigated the effect of the e-liquids on cells called endothelial cells that line the interior of blood vessels. They found that, when grown in a laboratory, endothelial cells exposed to the e-liquids—or to blood collected from e-cigarette users shortly after vaping—are less viable and exhibit significantly increased levels of molecules implicated in DNA damage and cell death. The cells are also less able to form new vascular tubes and to migrate and participate in wound healing.

The severity of the damage, aspects of which occur even in the absence of nicotine, varies among popular flavors, the researchers said. Cinnamon and menthol were found to be particularly harmful.

“Until now, we had no data about how these e-liquids affect human endothelial cells,” said Joseph Wu, MD, Ph.D., director of the Stanford Cardiovascular Institute and professor of cardiovascular medicine and of radiology. “This study clearly shows that e-cigarettes are not a safe alternative to traditional cigarettes. When we exposed the cells to six different flavors of e-liquid with varying levels of nicotine, we saw significant damage. The cells were less viable in culture, and they began to exhibit multiple symptoms of dysfunction.”

The researchers studied human endothelial cells generated in the laboratory from what are called induced pluripotent stem cells, or iPS cells. Human iPS cells can become many different cell types, and they provide an ideal way for researchers to closely study cells that would be difficult to isolate directly from a patient.

This study was the first to use endothelial cells derived from iPS cells to directly investigate the effect of e-liquids with and without nicotine on their viability and function.

A paper describing the findings will be published online May 27 in the Journal of the American College of Cardiology. Wu is the senior author. Former postdoctoral scholars Won Hee Lee, Ph.D., now an assistant professor at the University of Arizona, and Sang-Ging Ong, Ph.D., now an assistant professor at University of Illinois-Chicago, are the lead authors.

E-cig use has skyrocketed

In the United States, cardiovascular disease is responsible for about one-third of smoking-associated deaths in smokers, and secondhand smoke causes approximately 34,000 early deaths from heart disease each year in nonsmokers. Endothelial cells line the interior surface of blood vessels and play a critical role in heart and cardiovascular health. Although some studies have suggested that e-cigarettes deliver lower levels of carcinogens to users than do conventional cigarettes—perhaps decreasing the risk of cancer—the effect of e-cigarette use on vascular health has been unclear.

Despite these uncertainties, the use of e-cigarettes has skyrocketed since their introduction about a decade ago, particularly among young people. The Food and Drug Administration estimated that more than 3.5 million middle and high school students used e-cigarettes in 2018, though sales to minors are prohibited. In 2018, the FDA restricted the sale of flavored e-cigarettes to adults-only venues, with the exception of tobacco, menthol and mint flavors, which can be sold wherever traditional cigarettes are sold.

“One in five high school students have tried e-cigarettes, perhaps because they feel they are relatively safe,” Lee said. “But we found the e-liquids caused changes in the endothelial cells that are closely related to those seen during the development of cardiovascular disease.”

The researchers investigated the effect of six different popular e-liquid flavors—fruit, tobacco, sweet tobacco with caramel and vanilla, sweet butterscotch, cinnamon, and menthol—with nicotine levels of 0, 6, and 18 milligrams per milliliter on endothelial cells derived from human iPS cells. They found that while several of the liquids were moderately toxic to the endothelial cells, the cinnamon- and menthol-flavored e-liquids significantly decreased the viability of the cells in culture even in the absence of nicotine.

Exposure to the e-liquids also increased the relative levels of reactive oxygen species—molecules that can cause DNA damage—and the levels of molecules associated with programmed cell death.

The researchers also found that exposure to the cinnamon and menthol flavored e-liquids significantly disrupted the ability of the cultured cells to form capillary-like tubular structures associated with the growth of new blood vessels. The e-liquid flavored with caramel and vanilla also disrupted growth, but not as severely. The cells exposed to cinnamon flavor and caramel and vanilla flavors exhibited an increased uptake of low-density lipoproteins and lipids—processes commonly associated with inflammation and endothelial dysfunction—and a reduction in their ability to migrate to heal wounds or scratches.