Drinking water after exercise could actually CAUSE cramps – not prevent them, say scientists who find electrolytes are to blame

It’s long been said that you should drink water after exercising to stop yourself getting cramp.

But scientists have debunked the age-old theory, saying doing so could actually make you more likely to suffer from the painful spasms.

Instead, consuming more electrolytes could be the key to stopping the twinges because reduced levels of salt and minerals trigger the problem. 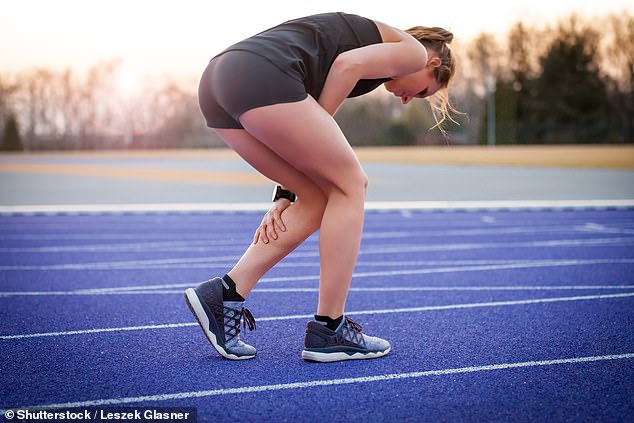 Scientists from Perth, Australia, say they are the first to prove a reduced number of electrolytes in the body is to blame for painful muscle cramps (stock image)

Australian researchers gave exhausted men different types of drinks and zapped them with electricity to test how well they withstood leg cramps.

Researchers at Edith Cowan University in Perth made 10 men run on a treadmill in a hot room until they sweated out two per cent of their body weight.

When they finished, half the men were given normal water to rehydrate, while the other half were given sports drinks with electrolytes in.

Electrolytes are minerals in the blood, which include salt, potassium, bicarbonate and chloride – they are depleted when people sweat during exercise.

A week later the same experiment was repeated and the men had the drink they weren’t given the first time.

‘There have been many theories proposed as to what causes muscle cramps in the past,’ said Professor Ken Nosaka, study author.

‘But this is the first time that we have conclusively shown that electrolyte depletion is the primary cause of muscle cramps.’

Whereas those who were given the electrolyte drinks had a ‘significantly reduced’ likelihood of the painful experience.

They tested each volunteer’s susceptibility to cramp by channeling an electric current into their calf muscle.

The less electricity needed to trigger the muscle spasm, the more susceptible they were – and the water-drinkers responded to weaker currents than the other men.

‘When we exercise, we sweat out fluid that contains electrolytes,’ said Professor Nosaka.

‘So when we replace this lost fluid with pure water, we are actually diluting the electrolytes in our system which causes muscle cramp.’

The team’s research stopped short of explaining how lower numbers of electrolytes could trigger the cramps.

But this could be down to the minerals’ role as nerve signal transmitters – fewer of them may reduce the body’s ability to properly regulate muscle contractions.

Professor Nosaka now plans to do a follow-up study to work out whether consuming electrolytes could prevent cramp.

The research was published in the journal BMJ Open Sport & Exercise Medicine.

When asked what do about leg cramps in a Q&A session the Mail on Sunday’s fitness guru, Matt Roberts, reveals eating well and stretching could be key.

Q: Are there any strength exercises helpful for easing terrible leg cramp? I walk two or three times a week, play table tennis and eat healthily, yet my legs tire, ache and cramp easily, mostly at night. Doctors don’t have the answer. I am 69.

A: Leg cramps can occur for a number of possible reasons and it is often difficult to pin down the exact cause.

Some people get them from under-use of muscles which can cause poor circulation, while others over-work muscles with excessive exercise, making it hard for them to recover.

Dehydration is another culprit, as is a lack of essential nutrients such as magnesium in the diet.

If your circulation is good and you are well hydrated and eating a balanced diet rich in leafy green vegetables, your chances of severe leg cramps decrease.

We should be physically active on a daily basis, in order to stimulate the blood supply to all of the muscles in the body. A lack of movement halts blood supply which may trigger cramps, so do some moderate to vigorous exercise most days of the week.

This can be anything from walking, to a long cycle ride, or regular gym trips involving running on a treadmill and increasing speed at intervals.

Stretching for about ten minutes every day is also key. This is especially important after running or cycling as it helps regulate blood flow which aids the muscles’ recovery from intense exercise.