Why do we need tonsils? Ear, nose and throat doctor answers 10-year-old’s burning question (and reveals why we’re often better off without them)

If you’re reading this, chances are you’ve had some trouble with your tonsils.

Thousands of people get these small organs every year because of recurring infection and sore throats. And, fortunately, the truth is that unless you are a baby, you don’t really need them.

Here, Simon Carney, Professor of Otolaryngology at Flinders University, Adelaide, explains their important – but not essential – function to a inquisitive 10-year-old called Ryan, who emailed his question in for a piece on The Conversation.

First, Prof Carney explains what our tonsils actually are… 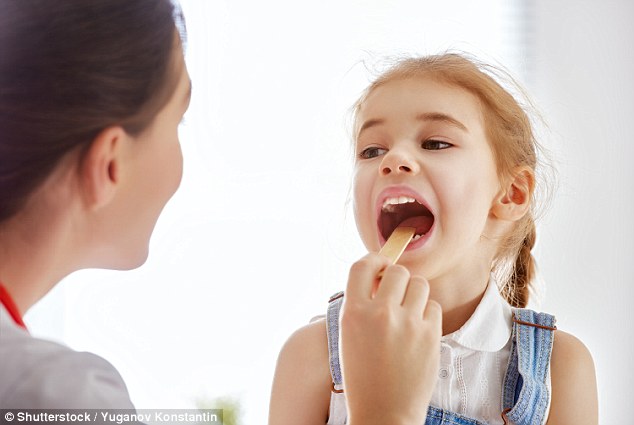 Hard to swallow: If tonsils keep getting infected, they may be more trouble than they’re worth

The technical term for your tonsils is palatine tonsils, which means the tonsils of the palate. These lumpy things sit on either side at the back of our mouths.

The palatine tonsils are one pair of a set of four tonsils that form a circle at the top of our throat.

The adenoids and the tonsils are linked by a thin strip of tonsil tissue on each side; these are called the tubal tonsils.

Together this whole ring of tonsil tissue is called Waldeyer’s ring, named after a nineteenth century German anatomist.

Tonsils are important for immune defence 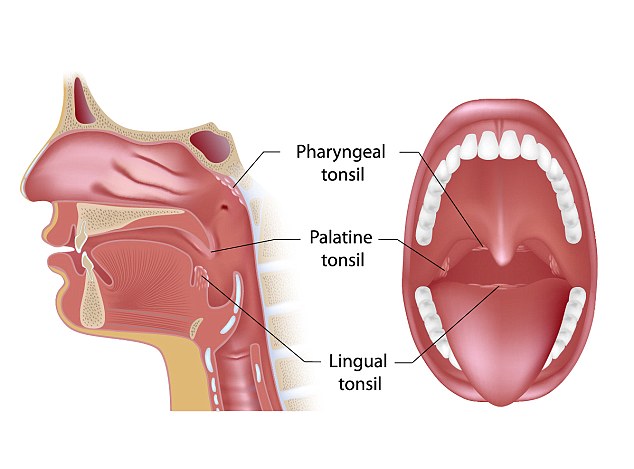 Useful: In early life, the lymph glands are not completely developed, and our bodies rely on our tonsils to trap bugs and foreign material that we either breathe in or swallow

Waldeyer’s ring forms part of our immune system, along with our lymph glands (which are either side of your neck).

In early life, the lymph glands are not completely developed, and our bodies rely on our tonsils to trap bugs and foreign material that we either breathe in or swallow.

By trapping these particles, the body begins to recognise them as potentially dangerous things and produces white blood cells and antibodies to kill them so they can’t harm us.

Tonsil tissue is particularly good at trapping these particles as it has valleys and holes (called crypts) which increase its surface area.

Tonsil tissue is particularly important in the first six months of life. After this, our lymph glands take over most of the work and the tonsils are essentially out of a job. 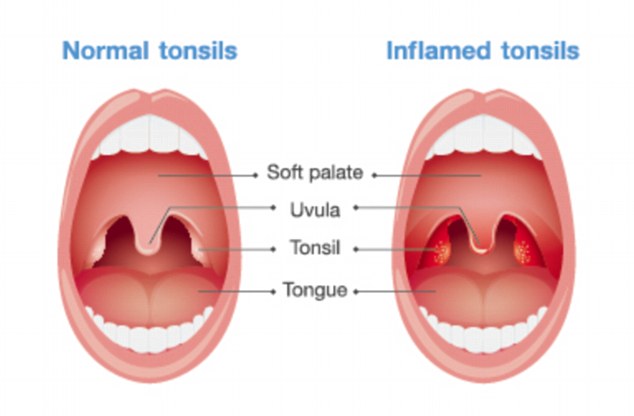 Fact: The technical term for your tonsils is palatine tonsils, which means the tonsils of the palate. These lumpy things sit on either side at the back of our mouths

As we get older, food and germs can still land in the valleys and crypts.

They can then cause infections to develop, which lead to a sore throat or tonsillitis. Some infections can also cause the tonsils to grow in size.

Huge tonsils and adenoids can block the airway and cause snoring or swallowing and speech problems.

As nutrition and immunisation has improved, kids get tonsillitis less and less these days. Usually, an ear nose and throat surgeon like me gets called in to intervene more for obstruction (blockage) than repeated infections.

If tonsils are a problem, an ear, nose and throat surgeon can remove them by doing an operation. If they are simply too large, they can be shrunk down using special instruments which remove the valleys and crypts. This leaves a thin bit of tonsil tissue behind.

Shrinking the tonsils down reduces the amount of pain kids get and also reduces the chances of bleeding after the operation. The downside is that, in rare cases, the bit we leave behind can get infected, or can regrow – although this is uncommon.

People sometimes worry that by removing the tonsils, we may be more likely to get infections. This is not actually the case. The lymph glands take over the role of protecting us.

If tonsils are too big or keep getting infected, they end up being more trouble than they’re worth.

Cuts in NHS budgets for tonsil surgery may have triggered a steep rise in life-threatening infections among children.

A study revealed that between 1991 and 2014 the number of youngsters under 14 treated for complications from throat bugs more than doubled.

The children who were treated needed emergency hospital attention for group A streptococcus, a bug that causes tonsillitis and ‘strep’ throat.

If that infection spreads into the body – becoming ‘invasive’ streptococcus – it can cause deadly sepsis or toxic shock syndrome. One in five patients who get it die within a week.

The researchers, who included scientists from Public Health England, suggest fewer tonsillectomies may be the reason.