The idea of leaving smartphones behind from a digital-detox holiday may seem impossible for some.

But a scientific study suggests the initial anxiety of ditching technology is soon replaced by benefits – including the feeling of ‘liberation’.

Researchers asked 24 volunteers – all were millennials except for two – who were going on holiday to limit their access to tech. 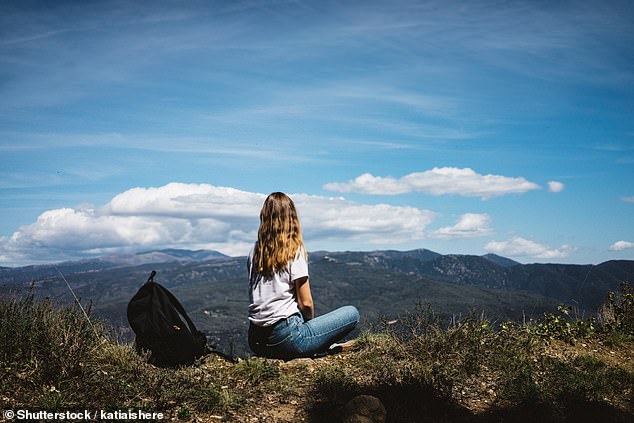 The idea of leaving smartphones behind from a digital-detox holiday may seem impossible for some. But a scientific study suggests the initial anxiety of ditching technology is soon replaced by benefits – including the feeling of ‘liberation’

This meant them cutting back on using their phone, laptops, tablets and services that come with them, including maps and social media.

All of them were asked to share their emotion changes when scrapping their digital lifestyles.

Those who travelled to urban destinations were more likely to experience anxieties and frustrations due to lack of navigation, the team said.

The urban travellers also said they struggled with the lack of instant information access and digital word-of-mouth recommendation seeking.

While people in rural and natural destinations felt withdrawal symptoms related to being unable to report safety or kill time.

However, most of the travellers ended up showing signs of acceptance, enjoyment and even liberation, according to the findings.

They also found that they learned more about sights, places and beaches because they were forced to talk to other travellers, especially locals.

ARE YOU ADDICTED TO YOUR SMARTPHONE?

If you answer yes to the majority of the researchers’ questions, below, you might use your phone too much.

Most of the participants disconnected for more than 24 hours, researchers wrote in the Journal of Travel Research.

And travellers who were part of a couple or group generally coped without having technology better than those alone.

Lead author Dr Wenjie Cai, from the University of Greenwich, said it was ‘helpful to see the emotional journey that these travellers are experiencing’.

‘In the current ever-connected world, people are used to constant information access and various services provided by different applications,’ she added.

‘However, many people are getting tired of constant connections through tech and there is a growing trend for digital-free tourism.’

Dr Cai added: ‘Our participants reported that they not only engaged more with other travellers and locals during their disconnected travels, but that they also spent more time with their travel companions.

‘We found some participants embraced and enjoyed the disconnected experience straightaway or after struggling initially.

‘While for others it took a little bit longer to accept the disconnected experience.

‘Many also pointed out that they were much more attentive and focused on their surroundings while disconnected, rather than getting distracted by incoming messages, notifications or alerts from their mobile apps.’

HOW CAN YOU SPEND LESS TIME ONLINE?

Being ‘on’ all the time can have a serious effect on our mind and our bodies, which is why a world-famous personal trainer and health author has shared his tips on how to do a digital detox.

Adelaide-born PT, James Duigan, 42, is the former personal trainer of Elle Macpherson and his words are often treated as gospel as he has also worked with the likes of Emilia Clarke, Rosie Huntington-Whiteley and Lara Stone.

Although many of us communicate with people online and check into social media, Mr Duigan believes we’ve never been lonelier:

‘The primary culprit is social media and our mobile phones. They can bring global communities together and provide a ceaseless source of inspiration at their best,’ he said.

‘But at their worst, they can be a constant nuisance, a constant distraction and stop you living in the present.

‘Even a quick scroll before bed can keep you awake at night or send your self-esteem plummeting as you’re barraged with Insta bums and impossible abs.’

Mr Duigan explained that social media platforms have been purposefully built to be addictive as each notification brings along the ‘happy hormone’ with it.

In a blog post on his website Bodyism, James revealed what his top three tips for a digital detox are.

As with any cold turkey experience, it can be hard to wean yourself off social media – but the trick is to replace the addiction with something else.

The app allows you to choose how long you want to block certain apps for – which means you can slowly coax yourself into blocking them for longer.

‘Creating that extra step between you and your ‘feed’ will help you resist the lure of mindless scrolling when your resolve is wearing thin,’ he said.

Mr Duigan’s third and final step is to be in the moment and make sure you’re tuned in on what is going on around you.

‘No pictures. No selfies. No boomerangs. No Snapchats. For one day at least. Don’t lose the moment by trying to capture it,’ he said.

‘Live in the moment and it will live long in the memory.’