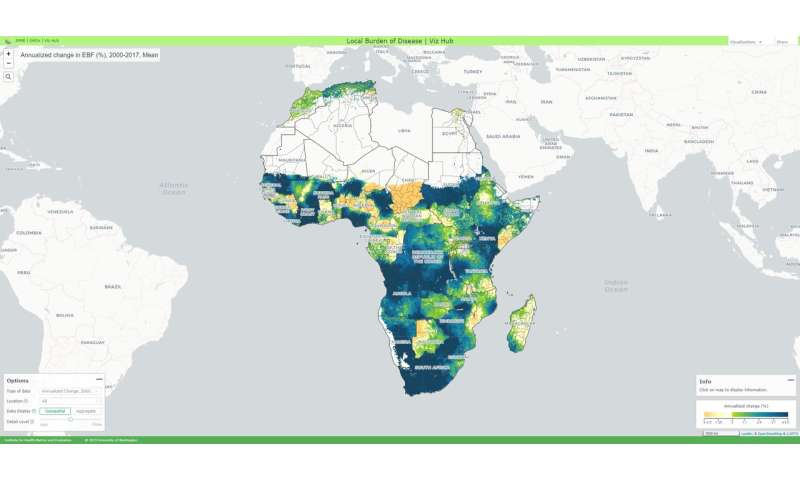 Only three African countries are expected to meet the global target for exclusive breastfeeding, “an unparalleled source of nutrition for newborns and infants, no matter where they are born,” according to a global health expert.

The three nations, Guinea-Bissau, Rwanda, and São Tomé and Príncipe, are singled out in a new study from the Institute for Health Metrics and Evaluation (IHME) at the University of Washington’s School of Medicine. The study, published today in Nature Medicine in advance of World Breastfeeding Week Aug 1-7, finds areas of persistent low prevalence in countries that have made progress overall. Detailed maps accompanying the analysis reveal vulnerable populations, especially those living in rural areas and in extreme poverty.

However, researchers note that that several nations, including Burundi, Rwanda, and parts of Ethiopia, Uganda, and Zambia were among the highest rates of exclusive breastfeeding levels in 2000 and 2017. Sudan had some of the “highest and most consistent rates of increase” toward the exclusive breastfeeding goal of the World Health Organization (WHO) – prevalence by 2025 of at least 50% nationwide. The Global Burden of Disease, the annual comprehensive health study, attributed 169,000 child deaths to lack of breastfeeding in 2017, more than half of them in sub-Saharan Africa. Moreover, according to the WHO, increasing breastfeeding to near-universal levels could save more than 800,000 lives every year, the majority being children under 6 months.

The paper examines breastfeeding prevalence down to the level of individual districts and municipalities and compares progress among 49 African nations. The paper is accompanied by an interactive visualization tool that allows users to compare prevalence of exclusive breastfeeding within and across countries, look at the rate of change over time, and see the probability of meeting WHO’s goal by 2025.

The value of exclusive breastfeeding of children cannot be over-emphasized.

“Breastfeeding is an unparalleled source of nutrition for newborns and infants, no matter where they are born. If we are serious about ensuring that every infant is offered a healthy start in life, we need to know who isn’t being reached with the support they need to breastfeed,” said Dr. Ellen Piwoz of the Bill & Melinda Gates Foundation. “By illustrating where exclusive breastfeeding rates are falling behind, these maps are a powerful tool to help policymakers and practitioners examine and act on disparities within their countries.”