Next time you’re craving something sweet, go for dark chocolate.

Scientists have found flavanols — antioxidants found in cocoa — can keep your heart healthy by lowering your blood pressure.

They do so by keeping blood vessel walls elastic, allowing blood to flow through the body more easily.

Milk chocolate still probably isn’t a good idea because it is high in sugar and can contain as little as 25 per cent cocoa.

But dark chocolate can be up to 90 per cent in strength.

A study by the University of Surrey found people who took cocoa supplements had lower blood pressure and stretchier blood vessels within three hours.

The pills had as many flavanols as about half a kilogram of dark chocolate — which is normally sold in 100g bars. 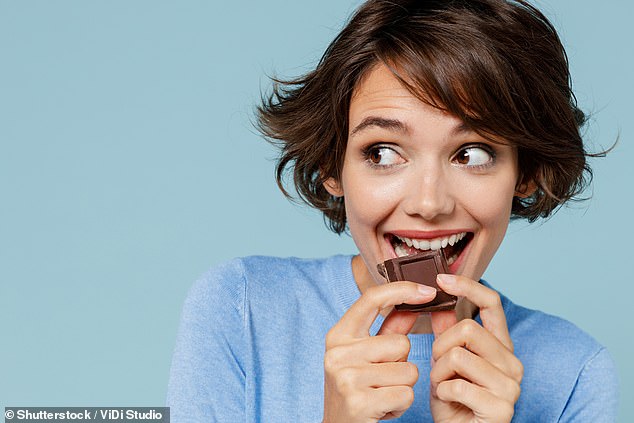 They are found in many plant-based foods and drinks, such as tea, red wine, blueberries, apples, pears, cherries and peanuts.

They are particularly abundant in the seeds of the cacao tree — cacao beans.

Flavanols in cocoa have been shown to help lower blood pressure, improve blood flow to the brain and heart, prevent blood clots, and fight cell damage.

Lead researcher Professor Christian Heiss, a cardiologist, said: ‘The positive impact cocoa flavanols have on our cardiovascular system is undeniable.’

He said that while his study used a lot of flavanols, dark chocolate still has significant amounts.

Around a third of people in the UK have high blood pressure, which puts them at a higher risk of heart attacks and strokes.

In the latest study, 11 healthy adults consumed a cocoa capsule or placebo on alternating days for nearly a fortnight while they went about their daily life.

Participants wore a blood pressure monitor on their arm and a finger clip which measured how stiff their arteries were.

Their blood pressure was lower and their arteries looser on the days they took the flavanols – even up to eight hours later.

Crucially, the supplements did not lower blood pressure on days when it was already low.

Professor Heiss said this could give it an edge over current medications.

‘What we have found indicates that cocoa flavanols only decrease blood pressure if it is elevated.’

The research was published in the journal Frontiers in Nutrition.