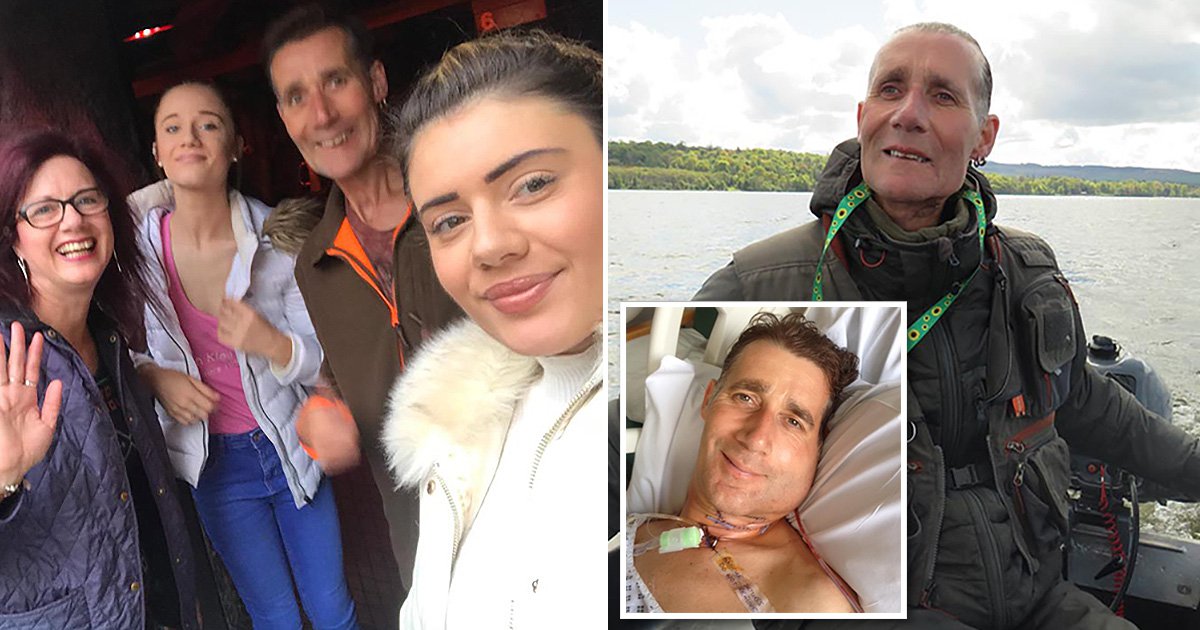 When Mick Stockwell noticed a painful peasized lump in his mouth, he thought it was just an abcess.

When the dad-of-two eventually went to the doctor, he was referred to the hospital and was eventually given the shocking news he had adeno cystic carcinoma – an aggressive cancer of the glandular tissues.

The 51-year-old went on to have his tongue cut out and rebuilt with a graft from his leg.

But sadly, despite extensive treatment doctors told him it had spread to his lungs four years after his diagnosis.

Given three years to live in 2017, this summer he wants to make memories with his wife-of-20-years, Linda, 54, a personal assistant, and daughters Jade, 26, a banking programme manager and Phoebe, 21, a nursery worker, who will be making him a granddad later this year.

Thanks to £7,000 of donations from strangers, he has already enjoyed a once-in-a-lifetime fishing trip in the Scottish Highlands with his family.

The former mechanical site manager, of North Fambridge, Essex, said: ‘I was rarely without a rod or a pint in my hand!’

Mick first noticed the lump in July 2013 but with a family holiday on the cards in August, he planned to see his GP when he got back.

After looking at the lump, his doctor prescribed antibiotics and referred him for a scan at Southend University Hospital where, in the December, medics performed a biopsy on the growth.

Initially, his appointment was set for January but when the results came back, it was moved forward to New Year’s Eve and the couple were horrified to learn his tumour was malignant.

Mick was a former social smoker as a young man but he gave up for good in the 1990s -going cold turkey and winning £500 in a bet with a friend and spending the money on toys for his young daughters.

He worried this had led to the cancer but doctors said that smoking did not play a role.

Just weeks after diagnosis, on February 4, 2014, Mick had a 10-hour operation at Broomfield Hospital in nearby Chelmsford, to remove the lump from beneath his tongue, on what is known as the lingual frenulum – a fold of mucus membrane under the centre of the organ.

The operation entailed dissecting and peeling back his neck for doctors to assess whether the cancer had spread.

Surgeons also removed lymph nodes and his salivary glands, as well as putting in a tracheotomy – a hole in his throat through which he could breathe.

Spending several days in intensive care, only able to communicate by writing on Phoebe’s whiteboard, he said: ‘After the surgery, I was numb everywhere – my mouth felt dead as a doornail.’

Once he was well enough to go home, he started to get back to normal life and had hospital scans every three months to check for any reoccurence.

But sadly in 2015, he developed pain in the same place.

He said: ‘It was pain like before and I just knew something was wrong.’

Sent for an MRI in April 2016, Mick received devastating news on May 6 at his multidisciplinary team meeting, when he and Linda were told the tumour had recurred and was of a significant size.

Four centimetres long and sausage shaped, it had grown beneath the old tumour.

Mick said: ‘At that point, I couldn’t believe what I was being told was real.’

On June 1, an even more serious 12-hour operation saw the same area of his mouth removed, this time with surgeons making even deeper incisions to cut away more tissue.

When his family went to see him, his wife said he look ‘Frankenstein’s monster,’ with a swollen head like a football and 100 staples in his neck and Phoebe was so shocked she physically collapsed.

But days later, he was told he needed another operation, this time to remove the tongue – a procedure called a glossectomy – and then attach tissue from his leg known as a ‘bolus’ or a fake tongue.

Doctors warned he may never eat or speak again, but when they installed a voice box, he pulled it out, insisting that he was going to speak – which he eventually did after around seven months.

Two weeks after surgery, he was discharged from hospital but had to come back and forth for treatment.

He needed nine teeth extracted before radiotherapy could start.

Then, following six weeks of intensive daily radiotherapy on his neck, he could only drink sips of water and was given prescription milkshakes through a feeding tube to his stomach – resulting in his weight plunging by 20kg.

‘That was probably the lowest point for me,’ Mick confessed.

‘I couldn’t eat, I couldn’t do anything with my mouth. I was forcing myself to drink and desperately trying to be able to speak again.’

His skin graft started growing thick black leg hair inside his mouth – which to Mick and his family was horrific, but delighted doctors as it showed the tissue was living.

Eventually, he was able to have laser therapy for around a year to destroy it at the root.

Mick found occasions like Christmas torturous – and even went as far as getting rid of the family’s dining table.

‘I was just faced with tasteless supplements – and I would avoid mealtimes by taking the dogs for a walk,’ he said.

‘The table was a constant reminder of the meals I couldn’t have, so one day, I sold it to a mate.’

After dentists rebuilt his missing teeth, Mick slowly built up his strength, chewing tiny bits until he could finally swallow a plate of soft food – often taking up to an hour.

Linda gave up work to care for Mick and the family threw themselves into fundraising – with Phoebe, Jade and Linda taking part in sponsored races and skydives in aid of Macmillan Cancer Research and the Farleigh Hospice in Chelmsford.

Despite all the treatment, on July 28, 2017, Mick was told the cancer was now metastatic, and had spread to his lungs – meaning there was no more treatment and no hope of a cure.

He said: ‘We knew it was bad news when my consultant plastic surgeon burst into tears, telling us she was sorry to say it had spread to my lungs. My life expectancy then was about three years.’

Mick took medical retirement, cashed in his pension and focused on spending time with his family.

Living with Mick’s illness for the last eight years has taken a toll on the whole family.

Phoebe lost lots of weight, as she struggled to eat when her dad could not. She had a mental breakdown in her late teens and was hospitalised with major depressive disorder weeks before her GCSEs.

She went on to pass her exams with flying colours – even receiving the National Citizens’ Service (NCS) award through her school and winning third place in an Essex-wide poetry competition with an ode about her and her dad’s experiences.

Linda said: ‘Phoebe’s illness was brought on by the huge amount of stress.

‘She couldn’t walk. Mick helped her to relearn how to walk. She was drinking out of a baby beaker.

‘But she is better now. She is pregnant and we are due our first grandchild in July.’

In mid-May, they went on the two-week fishing holiday in Scotland funded by strangers.

Launching a GoFundMe page hoping to raise just under £2,000, when they raised almost £7,000, Linda was astonished.

She said: ‘We had an absolutely wonderful holiday and we are so grateful to everyone who donated on the Go Fund Me page. We cherished every single day and made the most of every moment.

‘We are planning a small garden event in the next few weeks, with tea, wine, beer and cakes for everyone who donated, so we can share our fantastic memories with them and show them how their kind, generous donations were spent.’

They are still raising money to help them make as many memories as possible this summer.