Clinical trials into a potential heart drug have been halted due to fears over Brexit, it has been reported.

US-based research firm Recardio was due to begin a study of the drug dutogliptin on patients in Exeter, Leeds and Clydebank.

However, it has now suspended the UK arm of the trial over concerns about how new medicines will be approved after Brexit, the BBC reported.

The Government today said it is ‘confident’ Britain will still be able to deliver the ‘best possible environment’ for clinical trials after Brexit. 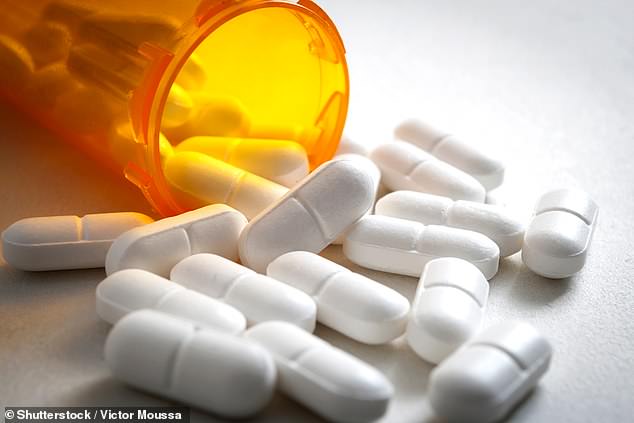 US-based research firm Recardio was due to begin a study of the drug dutogliptin on patients in Exeter, Leeds and Clydebank (stock)

Britain’s future after leaving the EU remains uncertain, as Prime Minister Theresa May continues to work towards a deal with the bloc.

Recardio’s trial is also running in hospitals in Poland, Austria, Belgium, Bulgaria, Hungary, the Netherlands, Poland and the US.

New drugs intended for use in the EU are evaluated by the European Medicines Agency (EMA), based in London.

The EMA is seeking to relocate to new headquarters in a different EU country after Brexit.

A spokeswoman for the Department of Health said: ‘We are confident of reaching a deal with the EU that benefits patients and continues to deliver the best possible environment in which to support clinical trials.

WHAT WILL A NO DEAL BREXIT DO TO HEALTH SERVICES IN BRITAIN?

In a new briefing paper, the British Medical Association warns, in the worst case scenario, a no deal Brexit could:

• Cause real disruption for almost a million patients receiving treatment for rare diseases as the UK would be excluded from the European Rare Disease Network;

• Cause delays in diagnosis and treatment for cancer patients because the UK would have to source important radioisotopes from outside of EURATOM;

• End reciprocal healthcare agreements which could disrupt patient care and increase insurance costs. If 190,000 UK state pensioners currently signed up to the S1 scheme and living within the EU return to the UK it could cost the health services between £500 million and £1 billion per year;

• Weaken the UK’s response to pandemics and increase the chances of diseases spreading as we lose partnerships with key EU bodies, such as the European Centre for Disease Prevention and Control;

• Risk the return of a hard border between Northern Ireland and the Republic of Ireland which could see doctors leaving the profession and patients having to travel miles to receive care;

• See fewer doctors and other medical staff, at a time when there are already huge shortages of these roles, due to uncertainty over future immigration status and confusion around the mutual recognition of medical qualifications across the EU.

‘We want to ensure that patients in the UK and across the EU are still able to access the most innovative and effective medicines.’

Recardio’s founder and president, Dr Roman Schenk, told the BBC that uncertainty over Brexit had created a ‘very difficult’ situation for his company.

The Golden Jubilee National Hospital, near Glasgow, was told the position of Recardio, based in California, could change ‘when the regulatory situation has clarity’, PharmaPhorum reports.

The UK Clinical Trials Gateway states the firm is ‘not recruiting’ participants for the double-blind phase two study in the UK – despite it supposed to having been started back in April.

The trial is hoped to uncover that dutogliptin can be used safely alongside filgrastim to repair heart tissue in heart attack patients.

Britain’s deadline to leave the EU is March 2019, however fears have mounted in recent weeks that it will crash out of the bloc without a deal.

If the EU and Britain fail to reach terms, it could scupper plans of a 21-month transition period after officially leaving the bloc.

It comes after it was reported last month the NHS will be franchised around the world under controversial plans to raise £7 billion in the aftermath of Brexit.

Officials said they hoped the money-making move will allow trusts and NHS boards to pump their profits directly into swamped frontline services.

Around 4.6 million people in the country are thought to have diabetes and many of them rely on insulin to stay healthy.

Danish healthcare company Novo Nordisk supplies more than half of the UK’s insulin and revealed it’s importing enough of the vital medication to last four months.

Leading medics have repeatedly warned a no deal Brexit could be ‘catastrophic’ for the NHS.

The British Medical Association, the union for doctors, in August said failing to agree trade terms could deepen the NHS workforce crisis and disrupt millions of patients.

Countdown to Brexit: The key milestones on the road to exit day 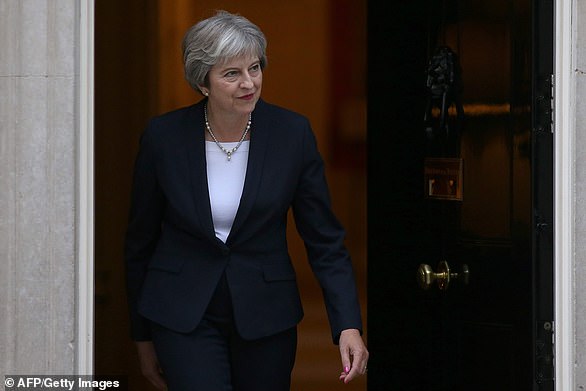 Next round of negotiations, September 21 to mid-October

After the Salzburg summit meltdown, the coming month of detailed talks will be among the most crucial so far.

The UK and EU negotiators are scrambling to break the deadlock so they can frame a ‘political declaration’ on the future relationship and finalise the withdrawal treaty.

How far they get in drafting the documents – and how much is left to EU leaders themselves – will determine when, if at all, an agreement can be struck.

The political declaration will explain in non-legal language what the two sides plans to agree in the final treaty.

A political declaration was used in December 2017 to outline the proposed transition deal and the £39billion divorce bill agreed by the UK. This is what is currently being turned into legal language for the withdrawal treaty. 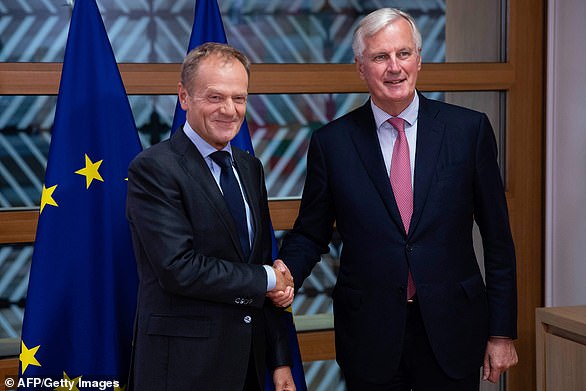 EU Negotiator Michel Barnier (right in Brussels last week) maybe given new guidelines this week within which to strike a deal. EU Council President Donald Tusk (left) has said the meeting must reach a ‘common view’ on the shape of the future UK-EU relationship

October’s EU summit has long been pencilled in as the opportunity for EU leaders to agree the withdrawal treaty on the terms of exit and a political declaration on the future relationship between the UK and EU.

If a deal can be struck in October, it leaves plenty of time for it to be agreed in the UK and ratified in the EU, paving the way for an orderly Brexit in March.

A deal is not expected to be finalised at this summit but both sides will hope for significant progress – even if the summit is used to set out the dividing lines one last time.

An emergency summit in November is now widely expected. If it happens, there will be acute political pressure to finalise both the withdrawal treaty and political declaration – if nothing else to allow the EU to return to other business.

Expect a high stakes meeting and a late night finish. Failure will see both sides walking up to the brink of a chaotic exit and peering over the edge. 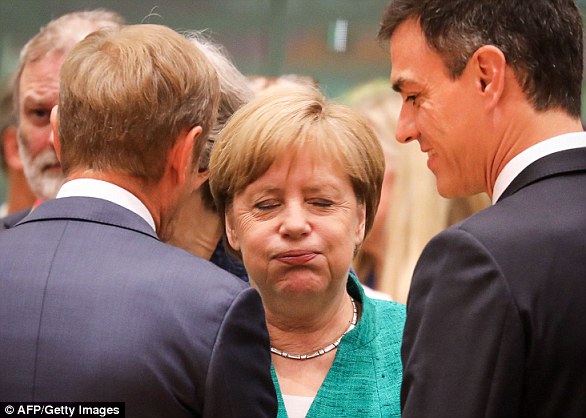 Given the need to ratify the deal, the December summit is the last chance to strike a deal. Brexit is not supposed to be on the agenda: if the talks reach this summit there has been a major breakdown.

The EU does infamously find a way to agreement at the 11th hour and if Brexit talks are still live in December, many will hope for a fudge that can get both sides over the line.

Last year, talks on the outline divorce deal were pushed to December and a deal was  – just – reached.

The so-called ‘meaningful vote’ in the UK Parliament, January 2019

Assuming there is a withdrawal treaty and political declaration, the next stage is for the action is in the UK Parliament.

Mrs May promised Tory Remain rebels a ‘meaningful’ vote on the final deal in both the Commons and Lords.

This is expected to be a simple yes or no vote on what she has negotiated – so in theory a detailed withdrawal treaty, spelling out the divorce bill and other issues such as citizens’ rights, and the political declaration on the future relationship.

Linking the two will be a high stakes moment. Brexiteers do not want to sign off the divorce bill without a trade deal and Remainers are reluctant to vote for a blind Brexit.

But the Prime Minister has made clear it is deal or no deal: accept what she has negotiated or leave Britain crashing out on March 29, 2019 with no agreement in place.

If the meaningful vote is passed, there will be a series of further votes as the withdrawal treaty is written into British law. 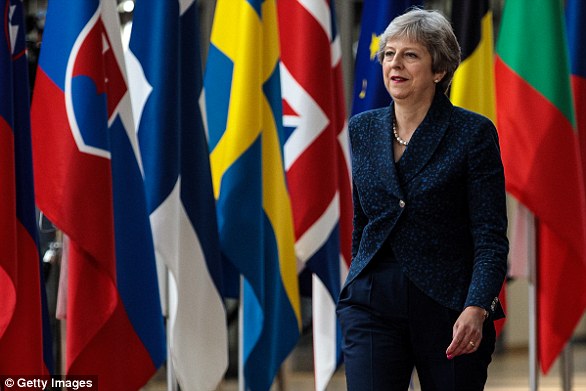 The Prime Minister (pictured at the EU Council in June) has made clear it is deal or no deal: accept what she has negotiated or leave Britain crashing out on March 29, 2019 with no agreement in place

Ratification in the EU, February 2019

After the meaningful vote in the UK, the EU will have to ratify the agreement. This is a two stage process.

National parliaments in all 27 countries have to vote on the deal. It does not need to pass everywhere but must be carried in at least 20 of the 27 countries, with Yes votes covering at least 65 per cent of the EU population.

The European Parliament must also vote in favour of the deal. It has a representative in the talks, Guy Verhofstadt, who has repeatedly warned the deal must serve the EU’s interests.

In practice, once the leaders of the 27 member states have agreed a deal, ratification on the EU side should be assured.

At 11pm on March 29, 2019, Britain will cease to be a member of the European Union, two years after triggering Article 50 and almost three years after the referendum.

Exit happens at 11pm because it must happen on EU time.

If the transition deal is in place, little will change immediately – people will travel in the same way as today and goods will cross the border normally.

Negotiations will continue to turn the political agreement on the future partnership into legal text that will eventually become a second treaty. Both sides will build new customs and immigration controls in line with what this says.

If there is no deal, there is little clarity on what will happen. Britain has outlined contingencies for a catastrophic breakdown in transport and goods networks; in practice short term, small side deals will be likely be rapidly negotiated to avert the worst consequences.