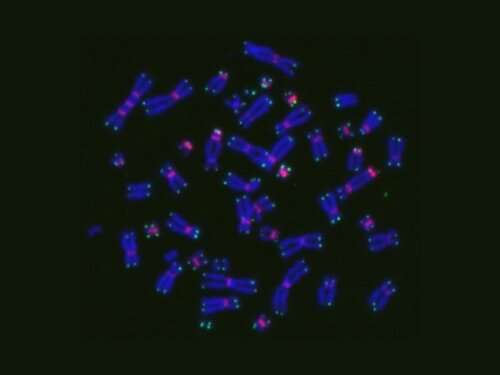 “Chemoradiotherapy is the standard treatment for various types of cancer. However, while its usefulness is recognized, adverse events due to radiotherapy are of great concern,” the study’s lead author Nobuki Imano, assistant professor at Hiroshima University’s Graduate School of Biomedical and Health Sciences, explained.

Peripheral blood lymphocytes (PBL), a type of white blood cell used to assess immune function, were taken from patients just before and 15 minutes after each treatment. PBL samples were also taken at four weeks and six months after patients completed their prescribed chemoradiotherapy treatment.

The researchers counted the number of misshapen dicentric chromosomes, which formed two centromeres, and O-shaped ring chromosomes to evaluate the number of chromosomal aberrations. Meanwhile, they tallied the γ-H2AX foci—a marker for DNA damage—per cell to assess DNA double-strand breaks.

They found no significant increase in the number of γ-H2AX foci during chemoradiotherapy in the patients. However, they discovered that chromosome aberrations were higher in patients who showed severe side effects (overreactor group) than in those who experienced lower grade toxicities (non-overreactor group).

“We found that the number of chromosomal aberrations increased during chemoradiotherapy and reached 1.04 per metaphase by the commonly used chemoradiotherapy dose of 50–60 Gy for cancer treatment, and gradually decreased after chemoradiotherapy to approximately 60% in six months,” the researchers said in their findings published in the March 2021 issue of the journal Radiation Research.

This study is the first they know of so far to report the relationship between acute toxicity and chromosomal aberrations in radiotherapy using in vivo data.

Imano said their study could lead to personalized radiotherapy treatments in the future.