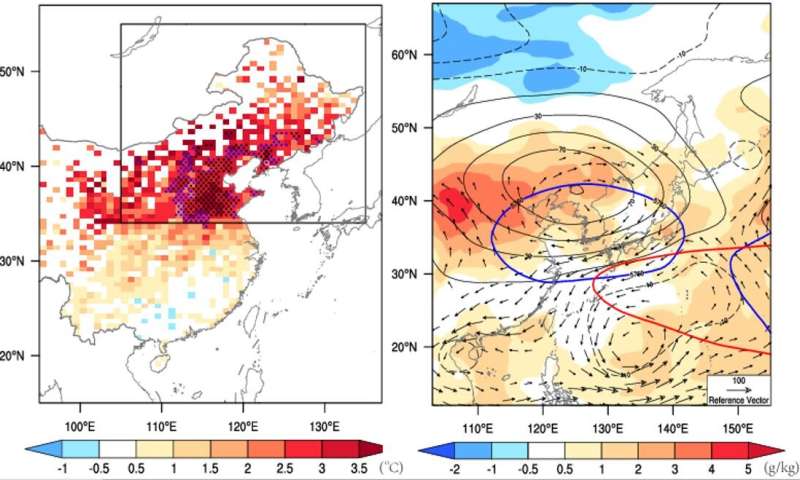 Current health issues in China could be dwarfed by the future impacts of severe and frequent heatwaves caused by climate change, scientists are warning.

A study by the University of Reading, University of Edinburgh, the Met Office and several Chinese institutions, calculated that 30-day spells of deadly overnight heat, like the one that killed and hospitalised many people in north-east China in 2018, have already gone from being one-in-500-year events to one-in-60-year events since pre-industrial times.

They also found that extreme daytime heat, as well as extreme rainfall, is due to become more common in the country in future as humans continue to emit greenhouse gases into the atmosphere.

Dr. Buwen Dong, co-author and climate scientist at the University of Reading and NCAS, said: “People are already suffering from more frequent extreme heat in China, and this will only get more common in future due to climate change.

“It is particularly concerning to see high night-time temperatures becoming a growing threat. This gives no respite to people struggling to cope with searing daytime heat and can lead to deadly heatstroke, particularly for vulnerable people. Better strategies for adapting and coping with rising temperatures are vital to save lives.”

In two studies published by the American Meteorological Society, scientists looked at how common such hot conditions in north-east China and wet conditions in central western China have become, and will become in future, due to human-induced climate change.

They looked at almost 50 million daily temperature records captured at 2,400 weather station across China between 1961 and 2018, along with data from other sources.

The scientists also found that climate change has made rainfall more likely to occur in severe bursts in central western China. Using climate models, they calculated extreme downpours have become 1.5 times more likely since pre-industrial times, while the likelihood of persistent heavy rainfall has reduced by 47%.

Professor Elizabeth Robinson, an environmental economist at the University of Reading, who was not part of this study but addresses the vulnerability of people to climate change worldwide in the latest Lancet Countdown report, said: “The current health emergency in China is sadly causing many deaths and this report shows how climate change could also cause serious health emergencies in the region in the future.