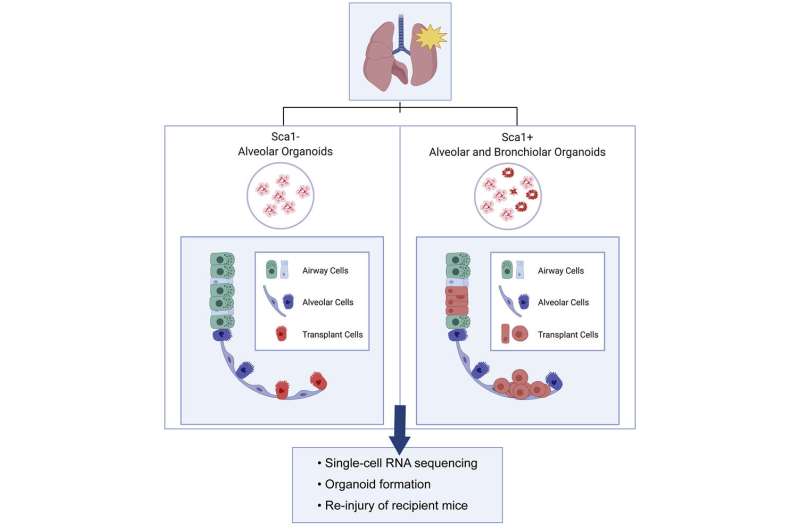 Many serious pulmonary diseases, including genetic lung diseases, lack an effective treatment other than the most extreme: lung transplant. A team at Boston Children’s Hospital envisions a much better option: cell therapy, using lung stem cells created from patients’ own cells to repair or replace damaged lung tissue. For patients with genetic lung diseases, the cells could even be genetically corrected before the treatment.

Benjamin Raby, MD, MPH, chief of the Division of Pulmonary Medicine at Boston Children’s, is working to make this vision a reality, together with pulmonologist Ruobing Wang, MD, and collaborators Carla Kim, Ph.D., Thorsten Schlager, Ph.D., and George Daley, MD, Ph.D., of the Stem Cell Program.

“Cell therapy would avoid the need for major surgery, and we wouldn’t have to worry about donors, matches, infections, and other things we worry about with a transplant,” says Raby. “Patients could receive the cells through a bronchoscopy or perhaps an inhaled aerosol. Ideally, they would not need long-term immunosuppression to maintain these transplants.”

While pulmonary cell therapy is still years from reality, Kim’s team in the Stem Cell Program recently provided a scientific proof-of-concept in mice.

Led by Sharon Louie, Ph.D., Aaron Moye, Ph.D., and Irene Wong, the team isolated two types of stem-like cells from the lungs of mice—alveolar cells and multipotent progenitor cells. From these, they created lung organoids, miniature alveoli, and bronchi. They then transplanted cells from these organoids into mice with injured or diseased lungs.

Delivered through the airway, the organoid cells successfully engrafted in the lung. The alveolar cells found homes in the alveoli, while the multipotent cells incorporated into both the airway and alveolar regions. Based on single-cell RNA sequencing studies, the transplanted cells shared gene expression patterns with true alveolar and airway cells, suggesting they took on the same functions. When the lung was re-injured, the transplanted cells proliferated.

“When you put these cells back in the lung, they look very similar to their native counterparts, and look and act like lung progenitors,” says Kim, who is also a professor of Genetics at Harvard Medical School. “And when you take them out, they can grow again in culture and produce more organoids—indicating they still have progenitor cell activity. That’s important if you want to deliver a lasting effect.”

The road to first-in-human studies

The work, published recently in Cell Reports, also provided early hints that the cells reversed disease. In one injury model, healthy tissue replaced some of the fibrotic tissue.

“Our next step is to confirm that the cells we engraft improve or restore lung function,” says Kim. This work will pull in Bao Lu, Ph.D., a researcher in Pulmonary Medicine who has a system for doing pulmonary function tests in mice.

If function is restored in mouse models, the ultimate goal would be to launch first-in-human studies. Kim, Raby, and colleagues are collecting banked tissue samples from patients with cystic fibrosis, other genetic lung diseases, or lung damage from other causes. Kim has already built organoids from some of these samples.