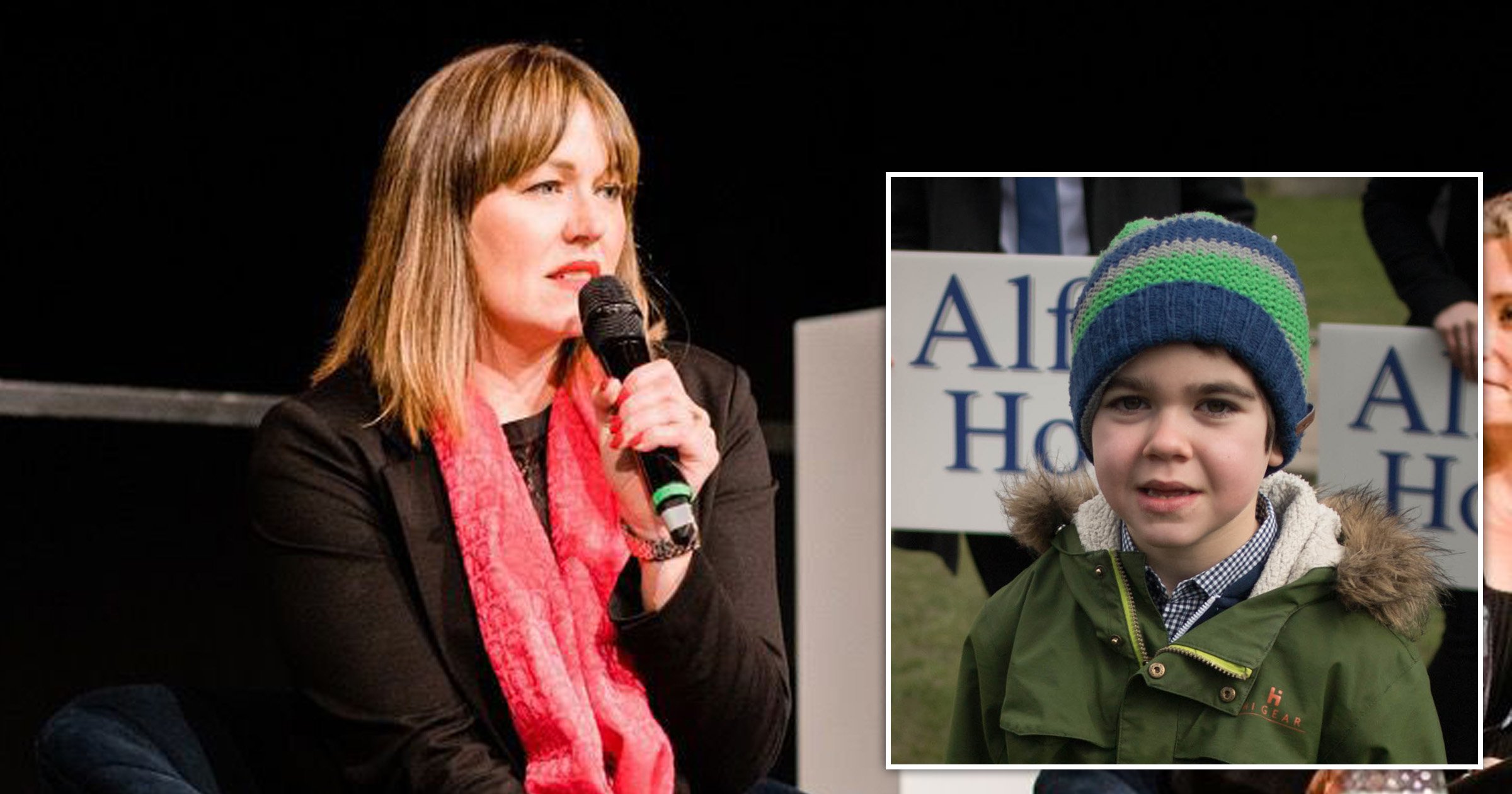 ‘Thanks to CBD, my son is coming up to nearly 1,000 days without a seizure,’ Hannah Deacon tells Metro.co.uk.

Hannah, 43, is an accidental campaigner. She had no choice – she had to fight for the life of her son.

Soon, he was having as many as 150 attacks a week.

Doctors were at a loss, with no clue what was causing the seizures that left the young boy hospitalised 48 times in a year.

Finally, at the age of five, Alfie was diagnosed with PCDH19; a severe refractory epilepsy condition.

‘It’s genetic,’ Hannah tells us. ‘But I don’t have it and nor does his dad, so it’s spontaneous reproduction.

‘At the time we were told there were only seven boys in the world with this condition, so doctors said there was nothing more we could do other than what we were doing, which was to fire-fight.

‘When he got ill we needed to get him into hospital and give him lots of steroids and antiepileptics, which did stop his seizures for maybe a couple of days, but gave him very severe side effects.

‘He would have psychotic events, violent events, he couldn’t sleep, he’d be crying and screaming.

‘It was just awful to watch him go through it, so I decided to try to find a way of treating him in a more natural way.’

Because the diagnosis was so rare, doctors couldn’t offer much in the way of advice for further treatment – because they were already doing what they could.

Hannah had been working in travel marketing and was also a trainee hair dresser before Alfie was born, but soon had to give this all up to look after her child.

She said: ‘Obviously when Alfie was born and he had seizures at eight months I was a full-time carer. I wasn’t able to work.

Hannah did some research and spoke to families in America and Canada who were treating children with cannabis alongside antiepileptics, but she couldn’t try it legally in the UK.

So in 2017 she moved her family, which includes partner Drew Dingley and daughter Annie, eight, to Holland, just to try the alternative treatment.

Over the course of six months, Alfie’s recovery was incredible.

Hannah says: ‘We worked with a paediatric neurologist who prescribed CBD low THC oil for Alfie, which worked incredibly well.

‘It definitely isn’t something that works right away, it wouldn’t with something so severe as epilepsy.

‘But what we see now is Alfie coming up to nearly 1,000 days with no seizures.’

Holland was never meant to be a permanent move.

When Hannah and her family returned to the UK in February 2018, the mum was determined to continue her son’s treatment.

The parents met with Prime Minister Theresa May and presented her with a petition. As a result, Alfie was granted the UK’s first and only medical cannabis license.

Hannah finally received the license on the June 19, 2018 and Alfie has had an NHS-funded prescription for the medicine he was using in Holland ever since.

On November 1, 2018, it became legal for any doctor on the UK’s specialist register to prescribe any medical cannabis product they believe is necessary to treat a patient.

And yet, Alfie remains one of just three children in the UK with an NHS-funded prescription for his whole plant cannabis treatment.

Prescriptions remain challenging to get and some have to resort to paying for private healthcare to access cannabis treatment – or buy illegal marijuana for relief.

This is why, despite receiving Alfie’s license, Hannah is still campaigning for doctors to educate themselves on the benefits of CBD and to prescribe it to patients.

She says: ‘It’s an amazing thing to have achieved, but I think it’s very sad that it’s not helped more people, which it should have.

‘Alfie is able to go to school now and he is starting to understand the importance of using language to ask questions and interact with his peers. He is starting to read, to tell the time and make friends.

‘Before, when he was ill, he had no friends, he couldn’t develop a normal relationship even with his sister. Now all of those things have changed.

‘He still has days that are tough but actually he’s got the most normal life he could possibly have and all I see is him learning and creating and being present in his life and it’s amazing to see.

‘It’s something we never thought possible and why I’m so passionate about it is because there are thousands of children across the country who are that poorly but might not need to be if they could access this medicine funded on the NHS rather than having to fundraise privately to get access.

‘I think when you’ve got a very sick child, it’s wholly wrong to then ask a family to fundraise to pay for medicine that works.’

It’s estimated that 1.4 million people in the UK use cannabis illegally for medical purposes and Hannah is a staunch believer in not criminalising those who need it.

But, the issue of legalising marijuana is a complex one and Hannah feels there needs to be a distinction between accessing whole plant cannabis on the NHS and accessing weed legally in general.

Why is prescribing whole plant cannabis still not commonplace?

It’s important to make the distinction that Hannah is campaigning for NHS prescriptions of whole plant cannabis including CBD and THC among other compounds.

In fact, there are around 200 prescriptions for Epidiolex for children with epilepsy.

Hannah’s son is prescribed CBD low THC oil but doctors say there is a lack of evidence to show it’s safe.

Although there have been tens of thousands of trials using real-world evidence and observational trials, NICE say the only evidence that is robust enough is randomised controlled trials, which is a pharmaceutical model of safety.

This is fine when you’re looking at single compounds that are pharmaceutically derived but we’re looking at what’s called a botanical medicine or plant medicine, made up of hundreds of compounds.

While there is some evidence that the use of high THC street cannabis can cause psychosis, a paper by Matthew Hickman said you had to have 29,000 women use high THC cannabis to get one person that would have psychosis and 11,000 men, so it’s very rare.

Because this cannabis is an unlicensed special, a doctor has to take responsibility for prescribing that medicine and this, combined with the stigma that comes with weed, can be off-putting.

NICE said: ‘Our clinical guideline doesn’t make any recommendations about the use of cannabis-based medicines for severe treatment-resistant epilepsy.

‘It does, however, acknowledge the need for more research to build the evidence base for the use of these medicines, and supports NHS England’s call to collect evidence from both randomised controlled trials and observational studies.

‘Until there is clear evidence of the safety and effectiveness of cannabis-based medicinal products, specialist doctors need to consider individual patient circumstances, clinical condition and need, and to weigh up, with the patient or carer, the relative risks and benefits in choosing treatments.

‘It’s also important to point out that even had NICE recommended widespread use of these products, it would not necessarily mean that they would become routinely available on the NHS.

‘This is because the majority of the products are unlicensed and so access will only be available from specialist doctors, supported by local governance systems, and adhering to General Medical Council guidelines of prescribing.’

The NHS was approached for comment on this article, but did not respond.

‘When medical cannabis is available for patients but weed is also legal for adult use, the problem is that doctors will disengage even more because they think well you can go to the dispensary down the road and buy cannabis so you don’t need my intervention,’ says the mum.

‘It will stifle research because companies will think “well, we don’t need to do research now because I can just sell it in a dispensary”.

‘For chronically ill people like Alfie who are mentally impaired, physically impaired and not able to make those clinical decisions for themselves, we must ensure that medical access to cannabinoid medicine is prescribed and the most important thing.

‘We need to get the medical access right first.’

Hannah Deacon wasn’t in the medical field before having Alfie but now has an international reputation as a medical cannabis expert.

Hannah said: ‘I know what I’ve achieved for my son and it really inspires me to help others.

‘But I’ve always been just a mum who was trying to keep her son alive.’