Reversing hair loss is notoriously difficult, but a new study may bring scientists one step closer to solving the hair loss puzzle. 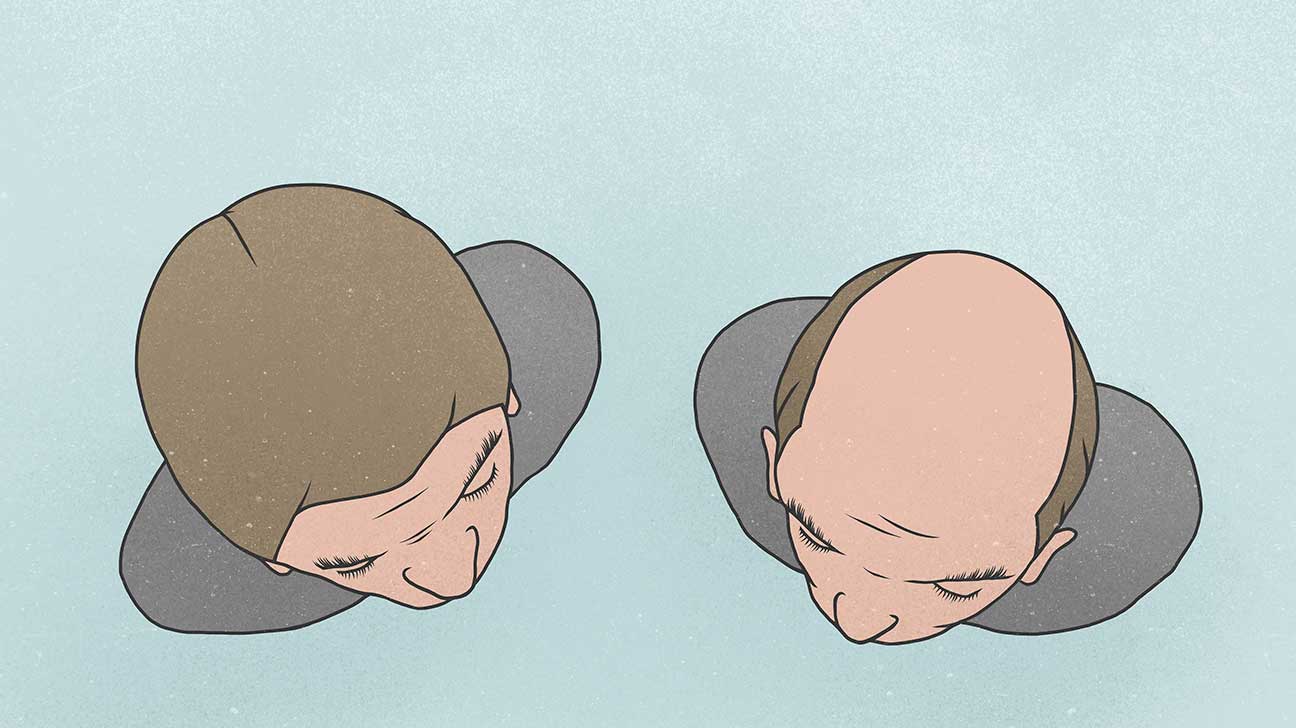 Approximately 88 million men and women experience some degree of hair loss during their lives.

Those eager to reverse a receding hairline can choose from a few solutions. Hair transplants are a costly but permanent option. Topical solutions that promote hair growth, but at inconsistent rates, are another option.

To date, scientists haven’t developed a surefire method to stop hair loss, which is scientifically known as androgenetic alopecia. That term alone provides clues to its illusive cure.

Hair loss is the result of both hormonal and hereditary factors. The truth is, hair loss is still a bit of mystery, says Dr. Edidiong Kaminska. She practices dermatology in Chicago and is a spokesperson for the American Academy of Dermatology.

“There are so many molecular pathways — it’s multifactorial, it’s hereditary. There are a host of factors,” she told Healthline. “That’s why treating hair loss has been complicated and challenging.”

A study released this month may bring scientists one step closer to solving the hair loss puzzle. It involves a drug that’s currently used to treat osteoporosis. One of the side effects of the drug is that it reduces the activity of a protein called SFRP1. This is key because that protein also stops follicles from growing hair.

The researchers from the University of Manchester’s Centre for Dermatology Research uncovered this finding through lab tests. They used samples containing scalp hair follicles from more than 40 male hair-transplant patients. The hair follicles were placed in a medium and treated with the drug. Researchers said that those hair follicles were able to grow again because it suppressed the actions of SFRP1.

The researchers published their findings in the journal PLOS Biology.

Kaminska said it’s exciting to see that the researchers were able to zero in on the protein that stops hair from growing at the follicle.

“This is novel because it blocked that protein, SFRP,” she said. “It’s amazing that they were able to find the specific protein.”

But Kaminska stopped short of calling the findings a cure for baldness. For starters, she said it’s just the first study. Further, it was only conducted in the lab, not on people. There simply isn’t enough thorough research to draw serious conclusions yet about its long-term implications for hair loss.

“I can’t say it’s the magic bullet, but it’s exciting,” she said.

At first the researchers conducted studies using cyclosporine A, an immunosuppressant. One of its side effects is hair growth. That set of testing led them to the SFRP1 protein and the discovery that the protein blocks hair growth. But cyclosporine A has too many side effects to pursue further testing, which is why they set their sights on the osteoporosis drug.

It has few side effects. It should be noted that the scientists did not provide the name of drug in their study.

Study author Nathan Hawkshaw, PhD, told the BBC that the treatment could make a real difference to people who have hair loss.

“The fact that this new agent, which had never even been considered in a hair loss context, promotes human hair growth is exciting because of its translational potential,” he said in a statement.

Why is it so difficult to stop hair loss?

While hair loss has likely been occurring as long as humans have been around, it’s only in the last 40 years that consumers have had access to topical treatments that encourage hair growth.

And these medical options don’t help everyone or treat every type of hair loss.

The most common treatment for hair loss, minoxidil, was introduced to the masses in 1998. The drug is often referred to as Rogaine, one of the most popular name brands on the market.

Despite its popularity and widespread use, scientists aren’t actually sure how minoxidil promotes hair regrowth, but it does. The drug, a topical treatment, was first used to treat ulcers, and hair growth was a side effect. More than 40 percent of people who use minoxidil will see their hair grow back to some degree.

Another option on the market is finasteride, an oral medication, commonly found under the brand name Propecia. Finasteride is an anti-androgen. It was first developed to treat enlarged prostates. In 1997 it was approved to treat hair loss.

Of the two choices, finasteride comes with many more side effects. It’s not approved for use by women, and it can cause birth defects if they become pregnant. People who opt for this treatment also aren’t allowed to give blood.

As Kaminska noted, it’s too soon to tell if this new drug studied will end up being the cure for hair loss that people have been looking for. She said in order for this new theory to really take root, more research will need to be conducted.

Future studies would need to engage in multiple phases of research to figure out how the drug would best be administered and, importantly, what side effects it produces, she added.

“We don’t know what would happen if we put the medication on live humans,” Kaminska said.

Hawkshaw told the BBC that clinical trials would be next in line.

There are many types of other hair loss that can occur. Alopecia areata is when your hair falls out in spots, while alopecia universalis is total body hair loss. Both are considered to be autoimmune disorders.

If these or other types of hair loss occur, it’s important to get an accurate diagnosis, she added.