If Matt Dun could spend every last cent he had on time, he would buy more.

Instead, he is running in a race against time to find the missing pieces of the puzzle that could save children such as his own little girl, Josephine. 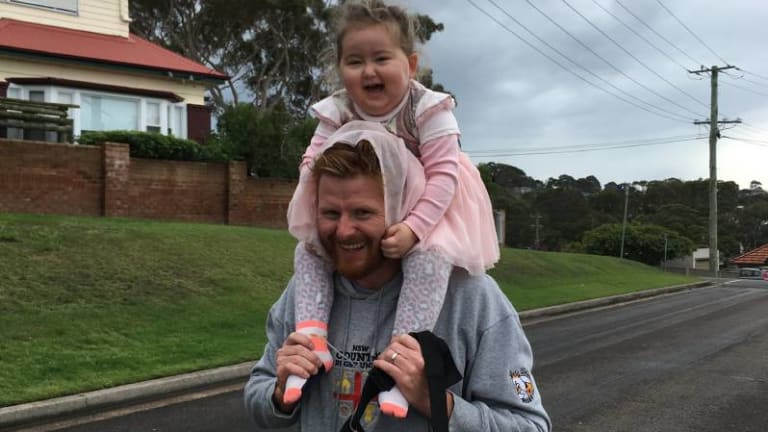 Josephine Dun, 3, shares a moment with her dad, Dr Matt Dun, during her treatment.

The University of Newcastle and Hunter Medical Research Institute (HMRI) biologist has spent almost a decade unearthing vital insights into some of the most devastating types of cancer, including children's cancers.

But in February, his crusade became agonisingly personal when Josephine – now three – was diagnosed with a brain stem cancer called Diffuse Intrinsic Pontine Glioma, or DIPG.

"The average survival is about 10 months," Dr Dun said. "That means that half the kids who get it will live less than that. About 10 per cent of kids with DIPG live for two years, and 1 per cent of kids live for five years."

Dr Dun continues to lead leukaemia research projects, but he has also become driven to use his knowledge and skills to dig deeper into DIPG – a "ferocious", inoperable cancer that almost exclusively affects children. 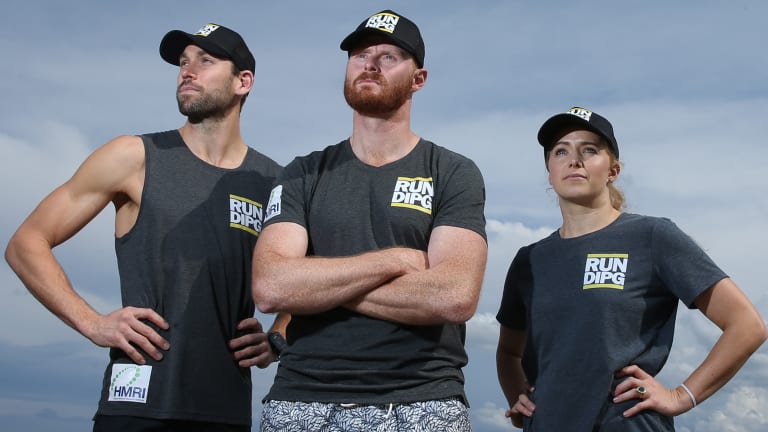 He is "cautiously optimistic" they will be able to translate some of their initial discoveries into clinical trials and treatments for DIPG.

"Whether it is in time for Josephine, time will tell," Dr Dun said. "Clinical trials are still a little while, and a lot of money, away."

Josephine – affectionately known as Josie – was diagnosed with DIPG after she suddenly had trouble walking.

Her treatment, which involved months of radiotherapy under general anaesthetic in Sydney, had been traumatic for their whole family.

"I can't imagine what she's going through in terms of the pain, the symptoms, the loss of mobility, the frustrations, the chemo, the drugs, the nagging of her parents to come into hospital. Being subjected to treatments and needles, and being poked and prodded by different people every five minutes," he said. "For the moment, while she is with us, I feel like at least I can try to look up things and read and try to come up with a strategy that potentially might help.

"At the moment, while we still have her, it gets me out of bed every day."

On Sunday, Dr Dun ran the half marathon in the Lake Macquarie Running Festival as part of his training regime for the Blackmores Sydney Marathon in September.

He hopes to qualify for the Boston Marathon alongside his fundraising team, RUN DIPG, to bring the world's attention to the devastating disease.

"These children are totally innocent," he said. "We still have cancers out there that take our babies, and at the moment, there's nothing we can do about it. We have to work together to end this."

Dr Dun has become part of a community of DIPG parents all suffering the indescribable agony of watching their children battle an illness with "horrendous" survival rates.

Many have come to view him as a champion for the cause.

"This is going to drive me for the rest of my life, to ensure other families have some hope. At the moment, there is none."

DIPG's location in the brain stem makes it difficult to treat.

"The brain stem transports all the signals that help people breathe and swallow and see, so any disruption – be it as small as possible, or as big as a higher grade DIPG, leads to mortality pretty quickly," Dr Dun said. "Which is why surgery – the gold standard for a brain tumour, or any tumour – is not possible.

"So we are simply stuck trying to get drugs into a site that is really important, and a site that doesn't facilitate the transport of drugs from the veins into the tumour.

"That is why we see these terrible survival rates."

Dr Dun said he and his wife Phoebe, a GP who is pregnant with their third child, were grateful for the "amazing" support of their family, friends, and community.

"Everyone feels like they want to help, and they know that, without research dollars, there are no treatments, no cures, no improved wellbeing. So they have taken it upon themselves to do whatever they can, in their own time, to try to help us.

"It is going to help. I am sure what we're doing at HMRI will provide some of the clues of the puzzle that will help kids and their families. I feel that even after six months we have a very strong program focused on a lot of key areas that I think are absolutely critical, and are under-met, in the literature."

Dr Dun's team are looking into early biomarkers of treatment success and failure.

They are trying to discover why and how children get DIPG, and testing therapeutics that focus on the pathways Dr Dun believes is driving it in younger children.

Dr Dun said there had been some "solid research" in the field, such as one study that managed to eradicate DIPG in mice, but caused potentially fatal inflammation.

"My personal Go Fund Me page is to have a fallback plan for when we figure out what may help Josephine," Dr Dun Said.

"This was all brought about by conversations with researchers and clinicians in the US, who suggested if we were to go to the States for any treatment, it would be user-pay.

"One therapy requires a month in hospital. Paying day-by-day, who knows what that could cost?

"Whatever is not used is going to fund a salary, or fund research, back here at HMRI."

Dr Dun said his team has had interest from pharmaceutical companies, researchers and oncologists in Sydney who had come on board to help.

"Now it is about trying to get these preliminary results as strong as possible to move into clinical studies," he said.

"The more money we can get, the more people I can put on it."

Biomedical research may be expensive, but the cost of not doing it is much higher.

"I have just sent a whole batch of DIPG materials for sequencing in Hong Kong, and just to get it to Hong Kong costs us $2000 – that's without the sequencing."