The name is misleading as most people who have it, did not attain it by playing tennis. 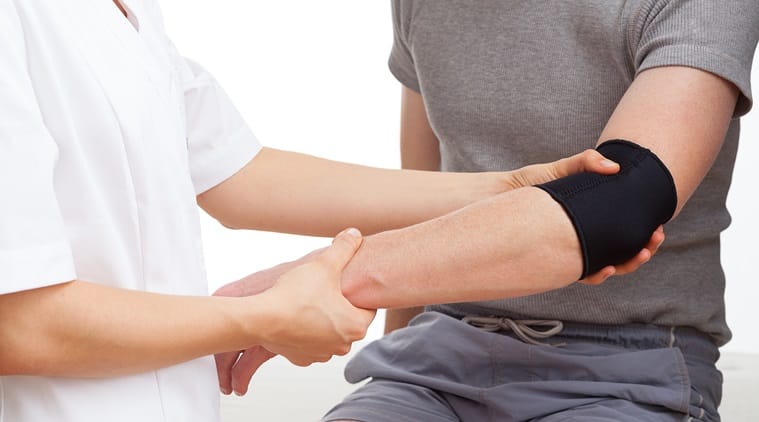 Tennis elbow is a tender condition that occurs when tendons in your elbow are burdened, usually by tedious motions of the arm and wrist. The name is misleading as most people who have it, did not attain it by playing tennis. Technically, it is also known as “Lateral Epicondylitis”, and is usually a result of inflammation just above the elbow joint, on the outer side of the arm. Pain can also be experienced in other areas of the elbow and forearm.

The development of tennis elbow can often be traced to methods of using the forearm muscles which control the hand and wrist movements. These muscles are used to perform actions like straightening the fingers, bending the wrist upwards and rolling the forearm into a palms-up position. Sudden impact or even less force on a repetitive basis can eventually damage the tissues. Without rest and time for the tissue to heal, strained tendons can become permanently weakened and painful. This also weakens the grip strength.

Individuals usually ignore this condition for long periods before seeking medical help mostly because the symptoms are mild and often disappear with rest. Self-medication with locally available pain medication gives satisfactory relief in the early stages, as a result doctor’s counsel is only sought when the pain starts to affect work and becomes intolerable.

“About 1 per cent of cases last more than one year; this occurs often in patients who do not respond positively to non-invasive treatment options. For such patients, steroid injections, Platelet Rich Plasma (PRP) injections locally or rarely, or surgery might be a solution,”said Dr Kaushal Malhan, Director of Orthopaedic Surgery, Fortis Hospital, Mulund. Tasks linked with tennis elbow should be identified and modified to reduce the risk of serious injury. One of the greatest concerns is the overuse of fingers, wrists, and forearms in repetitive motions involving forceful movement, awkward postures, and lack of rest.

Avoid jobs that place extreme force, strain on muscles of the forearm. Timely attention typically reduces the development of a serious problem. The most important steps in treatment include:

*Identifying problematic activities and avoiding them
*Correction of incorrect postures and motions
*Use of ice packs or medication such as oral or topical non-steroidal, anti-inflammatory drugs (NSAIDS), as prescribed by your doctor, to reduce the inflammation or pain
*Exercise regimen such as gentle stretches, eccentric and concentric strengthening
*Physiotherapy to boost the healing process, restore the elbow to its highest level of function, and assist the person in returning to work