And the NHS strikes begin! Up to 100k nurses brave -5C temperatures to demand 19% pay rise on picket lines outside ailing hospitals – amid warnings of MORE and LONGER action in the New Year

Up to 100,000 nurses are taking to picket lines on the first day of the biggest ever nurses strike.

Nurses have walked out at hospitals across England, Wales and Northern Ireland, where only a Christmas Day level of service is being provided.

Millions of patients are expected to be affected by the action, coordinated by the Royal College of Nursing (RCN), with many only finding out at the last minute that their appointment is cancelled.

Health leaders have urged those unwell to still come forward, as the NHS ‘is open’, but admitted that it is ‘concerned about the risk that strikes pose to patients’. 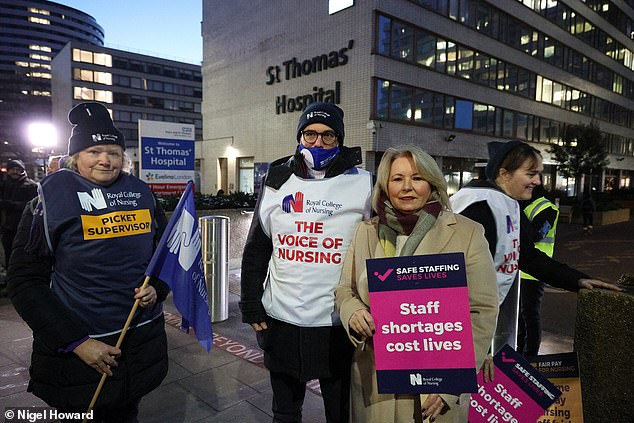 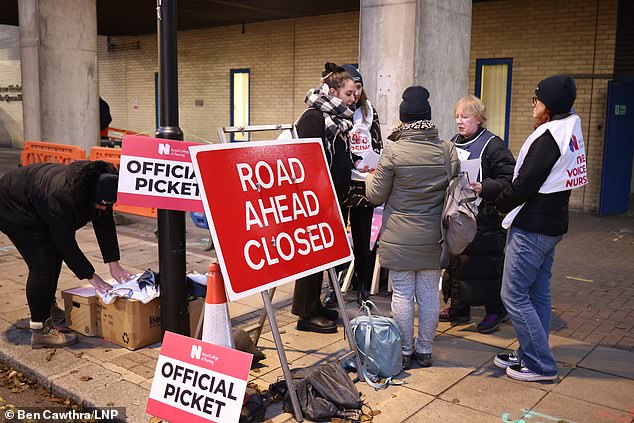 Nurses have walked out at hospitals across England, Wales and Northern Ireland, where only a Christmas Day level of service is being provided. Pictured: NHS Nurses on a picket line at St Mary’s Hospital in Paddington 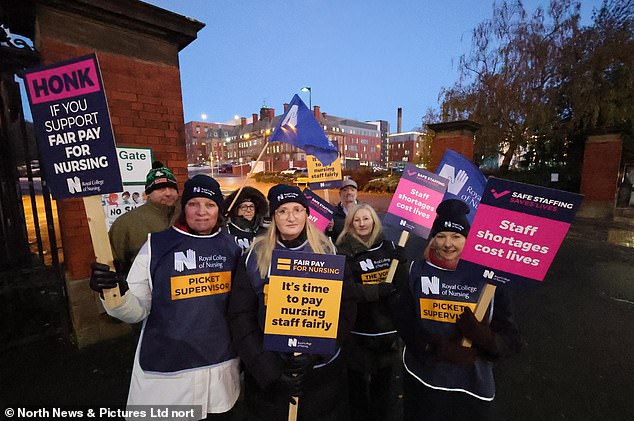 Millions of patients are expected to be affected by the action, coordinated by the Royal College of Nursing, with many only finding out at the last minute that their appointment is cancelled. Pictured: Nurses at Necastle’s Royal Victoria Infirmary RVI hospital form a picket line this morning on the first day of NHS strikes across the country 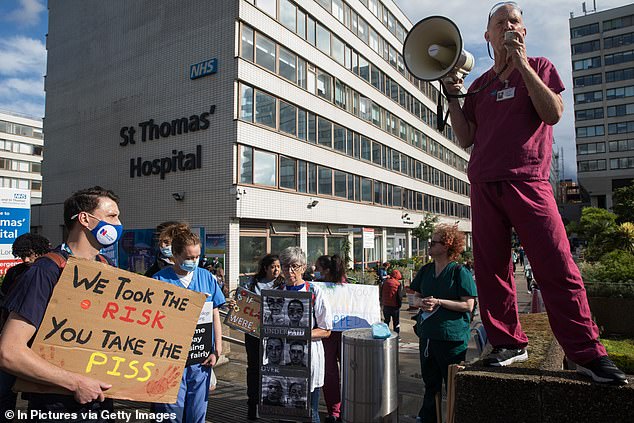 Today’s strike is the first time in members of Royal College of Nursing have walked out of their jobs in history. Pictured: A staff nurse on a speakerphone outside St Thomas’ Hospital in London in July 2021 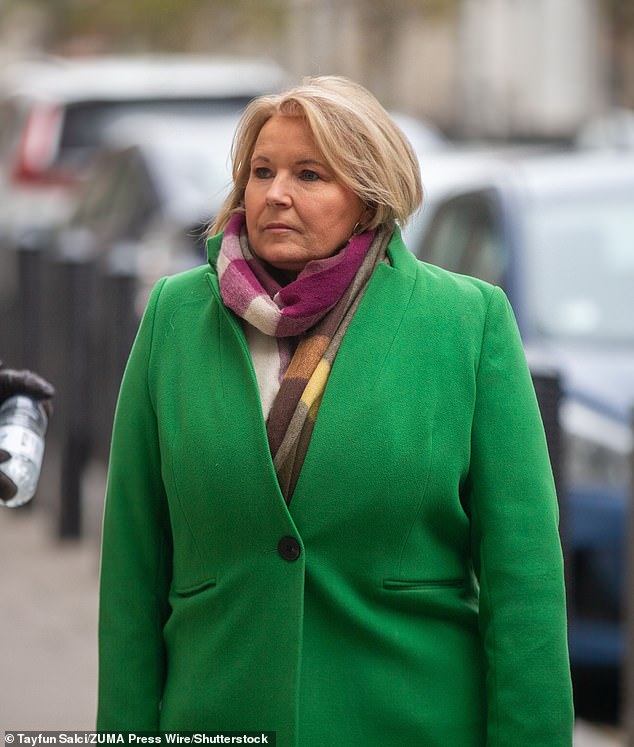 Pat Cullen, general secretary and chief executive of the Royal College of Nursing (pictured) has threatened further strikes if no pay deal is reached 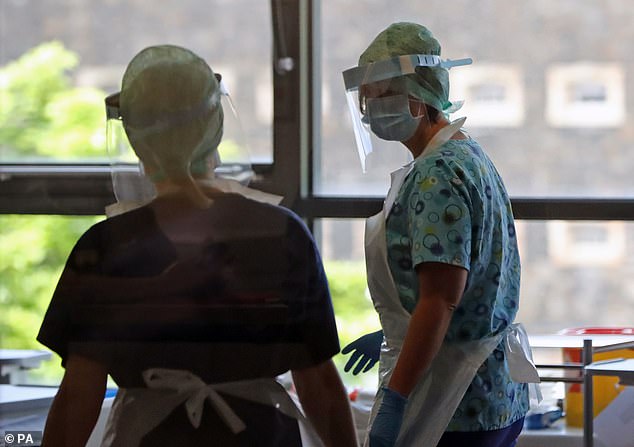 Up to 100,000 nurses begin their first national strike today amid fears that cancer patients could miss out on treatment. Pictured: Nurses in PPE on a hospital ward

A total of 44 trusts across England, Wales and Northern Ireland are having to run a ‘Christmas Day service’, with fears cancer patients could miss out on treatment.

Outside Aintree University Hospital in Liverpool, nurses gathered in freezing temperatures to join the picket line from 7.30am.

Many held placards, with slogans including ‘Short staffing costs lives’ and ‘You clapped for us, now act for us’.

One woman held signs saying ‘F*** the Tories’ and ‘If nurses are out here, there’s something wrong in there’.

Cars beeped their horns as they passed the picket line outside the hospital’s emergency department.

The health service will be running a bank holiday-style service in many areas, though the RCN has said it will still staff chemotherapy, emergency cancer services, dialysis, critical care units, neonatal and paediatric intensive care.

Some areas of mental health, learning disability and autism services are also exempt, while trusts have been told they can request staffing for specific clinical needs.

Ministers say around 70 appointments, procedures and surgeries will be lost in England alone due to the action.

Health leaders warn that ‘real concerns remain’ about the impact of the strike – especially the refusal of the RCN to guarantee delivery of some cancer services.

The RCN and NHS were last night locked in last-minute talks about what exemptions to the industrial action – known as ‘derogations’ – the union is prepared to make to limit the risk to life.

In a letter to NHS leaders, Danny Mortimer, chief executive of NHS Employers, said some aspects of talks with the RCN had been disappointing and warned that ‘unless the Government indicates a willingness to negotiate on pay-related matters, further strike dates will be announced by the RCN for January 2023 and beyond’. 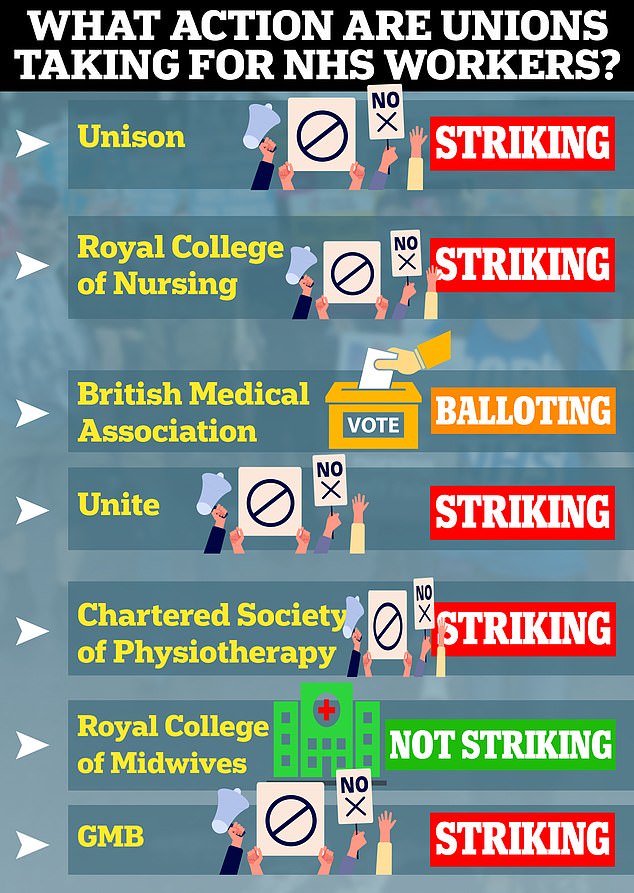 The latest results of the NHS strike ballots are shown here, so far only midwives have failed chosen not to strike 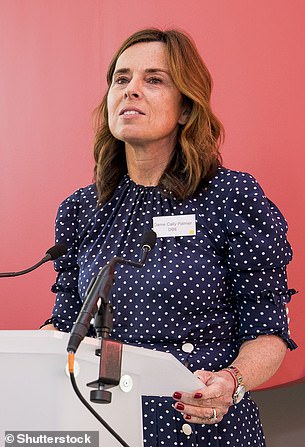 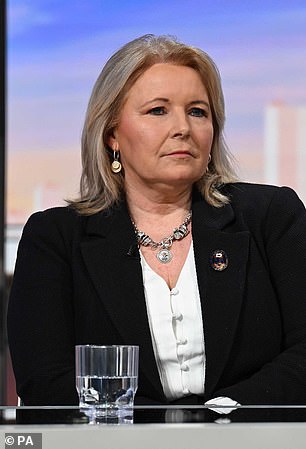 In a letter to RCN general secretary Pat Cullen (right), national cancer director Dame Cally Palmer (left) wrote that she was ‘extremely concerned’ at the impact on cancer patients

Mr Sunak yesterday told MPs the Government had ‘consistently’ met with unions and would ‘continue to back our nurses’.

But at Prime Minister’s Questions, he said: ‘There are millions of people across this country who will have their healthcare disrupted because of the strike.’

It is the first national strike in the RCN’s 106-year history.

Pat Cullen, the college’s chief executive, issued a rallying call to members, urging them to stand united on the picket lines and accusing ministers of ‘turning their back’.

She said: ‘As hard as this is, we won’t turn our backs on our patients – we never have and we never will. And that’s why we’ll be on picket lines, and I will be with you.’

Danny Mortimer, chief executive of NHS Employers, yesterday wrote a letter to NHS leaders in which he described aspects of talks with the RCN as ‘disappointing’.

The letter said: ‘To be clear – real concerns remain. There are areas where we are disappointed that we have not been able to make more progress with the RCN, with the limited national derogations for cancer services a particular area of worry.’

Up to 10,000 patients who would typically be examined for suspected cancer each day may find their appointments disrupted, she added.

In response, the RCN said in a statement: ‘As part of our commitment to safety and patient care, we have already agreed that emergency cancer surgery will go ahead. Where there is another clinically urgent case that will of course happen too.’

All money raised will support the charity’s work on cancers affecting children, so that more under-25s can survive with a good quality of life

The campaign, launched last week, is for more investment in research into childhood cancers

The RCN has said it would staff chemotherapy, emergency cancer services, dialysis, critical care units, neonatal and paediatric intensive care during the strikes.

Some areas of mental health and learning disability and autism services are also exempt, while trusts have been told they can request staffing for specific clinical needs.

When it comes to adult A&E and urgent care, nurses will work Christmas Day-style rotas. Some decisions are likely to be taken on a local level and on a case-by-case basis.

Sources said there had been no contact between the RCN and the Department of Health since talks broke down on Monday.

Ms Cullen accused Health Secretary Steve Barclay of ‘belligerence’ after he refused to discuss the issue of pay.

The Government insists it will not increase its 4 per cent offer – equivalent to a £1,400 pay rise – which was the amount recommended by the independent pay review body.

Mr Barclay said nurses were ‘incredibly dedicated to their job’ and ‘it is deeply regrettable some union members are going ahead with strike action’.

He added: ‘My number one priority is to keep patients safe – I’ve been working across government and with medics outside the public sector to ensure safe staffing levels – but I do remain concerned about the risk that strikes pose to patients.

‘Nevertheless, the NHS is open and patients should continue to seek urgent medical care – and attend appointments – unless they’ve been contacted by the NHS.’

He said paying nurses more ‘would mean taking money away from frontline services at a time when we are tackling record waiting lists as a result of the pandemic.’

The RCN has been calling for a pay rise at 5% above inflation, though it has indicated it would accept a lower offer.

When it submitted the 5% figure to the independent pay review body in March, inflation was running at 7.5%.

But inflation has since soared, with RPI standing at 14.2% in September.

Meanwhile, in Scotland RCN members are being consulted on a revised pay offer from the Scottish government.

Ms Cullen said: ‘Nurses are not relishing this, we are acting with a very heavy heart.

‘It has been a difficult decision taken by hundreds of thousands who begin to remove their labour in a bid to be heard, recognised and valued.

‘It is a tragic first for nursing, the RCN and the NHS.

‘Nursing staff on picket lines is a sign of failure on the part of governments.

‘Our commitment to patients and safe care means that vital services are kept running.

‘The scaremongering we have seen did upset some but also demonstrated the disrespect afforded to nurses for raising their voice.

‘My plea to patients is to know that this strike is for you too – it’s about waiting lists, treatments that are cancelled year round and the very future of the NHS.’

Saffron Cordery, interim chief executive of NHS Providers, told the PA news agency NHS trusts were ‘pulling out all the stops’ to lessen the impact on patients.

She said: ‘The picture will vary across the country as trust leaders work out service levels with unions locally.

‘But it’s inevitable that some operations or appointments will have to be rescheduled and trusts are pulling out all the stops to minimise disruption.

‘The cold snap has ramped up demand that was already at or close to record levels, but on strike day NHS trusts will do everything they can to ensure that essential services are properly staffed and patient safety, always the number one priority, is safeguarded.’

Several trusts have already given details of cancelled outpatient appointments and planned treatments.

The Western Trust in Northern Ireland said it had ‘regrettably taken the decision to cancel some non-emergency services’, with 587 outpatient appointments postponed across Altnagelvin Hospital, Omagh Primary Care and Treatment Centre and South West Acute Hospital.

Some eight planned inpatient and day case procedures have also been cancelled.

In Wales, the Welsh Government said non-urgent or routine appointments are likely to be postponed.

Meanwhile, the Walton Centre NHS Foundation Trust, the only specialist hospital trust in the UK dedicated to neurology, neurosurgery, spinal and pain management services, said outpatients and some elective treatments have been postponed or cancelled, but other patients should attend as normal.

Kettering General Hospital said it will be ‘stepping down some planned services and those patients affected will be contacted directly by our hospital’.

The British Medical Association has urged GPs not to support NHS requests to provide cover for striking nurses, warning it would ‘undermine’ the RCN and could harm the wellbeing of GP practice staff.

The BMA’s GP committee said practices were themselves overstretched and providing cover would lead to longer waiting times and potentially leave patients at risk.

Patricia Marquis, the RCN’s nursing director for England, told Times Radio it might be too late to call off the strike planned for next Tuesday.

Mr Lynch, whose union has brought trains to a standstill this week, expressed his support for striking nurses.

He said: ‘We send our heartfelt solidarity to the nurses and their union on their historic strike tomorrow, along with our heroic postal workers who are striking on issues very similar to our own.’

NHS England said patients should continue to come forward for the care they needed during industrial action, including calling 999 during an emergency. Those due to have an operation should attend unless they have been told in advance that it has been cancelled – however, there is no guarantee it will go ahead.

Ambulance staff are due to strike next Wednesday also in a row over pay but government sources say talks are proving difficult, with union leaders keeping trusts in the dark about how many staff they will allow to work and what type of calls they will respond to.