An ‘aspirin a day’ for cancer patients makes them 25% more likely to survive their battle, researchers claim

Scientists found cancer patients already taking low dose of aspirin were up to 25 per cent more likely to be alive at any time after diagnosis.

Many older people are already currently advised by doctors to take the cheap, over-the-counter pills daily, particularly to prevent strokes. 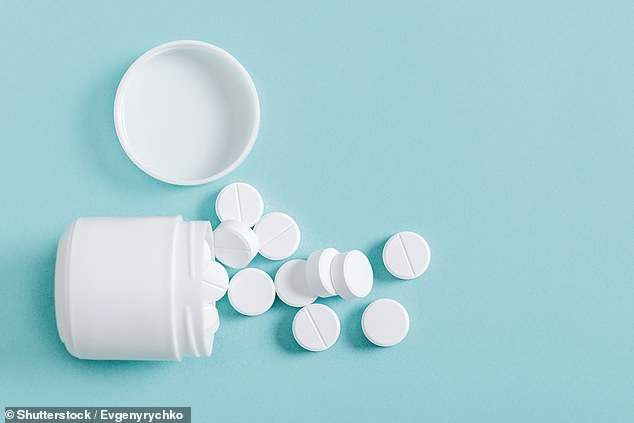 The Cardiff University research, which analysed 71 studies of aspirin’s effects, indicated the drug should be taken far more widely.

Lead researcher Professor Peter Elwood said: ‘The use of low-dose aspirin as a preventive in heart disease, stroke and cancer is well established.

‘But evidence is now emerging that the drug may have a valuable role as an additional treatment for cancer too.’

Survival rates of 120,000 cancer patients taking aspirin were compared with those of 400,000 patients who did not.

Almost half the studies involved patients with bowel cancer, while breast and prostate cancer accounted for most of the rest.

Very few of the patients suffered from serious stomach bleeding, a known potential side-effect of aspirin.

DO WE ALREADY KNOW THAT ASPIRIN CAN HELP FIGHT CANCER?

Taking just a quarter of an aspirin tablet a day could slash the risk of bowel cancer by a fifth, a major study concluded in March 2016.

Harvard scientists found middle-aged people who regularly took the painkillers were less likely to be diagnosed with cancer of any kind.

They found the cheap pills, which cost less than 2p per tablet, are particularly effective at warding off cancers of the digestive system.

The most dramatic impact was seen for bowel cancer, with people who took aspirin every day for six years seeing their risk drop by 19 per cent.

The experts, who tracked 136,000 people for 32 years, predicted that regular aspirin use in the US could prevent 30,000 tumours a year.

The proportion of aspirin users experiencing a serious bleed was no greater than the proportion suffering a bleed due to other causes.

The research published in PLOS Medicine said the review showed a reduction of deaths by 25 per cent in colon cancer, 20 per cent in breast cancer and around a 15 per cent reduction in prostate cancer deaths.

The authors wrote ‘There is also evidence of a substantial reduction in the incidence of metastatic spread of these cancers, together with a reduction in all-cause mortality across all the cancers.’

Professor Elwood added: ‘Patients with cancer should be given the evidence now available and be helped to make their own judgment of the balance between the risks and the benefits of daily low dose.

‘Evidence from further studies is urgently required, and patients should be strongly encouraged to participate in appropriate research studies.

‘All patients should consult their GP before starting new medication.’

Aspirin is also taken as a preventive medicine in some cases of heart disease.

But earlier this month research by Monash University in Australia found that in healthy people, taking aspirin did not cut the risk of a heart attack or a stroke.