Do YOU keep eating when you’re full? Brain’s urge to carry on is stronger than its signal to stop

If you struggle to stop eating even when you’re full, scientists may finally have the answer you’ve been waiting for.

The way the brain is wired means the signal to keep stuffing your face is stronger than the one telling you to stop, a study has found.

And even when the brain sends out a sign saying the body is full, it can trigger an overpowering keep-eating sign at the same time.

But researchers have now found a drug that could produce the stop signal in the brain, slashing the amount of food you scoff down. 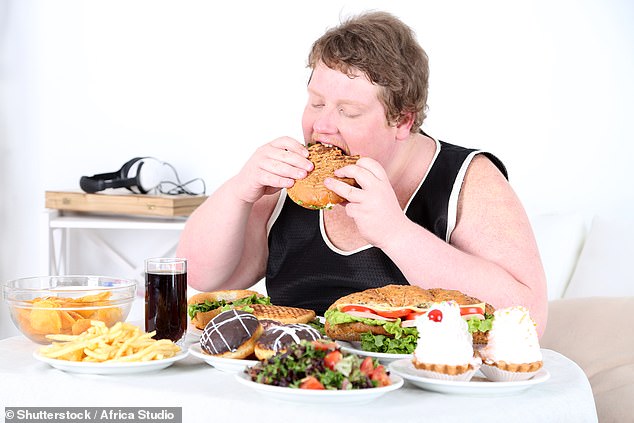 An experiment on mice by researchers at the University of Michigan has discovered a link between opioids and appetite.

It revealed the overdose drug naloxone, which is used to block the effects of heroin or morphine in people who take too much, could curb people’s over-eating.

Naloxone can target nerve cells to turn on the brain’s ‘brake’, telling the body to stop eating without also triggering the stronger signal telling it to eat more.

The nerve cells scientists examined are in the hypothalamus in the brain, an area which is known to control eating habits.

Although the study was entirely done on rodents, the researchers hope the same processes will apply to the human brain.

When researchers tried to activate the nerves individually using lasers, the stop-eating sign would automatically trigger the keep-eating sign which overpowered it.

WHAT IS THE GLOBAL OBESITY CRISIS?

Almost a quarter of the world’s population will be obese in less than 30 years, according to research published in May.

If obesity trends continue, 22 per cent of people around the world will be severely overweight by 2045, up from 14 per cent last year, a study found.

One in eight people, rather than today’s one in 11, are also expected to develop type 2 diabetes over the same period, the research adds.

People with type 2 diabetes have an average life expectancy of just 55 due to them being at a much higher risk of heart attacks, stroke and kidney disease.

Tam Fry, a health campaigner from the National Obesity Forum said the findings were ‘desperately sad’.

It was unclear how the brain’s ‘stop’ and ‘go’ buttons for eating were linked, but triggering ‘go’ was found to also activate the brain’s opioid system.

The opioid system is where painkillers like morphine are targeted – and it’s also the same area which controls addiction.

Discovering the link between appetite and the opioid system meant the researchers could use a drug already designed to target that area to stop the mice eating so much.

They said once a mouse had taken naloxone there was a ‘rapid and significant decrease’ in how much food it ate.

Obesity is a growing problem around the world and nearly a quarter of the global population is expected to be obese within 30 years.

A quarter of adults in the UK are already obese, as well as 40 per cent of Americans and around 28 per cent of Australians.

Study author Professor Huda Akil said: ‘There’s a whole industry built on enticing you to eat, whether you need it or not, through visual cues, packaging, smells, emotional associations.

‘People get hungry just looking at them, and we need to study the neural signals involved in those attentional, perceptional mechanisms that drive us to eat.’

The research was published in the journal Proceedings of the National Academy of Sciences.