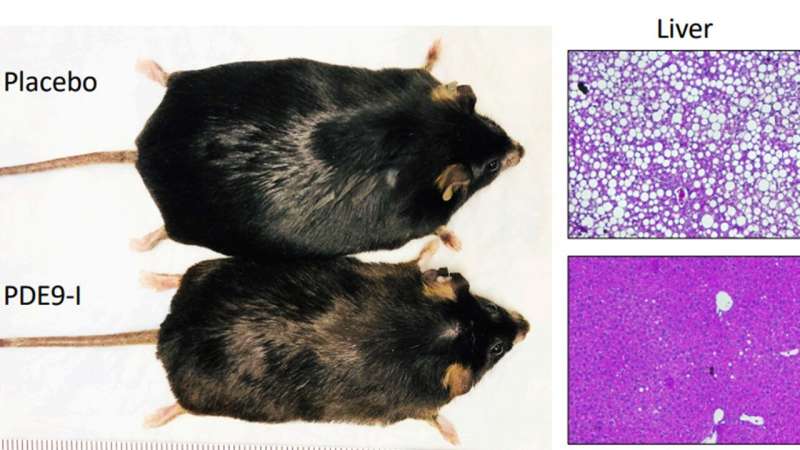 Researchers at Johns Hopkins Medicine have found that a drug first developed to treat Alzheimer’s disease, schizophrenia and sickle cell disease reduces obesity and fatty liver in mice and improves their heart function—without changes in food intake or daily activity.

These findings, published in the Journal of Clinical Investigation, reveal that a chemical inhibitor of the enzyme PDE9 stimulates cells to burn more fat. This occurred in male mice and in female mice whose sex hormones were reduced by removing their ovaries, thus mimicking menopause. Postmenopausal women are well known to be at increased risk for obesity around their waist as well as at risk for cardiovascular and metabolic disease.

Inhibiting PDE9 did not cause these changes in female mice that had their ovaries, so female sex hormone status was important in the study.

“Currently, there isn’t a pill that has been proven effective for treating severe obesity, yet such obesity is a global health problem that increases the risk of many other diseases,” says senior investigator David Kass, M.D., Abraham and Virginia Weiss Professor of Cardiology at the Johns Hopkins University School of Medicine. “What makes our findings exciting is that we found an oral medication that activates fat-burning in mice to reduce obesity and fat buildup in organs like the liver and heart that contribute to disease; this is new.”

This study follows work reported by the same laboratory in 2015 that first showed the PDE9 enzyme is present in the heart and contributes to heart disease triggered by high blood pressure. Blocking PDE9 increases the amount of a small molecule known as cyclic GMP, which in turn controls many aspects of cell function throughout the body. PDE9 is the enzyme cousin of another protein called PDE5, which also controls cyclic GMP and is blocked by drugs such as Viagra. Inhibitors of PDE9 are experimental, so there is no drug name yet.

Based on these results, the investigators suspected PDE9 inhibition might improve cardiometabolic syndrome (CMS), a constellation of common conditions including high blood pressure; high blood sugar, cholesterol and triglycerides; and excess body fat, particularly around the waist. CMS is considered a pandemic by medical experts and a major risk factor for heart disease, stroke, type 2 diabetes, cancers and COVID-19.

While PDE9 inhibitors remain experimental, they have been developed by several pharmaceutical companies and tested in humans for diseases such as Alzheimer’s and sickle cell. The current mouse study used a PDE9 inhibitor made by Pfizer Inc. (PF-04447943) that was first tested for Alzheimer’s disease, though eventually abandoned for this use. Between the two reported clinical trials, over 100 subjects received this drug, and it was found to be well tolerated with no serious adverse side effects. A different PDE9 inhibitor is now being tested for human heart failure.

To test the effects of a PDE9 inhibitor on obesity and cardiometabolic syndrome, the researchers put mice on a high-fat diet that led to doubling their body weight, high blood lipids and diabetes after four months. A group of female mice had their ovaries surgically removed, and most of the mice also had a pressure stress applied to the heart to better mimic cardiometabolic syndrome. The mice were then assigned to receive either the PDE9 inhibitor or a placebo by mouth over the next six to eight weeks.

In female mice without their ovaries (a model of postmenopause), the difference in median percent weight change between the drug and placebo groups was -27.5%, and in males it was -19.5%. Lean body mass was not altered in either group, nor was daily food consumption or physical activity. The PDE9 inhibitor lowered blood cholesterol and triglycerides, and reduced fat in the liver to levels found in mice fed a normal diet. The heart also improved with PDE9 inhibition, with ejection fraction (which measures the percentage of blood leaving the heart each time it contracts) relatively higher by 7%–15% and heart mass (hypertrophy) rising 70% less compared with the placebo. An increase in heart mass is evidence of abnormal heart stress. However, having this lowered by the inhibitor indicates stress on the heart was reduced.

The investigators found PDE9 inhibition produces these effects by activating a master regulator of fat metabolism known as PPARa. By stimulating PPARa, levels of genes for proteins that control fat uptake into cells and their use as fuel are broadly increased. When PPARa was blocked in cells or the whole animal, the effects from PDE9 inhibition on obesity and fat-burning were also lost. They found estrogen normally plays this role of PPARa on fat regulation in females, but when its levels fall like they do after menopause, PPARa becomes more important to regulate fat and so PDE9 inhibition has a greater effect.

“The finding that the experimental drug did not benefit female mice that had their ovaries shows that these sex hormones, particularly estrogen, had already achieved what inhibiting PDE9 does to stimulate fat-burning,” notes Sumita Mishra, the research associate who performed much of the work. “Menopause reduces sex hormone levels, and their control over fat metabolism then shifts to the protein regulated by PDE9, so the drug treatment is now effective.”

According to the U.S. Centers for Disease Control and Prevention, more than 40% of people living in the U.S. are obese; and 43% of American women over the age of 60—long past menopause—are considered obese.

Kass notes that if his lab’s findings in mice apply to people, someone weighing 250 pounds could lose about 50 pounds with an oral PDE9 inhibitor without changing eating or exercise habits.

“I’m not suggesting to be a couch potato and take a pill, but I suspect that combined with diet and exercise, the effects from PDE9 inhibition may be even greater,” says Kass. The next step would be testing in humans to see if PDE9 inhibitors produce similar effects in men and postmenopausal women.